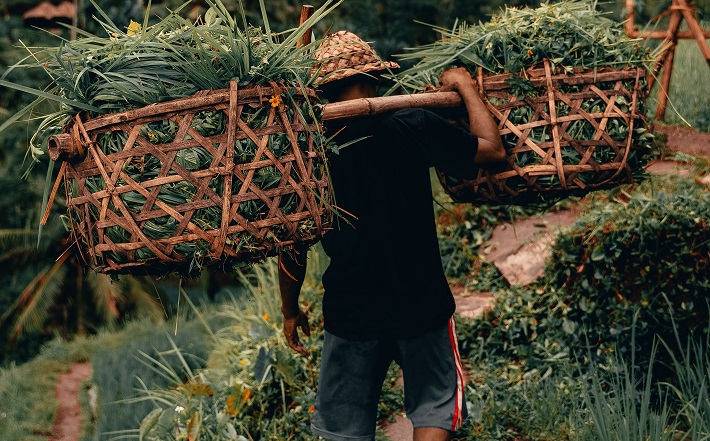 Similar to other acrostic psalms in the Psalter (see also 25; 34; 37; 111; 112; and 119), each line in Psalm 145 begins with the subsequent letter in the Hebrew alphabet (aleph, beth, gimel, etc.). More than simply a mnemonic device, however, such a construction points to a careful and deliberate reflection on the topic at hand, for example, God’s rule in the world. To underscore the sweeping nature of God’s divine kingship, the Hebrew term kol (“all”) appears 17 times throughout the 21 verses. At times, it refers to God and God’s actions in the world (for example, verses 10, 13c, 13d, 17), while at other times, it refers to those who are the recipients of those actions (for example, verses 9a/b, 12a, 18a/b). The final verse announces that “all” flesh will bless God’s name (verse 21). From beginning to end, from aleph to tav, this psalm is relentless in its confession of the kingship of Yahweh.

In addition to the repeated use of “all,” a vocabulary of praise appears with considerable regularity. Its repetition in the first half of the psalm is striking (see verses 1b, 2a, 2b, 3a, 4a, 4b, 5b, 6a, 6b, 7a, 7b, 10a, 10b, 11a, 11b, and 12a) and the psalm returns to this theme yet again in the final verse (verses 21a and 21b). The psalmist employs a variety of Hebrew terms across these 18 occurrences, each referring to praising or speaking/singing praise. Those involved in the act of confessing and praising include: the psalmist (verse 1b), the “generations” (verse 4a), Yahweh’s works (verse 10a), the “faithful people” (verse 10b), and every creature (verse 21b). While they appear unrelated, the frequency of “all” (kol) and the many and varied uses of terms from the vocabulary of praise reinforce the rhetorical thrust of Psalm 145: all of creation is enjoined to praise the Divine King (verse 21).

The lectionary text invites the reader to consider the fullness of the kingdom of God in verses 11-13, but the presence of the verses that appear immediately before and those that follow (verses 8-10, 14) serve as a reminder that conversation about the kingdom of God cannot be divorced from conversation about the character of God. It is the latter that makes possible our inclusion in the former.

In verses 8-9, the psalmist appropriates familiar language, that of Yahweh’s self-revelation found in Exodus 34:6-7. The robust theological confession is matched by its careful poetic structure. Regrettably, the assonantal nature of the opening confession in Psalm 145:8a is lost in translation. The Hebrew reads, hanun werahum YHWH, “Gracious and merciful is YHWH.” The repetition in sound reinforces the close coupling of these qualities within the character of this God. This King is marked by hanun werahum, grace and mercy, and we are the beneficiaries. The second line in verse 8 celebrates the long suffering of Yahweh and his great hesed—both terms together stress the unrelenting solidarity of this God towards his people.

In Exodus 34, this confession follows the scene of the golden calf and the giving of new law tablets to the community gathered at Sinai. While the appropriation of the Exodus 34 language has been decoupled from its specific place in the narrative of Israel, the force of its confession and the object of its confession in Psalm 145 remain squarely in view—with perhaps one exception. Following the same rehearsal of divine attributes (verse 8), the psalmist extends that confession to suggest that Yahweh is “good to all and that his compassion is over all of his works” (verse 9). That which defined a God encountered on the side of a mountain has now become descriptive of the Divine King who encounters “all” even as he rules over all (verse 13).

By concluding with verse 14, the lectionary reading leads the worshiper to reflect again upon the character of the one whose kingdom “endures throughout all generations.” To confess that God is king (verse 1) is to believe in God’s preferential concern for the poor and the vulnerable—for “all” of them. The psalmist confesses God’s concern for “all” those who are falling down and “all” those who are “bowed down” (NRSV; NIV). The latter term comes from the root kapap, “to bow down,” but as a passive participle in this instance, perhaps we would do better to render it as ”those who have been bowed down,” as those whose station in life can be attributed to the deleterious actions of another (see also Psalm 146:8). The good news, the gospel, of this psalm and all of Scripture is that this King always stands with those who are falling down and those who are being forced down (see also Matthew 11:28-30). For those who find themselves falling down, they will be “held up” (samek) and supported by this King and those who have been forced down by another will be lifted up by this God. A similar confession is found in Psalm 113:7, where God “raises the poor from the dust and lifts up the needy from the ash heap.” The image is striking: the one who has all the power willingly expends it upon those who have none. How could we do other than live in unrelenting praise of such a God?

The confession made here in verse 14 is not an isolated instance or a singular expression of divine concern, but rather a culminating claim focused on the very nature of this Divine King. From beginning to end, this “theology of the poor” permeates the Psalter, and for those of us who read these texts and seek to preach them faithfully, we cannot escape this claim—nor should we. Such a claim is rooted in the very character of God and emblematic of the nature of his kingdom.

Verses 11-14 function as the heart of the psalm, both literally and figuratively. Four times the word “kingdom” (malkut) is employed, with the latter two instances (verse 13) offering a descriptive assessment of the enduring nature of this kingdom. The first two references, however, shift the focus to the “all”—and the necessity of testimony about the kingdom. People are to “speak of the glory of [God’s] kingdom” and they are to make known to “all” people “the glorious splendor” of God’s kingdom (verses 11a and 12b). To know this God and to live in this kingdom is to be a people marked by testimony and confession. To declare God as king, to be recipients of his hanun werahum, is to take on the role of witness.

In this text, although Jesus is referring to the generation of his time, it seems it could just as easily be addressed to our generation.

Romans 7 has played a crucial role in Christian anthropology.1
Print All Text Print All Commentary

Rest for Your Soul