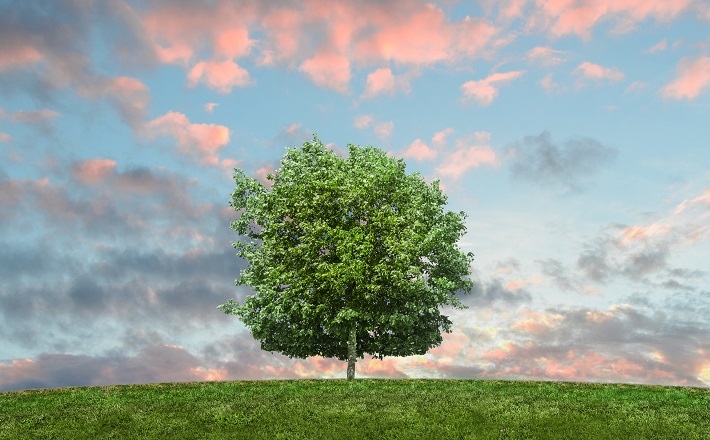 Upon closer examination, the story of God’s confrontation with the man and woman in Genesis 3 shares with the other readings a theme of choice: the choice between listening to God or listening to other voices.

Genesis 3:8 resumes the episode of the man and woman after having eaten of the fruit from the tree of the knowledge of good and evil in the middle of the garden, in direct violation of God’s command.1 Subsequently, their eyes were opened to their state of nakedness and they clothed themselves with fig leaves (Genesis 3:1-7). Now the couple hears the sound of God walking in the garden at the time of the evening breeze. The Hebrew word for “breeze” is the same for “wind,” “breath,” or “spirit.” The breeze here suggests a cool, comfortable gentle wind — a welcome reprieve from the typically hot, arid climate of the southern Levant, or Transjordan.

The reader is immediately struck by the image of a deity with human characteristics. The Hebrew word translated in English as “sound,” also means “noise,” “voice,” “thunder,” and even “message” or “proclamation.” The reader might not have been surprised by the notion of the sound of God.

Portrayals of God appearing in theophanic form as a reverberating sound of thunder causing mountains and trees to quake is a common one in the Old Testament. However, conjuring the sound of dry leaves or twigs crushing under the deity’s feet as God walks through the garden may take a little more imagination. Yet, one of the arguments for the use of different sources to compose the Torah/Pentateuch is the characteristic anthropomorphic view of the deity (for example God walks and talks to humans) in the creation account in Genesis 2, in contrast to the more distant, majestic vision of God in Genesis 1.

The anthropomorphic characterization of the deity out walking suggests that God may have been seeking out the communion of the humans. However, the man and woman hide themselves among the trees in the garden when they hear God approaching (Genesis 3:8b). One may envision paradise when they think of the garden of Eden. Eden for me calls to mind the stunningly beautiful botanical gardens at the Garfield Park Conservatory in Chicago, Illinois. In fact, the Hebrew term gan for “garden” was translated from the Hebrew to Greek as paradeisos, “paradise.”2 This image is likely why commentators often refer to Genesis 3 as paradise lost.

Naked and afraid
The suspense builds when God calls out to the man inquiring of his whereabouts. “Where are you?” God asks (Genesis 3:9). On one level, the anthropomorphic terms used to describe God’s encounter with the humans suggests a level of intimacy that Christians often do not typically associate God.

Although Christians frequently use language that describes Jesus in familiar terms — the hymn “In the Garden” comes to mind — where the hymnodist writes that “[Jesus] walks with me and talks with me and tells me I am his own,” God is more often spoken of in grander terms as omnipotent, omniscient, and omnipresent. On another level, some scholars regard this scene in more confrontational terms, comparing the inquiry to a subsequent episode where God asks Cain, “Where is your brother, Abel?” (Genesis 4:9 New Revised Standard Version). The implication in Genesis 3:9, as in the story of Cain and Abel, is that the man is on trial and must give an account of his actions.

The man answers that he heard the sound of God, a reference back to verse 8, except there, both the man and woman heard the sound of God. Now, the man replies in a string of first-person singular verbs: “I heard,” “I was afraid,” “I was naked,” “I hid” (verse 10). God, who is often portrayed metaphorically as a judge, is more like a prosecuting attorney examining here the witness: “Who told you that you were naked? Have you eaten from the tree of which I commanded you not to eat?” (Genesis 3:11), implying that God already knows the source of the man’s new-found awareness.

The man does not respond directly to God’s questions. Yet, he infers that he knows that he is naked because he ate of the fruit from the tree, but he doesn’t accept responsibility for his deed. Rather, he indirectly blames God, by implying that if God had not given the woman to him as a companion, he would not have eaten of the fruit that she gave him (verse 12). God does not inquire any further of the man but instead interrogates the woman for her complicity in the act. She in turn blames the serpent for having deceived her into eating the fruit (verse 13).

Up to this point the serpent had gone unnoticed, but God resumes the role of judge to pronounce judgment on the snake. God curses the serpent, the only animal to be so judged, to crawl upon its belly and eat dust (Genesis 3:14). Furthermore, God announces that the offspring of the serpent and the woman would be adversaries striking one another (verse 15). Of the three protagonists, only the serpent is cursed.

The woman’s decision to listen to the serpent has dire consequences for the couple. Yet, contrary to later interpretations, the woman is not responsible for the origin of sin in the world (compare to Sirach 25:24) or the “fall” of humankind. In fact, neither the words “sin” nor “fall” appear in the narrative. Nevertheless, God’s interrogative, “Who told you that you were naked?” is a cautionary reminder to take heed to who’s voice you choose to listen to.