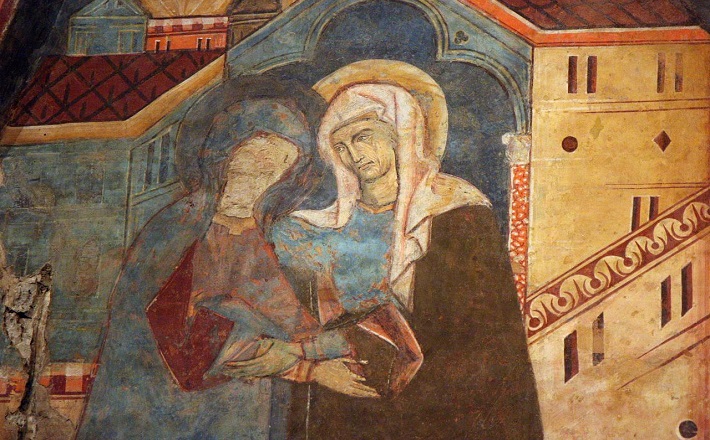 Mary magnifies the Lord, proclaiming God’s greatness and rejoicing in God as Savior. She begins with God’s actions in her own life, for in choosing her to be the mother of the messiah, the Mighty One has indeed “done great things for” her. Elizabeth has just welcomed and honored her, saying, “blessed is she who believed.” Now she recognizes with awe that not only Elizabeth but all generations will call her blessed.

In our culture #blessed has become a meme, and “feeling blessed” makes regular appearances in Facebook posts. People tweet images or post pictures of themselves enjoying a delicious meal or an exotic vacation or a shopping spree at their favorite store. “Blessed” has come to mean living a life of privilege and comfort. Using the term has become a way of celebrating those moments when everything is going well and all seems right with the world — or at least one’s own little corner of it.

The blessedness that Mary celebrates stands in stark contrast to our culture’s attitude. By our standards she does not look at all blessed. God has chosen her to be the mother of the messiah, but in practical terms what does that mean for her? She is not from a family that can afford expensive food or clothing. She is a nobody, a peasant girl from a small village. Her friends and neighbors see her as a disgrace because she is unmarried and pregnant (see Joseph’s initial reaction to her pregnancy in Matthew 1:19). Furthermore, as she will soon learn from Simeon if she hasn’t perceived it already, being the mother of the messiah is scarcely an unmixed blessing. She will bear the unspeakable grief of watching as her son is rejected, shamed, and crucified: “This child is destined for the falling and rising of many in Israel … and a sword will pierce your own soul too” (Luke 2:34–35). Despite all this, Mary praises God for honoring her.

Furthermore, she perceives God’s action in her life as consistent with God’s saving action in history. The Mighty One’s agenda differs radically from the plans of human rulers. Mary’s celebration of God’s strong arm recalls Hannah’s song in 1 Samuel 2:1–10. Like Mary, Hannah experienced a miraculous pregnancy. Like Mary’s son, Hannah’s son Samuel spoke God’s word. Both Hannah and Mary praise God for overturning society’s structures by bringing down the powerful and lifting up the powerless. Mary’s song does not share Hannah’s militaristic imagery, however, for Mary’s son will bless not the makers of war, but the peacemakers.

Mary sings about the God who saves not just souls, but embodied people. The God she celebrates is not content merely to point people toward heaven; God’s redemptive work begins here on earth. God fills the hungry not only with hope, but with food. Rather than being satisfied with comforting the lowly, Mary’s Lord lifts them up, granting them dignity and honor, a seat at the table and a voice in the conversation. At the same time, God shows strength by disrupting the world’s power structures, dethroning rulers, and humbling the mighty.

Clearly such saving acts are good news for the poor and lowly, but what does Mary’s song mean for the wealthy and the powerful? Is there nothing but judgment for them? Though judgment and salvation may seem like opposites, they go hand in hand. Those who stand in awe only of themselves and their own power will be judged. Yet if the wealthy and powerful can only see it, by bringing them down — by emptying and humbling them — God is saving them. When they turn their gaze from themselves and their own accomplishments, when their awe is directed to God — then there is mercy for them, too.

Both in Mary’s song and in Jesus’ ministry we see the God who loves us as we are but does not leave us as we are. Zacchaeus, for example, shows us God’s saving love in action. As a tax collector, Zacchaeus is wealthy, but he is also a scorned outsider. When Jesus invites himself to dinner at Zacchaeus’s house, the encounter leaves Zacchaeus welcomed into community, emptied of his wealth, and profoundly changed. His gaze is redirected from himself toward Jesus. He no longer sees only his own needs and desires. Now he sees those whom he has harmed in his quest for money and security. Jesus brings Zacchaeus down from his wealth and up from his shame. In the process he frees him. Salvation has come to his house (Luke 19:9).

When God empties the rich of their excess and fills the hungry with good things, the result is not social reversal — with the powerless and the powerful changing places — as much as it is social leveling. The rich and powerful are stripped of their arrogance and taught to love their neighbors as they love themselves. Thus God provides for the poor and honors the humiliated. When the arrogant are scattered and the powerful brought down, then every person has access to enough of the world’s resources, and no one has too much. Every person is treated with dignity and respect, and no one uses power to harm.

Mary’s song magnifies the Savior who loves the whole world with a love that makes creation whole. God’s saving judgment is for all of us, bringing us down from the pride that fills us with ourselves until we can’t see either God or neighbor, bringing us up from the shame that distorts our worldview and convinces us that no one — not even God — could love us. The mother of the Messiah has experienced God’s blessing. She is not #blessed. Her blessing, like ours, is a cross-shaped blessing, “a condition of complete simplicity (costing not less than everything)” as T. S. Eliot so memorably said, yet bringing true freedom, the priceless gift of God’s salvation.