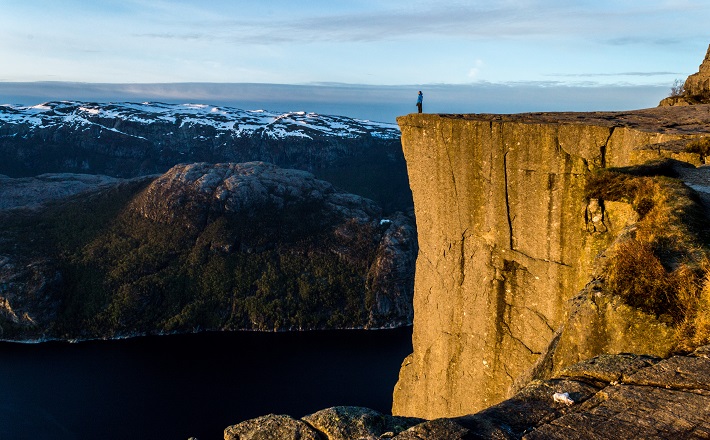 Be to me a rock of refuge, a strong fortress, to save me, for you are my rock and my fortress.Photo by Pierre Bouillot on Unsplash; licensed under CC0.
February 3, 2019

This week, however, the focus is much more pronounced on the bad news side. The designers of the lectionary split apart a story that, to my mind, runs rightly from Luke 4:14-30. The artificial split at 4:21/22 seems to give two very different impressions: one favorable, one unfavorable. Luke, however, is a much more interesting theologian than people give him credit. There is a tragic element to his way of telling the story of Jesus. This Jesus is the sign, says wise old Simeon, who will be spoken against (Luke 2:34). There is, even in this gracious, good news sermon, a split reaction that includes both “rising and falling.”

Gracious? Yes, though the word is not mine, but comes from Luke’s own narration of the synagogue hearers in Nazareth: “All spoke well of him and were amazed at the gracious words that came from his mouth.” Some scholars argue that the word gracious here is really understood more from the perspective of eloquent wisdom, hence “from his mouth.” Others note, as I do, that we see in Luke 4:14-30 a broader, preceding announcement that rings with the words of the prophet Isaiah, a strange grace1 perhaps even in the sense of divine favor. It may sound strange, but Luke has Jesus preach his first sermon in the mode of prophetic grace.

The problem is when that grace, that divine favor, meets up with privilege. For another thing that prophets do is to see into people’s hearts. And Jesus here in 4:23ff. seems to recognize in his hearers how they will react even before they realize it. The home town hearers go from amazement to consternation with great rapidity. No doubt, the hearers are helped along by Jesus’ use of a proverb about physicians which he pairs with another about the fate of prophets in their own hometowns. Jesus, perhaps even before his hearers have realized it, knows his words of prophetic grace will meet with rejection — even right here in his home town synagogue.

The danger here for preachers, especially Gentile ones today, is a breezy over-generalization about Jews. It is far too easy to turn Luke’s tragic Gospel, where a Jewish Jesus meets with both acceptance and rejection, into a modern anti-Semitic one. Preachers need to remember how Christianity emerges as a group within Judaism. That’s why Jewish roots and stories matter (think of Simeon and Anna or Elizabeth and Zechariah in Luke 1-2). Jesus is Jewish through and through. A telling of the story that overgeneralizes the first-century struggle and pain described here does not preach gospel, but simply obscures and erases the other. This would add injury to insult by passing over the prophetic grace that is summoned from the great prophets of Israel, too.

Even then, Jesus is indeed pushing his home-town hearers hard. He notes the outsider message that his own Jewish tradition embraces about Elijah and Elisha, both of whom did miracles far away from home towns and among people who had no right to presume upon prophetic words either. You see, the struggle here is that the words of prophetic grace meet up in the synagogue with an entitlement that fails to appreciate “today’s” announcement in Jesus. The questions preachers should ask is how that prophetic grace, offered in the person of Jesus, sounds in terms of our own sense of privilege and entitlement today. Good news is bad news is good news.

So where exactly is the good news? There does not seem to be too much of it in the second half of this text from Luke 4, but it is there. The one who is decisively rejected for his announcement of prophetic grace in his person, is led out of the synagogue, thrown out of town, and all but tossed over the cliff in judgment. Except, he isn’t, ultimately. Here, the text speaks in terms reminiscent of resurrection mystery. Jesus “passed through the midst of them and went on his way” (Luke 4:30).

The good news of the gospel in Luke is tied to the person of Jesus, who is still both crucified and risen. We are not promised any easier fate than is our Lord, who preached prophetic grace, dealt with rejection, and still managed to be on his way. You’ve probably heard that the great preacher and activist Rev. Dr. Martin Luther King, Jr. was frequently fond of paraphrasing Reverend Theodore Parker, “The arc of the moral universe is long, but it bends toward justice.”2 The way King uses it, of course, is not for the sake of resignation, as if we could sit back and let historical determinism have its way. It is, however, from King’s prophetic mouth a balm to those in the struggle. For all the difficulties of preaching prophetic grace, it bespeaks a purpose larger than our own, one capable of passing through rejection and still being on its way.

Despite the limited number of verses included from this psalm in the lectionary, Psalm 71 nevertheless provides us with a unique opportunity to learn from the faith and life experiences of an elder psalmist.1

1 Corinthians 13 is considered one of the most frequently-cited chapters.
Print All Text Print All Commentary