“For where your treasure is, there your heart will be also” (Matthew 6:21). 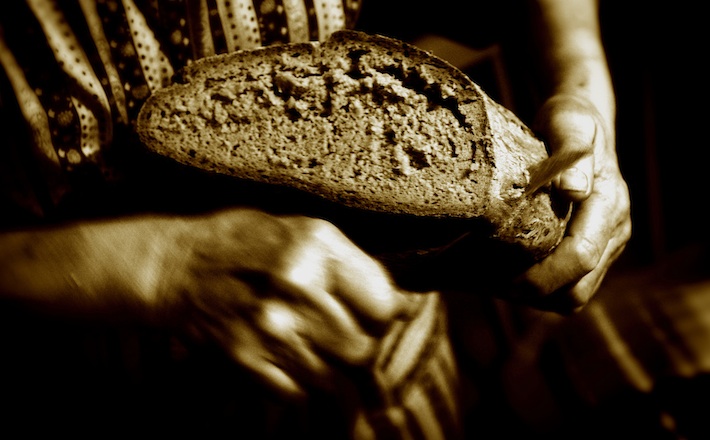 to cut the bread, from Art in the Christian Tradition, a project of the Vanderbilt Divinity Library, Nashville, Tenn. Original source.
February 3, 2019

“For where your treasure is, there your heart will be also” (Matthew 6:21).

The aphorism is not unfamiliar for preachers. Yet how many of us have connected it to the model of prayer provided by Jesus in verses 7-13?

Jesus instructs his disciples not to overvalue the inflated language of the Gentiles, but to pray with simplicity because God already knows what they need before they ask. His prefatory remarks have an economic dimension to them by implying that worthwhile prayers unfold efficiently and come straight from the heart. Though Matthew 6:21 follows verses that directly speak about the impermanence of physical possessions, its connection to the preciousness of prayer seems quite clear. Faithful prayers do not waste words. They also mine the riches of what is known by God in the heart.

The advice from Jesus is also not incidental. At the time, Jewish customs expected adult males to pray morning and evening, three times in the direction of Jerusalem, before and after meals, and in postures such as bowing and standing (Dennis C. Duling, Harper Collins Study Bible, Matthew, note for verse 6:5). That is an awful lot of praying. There was a lot of room to reach for fluffy phrasing or worry about making a mistake. So, Jesus clears the air not only with advice, but also with a paradigm of prayer. Verse 9 begins, “Pray then in this way: Our Father in heaven.”

New Testament scholar Ulrich Luz points out that in Matthew’s prayer, Jesus uses the language of the people, Aramaic, rather than the language of the synagogue, Hebrew. The vocalization of the prayer therefore re-articulates the importance of being direct. Luz also states that the prayer does not encapsulate Christian belief, doctrine, or dogma. It is not a theological statement, but a model to help others to pray. It makes prayer possible (Hermeneia: Matthew 1-7).

Furthermore, the prayer in Matthew is not the Lord’s Prayer. The Lord’s Prayer is a kind of remix of teaching and prayers found in Matthew, Mark 11:25, and Luke 11:1-4. In a way, the Lord’s Prayer is a Gentile prayer with ornamental language. While the doxology found in the Protestant version of the Lord’s Prayer – “For thine is the kingdom, the power, and the glory, for ever and ever” – is not an “empty phrase,” recognizing the difference between the paradigm Matthew presents and what has become ecclesial custom becomes informative for preachers today seeking to understand what Jesus shares in the passage.

By locating God above all, acknowledging the name of God as holy, privileging God’s kingdom and will, and petitioning for the gifts of daily bread, forgiveness, mercy to those in our debt, and deliverance from trial and the wicked, the prayer of Matthew 6 provides a remarkably streamlined, but robust and clear outline for what prayers ought to include. It is also scaffolding to unlock the architecture of later verses.

Pious actions discussed in verses 14-20 rely upon the purposes of prayer laid out in 10-13. The warning to forgive with abandon (Matthew 6:14-15), instructions to fast with nonchalance (Matthew 6:16-18), and caution to resist stockpiling stuff (Matthew 6:19-20), read as embodied interpretations of Matthew’s prayer. Prayer involves action and devotion.

While verses 25-34 seem to say, “Don’t worry, be happy!” and appear to offer a kind of fairy-tale ethic, the extreme disentanglement recommended by them, of living without concern and instead utterly relying upon God, makes sense as another punctuated interpretation of the prayer in verses 9-13. “But strive first for the kingdom of God and his righteousness, and all these things will be given to you as well” sounds a heckuva lot like “Your kingdom come. Your will be done.” The more such prayer is cherished, the less believable it is that strictly the work of our hands keeps us alive.

Thus, it’s easy to see connection to the Psalmist who writes, “Some take pride in chariots, and some in horses, but our pride is in the name of the Lord our God” (Psalm 20:7).” Or, as the New Zealand pop singer Lorde once put in her 2013 breakout single, “Royals” —

“That kind of lux just ain’t for us. We crave a different kind of buzz.”

But if we go with the attribution to David for the sake of argument and with all due respect to a very talented commercial artist, even those quips come from the privileged. And that is often how the reliance upon God that Matthew presents comes off as challenging. It’s hard to conceive of what it really means to dispossess and trust God for livelihood when our lives have rarely had to access that kind of absolute dependence upon God. Even in a city like New York, some homeless need not necessarily call upon the Lord. They have cell phones.

But the key is to take our place of privilege as preachers and push our theological insights further into hard realities. At the end of Matthew 4 and beginning of Matthew 5, which preface the teachings of Jesus in Matthew 6, Jesus appears to be somewhere in Galilee. At the time of my writing, just south of there, the Dead Sea has flooded, washing away a bus, killing 19 students and teachers. Further southeast, Saudi Arabia has savaged Yemen in war, leaving many Yemeni on the verge of starvation and economic collapse even though food lines the shelves of grocery stores.

How can preachers name that kind of pain and convince parishioners that faith also entails putting prayers of daily bread into action? It will entail helping hearers resist the temptation of pious language without content. It will involve convincing hearers that the salvation of God’s people everywhere is as valuable as deeply held treasures, like property or a retirement fund. It will mean declaring that we can trust the instructions of God for our shared livelihood given by God, and especially for neighbors and strangers in places where mercy seems utterly remote.

Extravagant God, you have promised treasure in heaven that outweighs any we could envision or imagine on earth. Help us to be grateful for the amazing gifts you have already given to us. We pray these things in the name of Jesus Christ, our Savior and Lord. Amen.

Be thou my vision Bob Chilcott

Assistant Professor of Worship and Preaching

“For where your treasure is, there your heart will be also” (Matthew 6:21).
Print All Text Print All Commentary