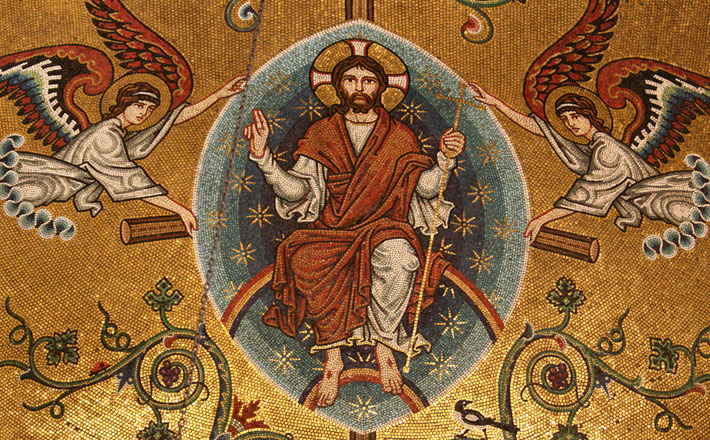 Whereas the Synoptic parable of the vineyard is a story of violence and greed (Mark 12:1-12), this image of the vine is one of fruitfulness, intimacy, and love.

This text is actually the first half of a larger unit, the second half of which appears in the lectionary next week. And that larger passage is best read as part of an even larger section extending to John 16:4a, as becomes clearer after study of the love passage (John 15:9-17) next week.

This week’s text divides into two halves with the repetition of Jesus’ “I am” at John 15:5. Although the sound bite perhaps most associated with the passage is “I am the vine, you are the branches,” that actually introduces the second half of the passage. The text as a whole begins instead with the vine and the vine-grower God. The word for vine grower is translated tenant in the Synoptic parable, where the absentee landlord sends his son to the tenants after earlier emissaries are beaten and killed, and the son is finally killed as well. Here in John, the Father himself tends the Son-vine, pruning the branches for abundant fruitfulness. Grapevines do need pruning; grapes need sun but not too much. So in this image the Father does that precision tending for the perfect balance of light and shade.

The words for prune and remove in John 15:2 and clean in v. 3 (the phrase translated “You have already been cleansed” in the NRSV is literally “You are already clean”) involve two plays on words. First, prune has the same root verb as remove, with a prefix added to it. Then the adjective clean (translated cleansed) is a cognate of the verb used for prune/cleanse. That adjective, clean, also appears in John 13:10-11. The work of the gardener-God continues the Son’s cleansing work of love.

The overwhelming thrust of the passage is fruitfulness. The words bear fruit appear six times in these eight verses. Fruit-bearing is not something that the branches do by force of will. The fruit happens organically because the vine is true and the gardener good. But the branches of this passage do choose to abide.

The verb abide like the phrase bear fruit appears over and over — eight times in four verses here — and will be repeated in part two of the passage next week when we learn that abiding in Jesus means abiding in Jesus’ love.

Abiding is important in John, where love of God means mutual indwelling. The verb abide has a cognate; and this noun appears in one of John’s most famous verses, 14:2. The many mansions in the Father’s house (in the familiar KJV) are actually abiding places. As Jesus’ own have places prepared for them in God, so also the Son and Father will have abiding places in Jesus’ own (14:23). And the Holy Spirit will also abide in them (14:17). So the vine image is another way of talking about abiding places (places where one is deeply at home), and both the vine and the abiding places are ways of talking about love.

Abide is one of the two imperatives of the passage. The branches have to abide because without the vine, they are fruitless; they can do nothing. And if they do abide and Jesus’ words abide in them, then comes the imperative ask. (This invitation and promise will be repeated in John 15:16 next week.) There can be little doubt that what the branches will ask for will be shaped by the one who tends them; they will surely ask for the fruitfulness for which they have been pruned.

We also find in the passage two references to the fruitlessness of not abiding. It isn’t as if there are options. If you want the fruit of this vine, this is where you get it, by abiding here. But just as there is no fruitfulness in not abiding, so there is no real future in focusing on those fruitless branches. In the first place, we’re all just branches ourselves, not vines, and certainly not in charge of the vine. We don’t even make ourselves fruitful. We cannot possibly discern what is happening with the rest of the vine. For all we know, what looks like removal is actually pruning for abundant fruitfulness (the two verbs, we remember, are only separated by a prefix). But whatever is going on with the other branches is in any case the work of the vine grower. In John our sole responsibility to the rest of the branches is love.

It is perhaps also worth keeping in mind that branches don’t live off their own fruit. The fruit is for someone else, which feeds into our interpretation of love in the passage next week.

For now, this passage, which began with the vine tended by the vine-growing Father, comes to a close with the fruitful branches glorifying the one who has made them that way, and here we learn that another way to talk about this fruitfulness is discipleship, and so discipleship is also a gift.

A Presbyterian may be reminded of the best-known answer in the Westminster catechism: “Man’s chief end is to glorify God and enjoy him forever.” But anyone can see that it is finally a passage about grace.

We bear fruit not by squeezing it out of ourselves but because we are extensions of the vine, pruned by the gardener-God who wants us to be fruitful and to be drawn into the unity of the Father and Son. God’s love, presence, and pruning are gifts. But we do choose the abiding place of our soul. If we want to bear Jesus’ fruit, then we choose to abide in him, which we will learn in John 15:9 means to abide in his love.

Anne Lamott has famously said, “Hope begins in the dark, the stubborn hope that if you just show up and try to do the right thing, the dawn will come. You wait and watch and work: you don’t give up.”

It all begins with God’s love. In case we ever forget this basic, essential fact of our faith, 1 John makes it crystal clear.
Print All Text Print All Commentary

The Risky Business of Bearing Fruit