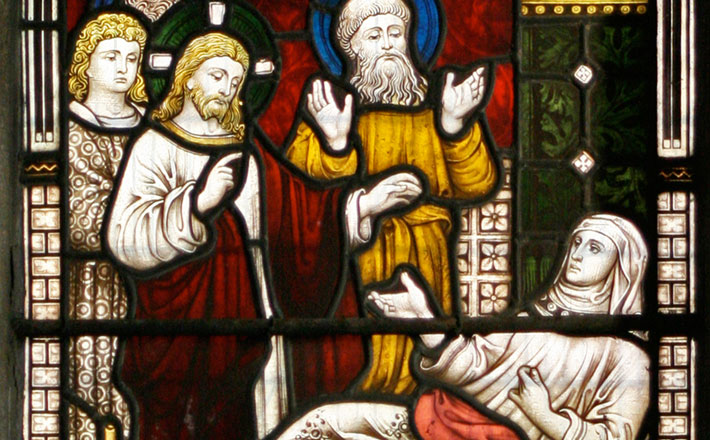 There is no doubt that it is also part of a larger composition that is at least as extensive as the chapter. However, the lectionary verses also form a discrete subsection that follows the idol polemic of vv. 18-20.

The chapter opened with orders to proclaim the good news of the Lord (Isiah 40:3-5, 9), but v. 21 starts over with forceful rhetorical questions (“Have you not known? Have you not heard?”) that call into question whether the proclamation has been received. The theme of knowing and hearing runs through the entire book of Isaiah (1:3; 5:19; 6:9; 48:6-8, etc.), and this text assumes, like many others, that its hearers will struggle to comprehend its message.

Even a brief consideration of the state of the hearers makes clear why this good news would have been difficult to process. It is widely recognized that Isaiah 40 and following speaks to a different historical situation than chapters 1-39. It comes in the wake of the Babylonian exile, perhaps around the end of the exile, in the 530s BCE. It may be that different Judeans experienced exile differently — there were probably various groups in various places. Some, like those who were with the former king Jehoiachin in Babylon itself seem to have received rations from the royal court and may have eventually been treated reasonably well (2 Kings 25:27-30).1 Others, however, may have been located in what were essentially labor camps. Even in the best case, the homecoming and restoration in Judah would have been a very difficult mater, however. The land had been devastated and not rebuilt. Thus, although the return from exile is often imagined as joyous (e.g., Psalm 137:6), Nehemiah 11:1-2 reports that there was no crush of people begging to live in the destroyed city of Jerusalem. It was without a temple or effective walls; the comforts and protections that a city would normally have afforded in the ancient world were missing. In fact, the people had to cast lots to see who would live there, and they “blessed all those who willingly offered to live in Jerusalem.” After fifty or more years in exile, most of those returning would have hardly known the place. Exile was hard, but returning was difficult, too.

God intervenes in this situation, not unlike his intervention at the Exodus (to which this return is compared in Isaiah 51:9–11). In a part of the world that had seen, over the preceding century, a succession of increasingly powerful emperors (Assyrian, Babylonian, and Persian), the prophet assert the incomparability of the rule of Israel’s God. Isaiah 40’s particular assertions of divine power are reminiscent of Job — particularly the references to the foundations (Job 38:4) and circle (Job 22:14) of the earth, and the stretching out of the heavens (Job 9:8). Certain shared Hebrew vocabulary could even suggest a literary relationship between Isaiah and Job. But unlike in Job, where the assertions of God’s superiority serve to crush the challenge to divine justice, here they uplift and heal: The Lord is the creator and kingmaker, but he shares his inexhaustible power with anyone who waits on him. Isaiah 40 bends the theme of God’s transcendence back toward immanence — they allow the hearer to understand the significance of God’s incomparable power for them. The Lord “does not faint or grow weary,” and “he gives power to the faint, and strengthens the powerless.”

One might perceive in the comforts of the final verses a special message for those for whom the long journey home would be hardest: the elderly. They were the only Judeans who would remember Judah by the end of the exile. The writer contrasts between those who rely on the Lord — who will “run and not be weary … walk and not faint” — with boys and men in their youthful prime, who will “faint” and “fall exhausted.” This message would not have been of much help to young men, but it was perhaps not aimed primarily at them. Ezra 3:12-13 recounts that when the foundations of the Second Temple were laid, “many old people, who had seen the first temple on its foundations, wept with a loud voice when they saw this temple, though many shouted aloud for joy, so that the people could not distinguish the sound of the joyful shout from the sound of the people’s weeping.” The memories of the elderly were not merely nostalgia; they would have been useful to the returnees. Life in Mesopotamia would have been different, and so remembering how and where things had been done in Judah would have been a significant contribution. The cadence of the passages sequences of imperfect verbs — they shall renew, they shall rise, they shall run, they shall walk — seems meant to carry them along.

The closing metaphor, “they shall rise up with wings like eagles” is the poetic pinnacle of the passage, and evokes the Exodus again (see Exodus 19:4: “You have seen what I did to the Egyptians, and how I bore you on eagles’ wings and brought you to myself”; also Deuteronomy 32:11). The biblical witness is that from age to age, God hears the cries of his people and empowers them — in exhaustion, in oppression, and in other moments of greatest need. In some ways, this Isaianic poetry goes beyond the Exodus accounts, in that God not only protects the people with his wings, he bestows on them wings of their own. Since wings are frequently described as a supernatural attribute (Psalm 17:8; Isaiah 6:2; 31:5; Jeremiah 48:40; Ezekiel 1:6ff., Malachi 4:2, etc.), they indicate an unusual gift of divine power. This exceptional poem appropriately marks one of the most significant events in the history of God and His people.

1 A Neo-Babylonian ration list records fairly large quantities of oil given to the king of Judah and some of his subordinates: http://www.livius.org/ne-nn/nebuchadnezzar/anet308.html