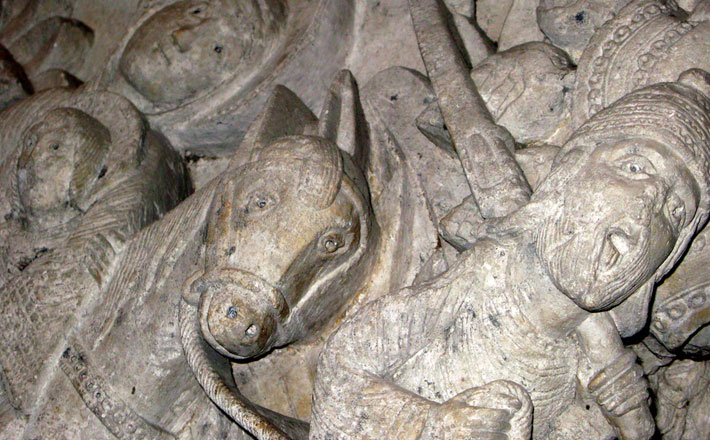 Within the luminous Book of Consolation (Jeremiah 30-31), the reader is astonished to find the matriarch utterly inconsolable because her children are no more. A unique figuration in the Latter Prophets, Rachel here refracts the trauma of a people broken by the tragic losses of colonization and exile. The weeping matriarch shows us that hope cannot be claimed easily after the experience of violence — not even by a covenant community called to be blessing for the whole world (Genesis 12:1-3). In this oracle, Jeremiah makes terrible loss, agonized waiting, and tenuous hope visible in a single holy utterance.

Who was Rachel, in the imagination of ancient Israel? Beloved of Jacob, Rachel showed herself to be resilient and creative. After Jacob’s household left the exploitative Laban, Rachel was bold in her ruse to hide purloined household idols from her outraged father (Genesis 31), proving her mettle as companion to her trickster husband. Struggling for years with barrenness, embittered by sororal competition for social status, Rachel did not give up, finally claiming her place in an androcentric cultural system through her birthing of Joseph and Benjamin. Rachel died in childbirth (Genesis 35:16-20), so in Israel’s historical imagination she could never have grieved the loss of her actual offspring. Thus the image in Jeremiah 31 is transhistorical and iconic: Rachel has become the paradigmatic mother who mourns ceaselessly over the fallen of Israel.

Jeremiah 31:15-17 opens with a series of enigmatic poetic clauses. “A voice is heard in Ramah”: whose voice? We cannot yet know; the poetry draws us in. Why Ramah? While the Hebrew term could signify an elevated place (“A voice is heard on a height”), it is more likely a place-name signifying an old Benjaminite cult site north of Jerusalem. It may evoke the Ramah where the great warrior-judge Samuel had been buried (1 Samuel 25:1, 28:3), and it was near the traditional site of Rachel’s tomb, also in Benjaminite territory (1 Samuel 10:2, although see Genesis 35:19; the location of her tomb has been contested since ancient times). The motif of the weeping Rachel may reflect an ancient folklore tradition that the ghost of Rachel haunted her burial place, although that cannot now be proved.

Jeremiah’s use of Ramah draws on a venerable cultural memory about Rachel, but it also relates to the prophet’s political circumstances. In Jeremiah 40:1, Ramah is identified as a way station during the forced deportation of Judean captives to Babylon. The mysterious opening of Jeremiah 31:15 creates a productive collision between Judah’s impressive past — the era of the patriarchs and matriarchs; the time of Israel’s most powerful judge, Samuel — and the loss, fear, and shame experienced by the traumatized deportees. Evoking authoritative tradition at such a challenging time would surely have catalyzed resistance and hope for the implied audience reflecting — then or later — on the exile.

The next clause, nehî bechî tamrûrîm, begins with two words whose brevity, medial guttural consonants, and assonance may evoke the gasps of sobbing. These words are followed by a syntactically more elaborate modifier (“bitter”) that draws out long vowels (u and i) in a wail. The sound of weeping precedes the identification of the one who is lamenting, which finally comes: it is Rachel, weeping for her children. The intensification enacted by the Hebrew parallelism with the next clause draws us deeper into her grief: refusing to be consoled for her children. Why? The poetry signals the cause in a shocking way: utter absence, expressed as the particle of negation with pronoun (‘ênennû), a formulation so anomalous in its terseness that some scholars emend it. The meaning is clear: They are not.

But there is hope. A reversal is effected through use of the Hebrew particle that predicates existence (yesh) — semantic converse of the particle of negation — as the Lord speaks to Rachel’s grief, bidding her to refrain from mourning. First, there is (yesh) a reward or wages for her work. What would be Rachel’s work? Over the centuries, various interpretations have been proposed, among them her original “work” of mothering children and her sustained liturgical “work” of lamentation in the allegory. Rachel’s work may have been to keep watch in her terrible grief, insisting on fierce dissent from any and all platitudes designed to erase her loss, until the Lord finally yielded and brought home the lost. Death and diaspora may have seemed to obliterate Judah’s children, but they will return. The second iteration of promise with yesh is bolder: there is hope for her future, for children will return to their inherited territory. The desolating ‘ên of negation has been spoken and can never be unheard — not in this oracle, not in the history of Israel’s subjugation by Egypt, Assyria, and Babylon. But it can become part of a new discourse of divine redemption. This word of hope may be fragile, buried as it is at the center of the dark and disputatious book of Jeremiah. But it is nevertheless a promise of God.

The image of the weeping Rachel is deployed in Matthew 2 as a prophecy fulfilled by Herod’s slaughter of innocents in Bethlehem. In the shadow of the Cross, we understand the Incarnation as a sign of hope clothed in vulnerability, conflict, and suffering. The Gospel shout is rooted in joy, to be sure! But to be meaningful, it must reflect an understanding of the loss, fear, and pain at the core of human existence. Where believers grieve, Rachel stands ready to lament with them. Without such prophetic solidarity, we might be tempted to use theology to “solve” the suffering of the world for which Christ died. No: only in naming what has riven us and our communities can we proclaim with integrity the restoration that God offers in Christ. The preached word, then, becomes not a theological platitude but a word of power spoken into that liminal moment in which agony is true and hope is true.

Some churches today might opt for the Luke 2:22-40 story about Simeon and Anna’s joy over the dedication of Jesus.

The Psalms of December’s lectionary: three National Laments — and now, the Sunday after Christmas? A National Thanksgiving! How fitting.

In the United States, the American Dream is often proclaimed as if it were gospel: anyone who works hard and makes good choices can be happy and successful.
Print All Text Print All Commentary