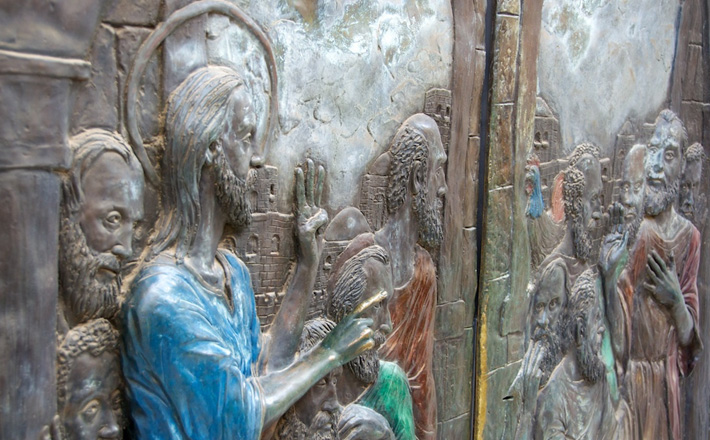 This long and multifaceted reading depicts God and human beings at cross purposes. The various characters in the narrative provide a vivid portrait of human sinfulness and its consequences. Judas, motivated perhaps by greed, betrays Jesus but then bitterly regrets his action. The disciples, with Peter at the head, long to demonstrate their faithfulness and love but fail miserably. Jesus’ opponents — the religious leaders, Pilate, the Roman soldiers, and the crowds — all in their own ways reject, torment, and ridicule Jesus as they seek their own benefit and their own ends. Jesus alone remains fully obedient to God’s will, opening the way for God to defeat humanity’s death-dealing choices through the paradoxical power of the cross.

The story opens with Judas making an arrangement to hand Jesus over to the religious leaders in exchange for 30 pieces of silver and begins to look for an opportunity (Greek efkairía, “good time, favorable occasion”) to betray him. Just two verses later, Jesus tells his disciples, “My time is near.” At the right time, God will make use of Judas’ timely moment to achieve God’s own purposes.

Judas’ story unfolds in four scenes: the arrangement with the chief priests, Judas’ interactions with Jesus at the last supper, the act of betrayal, and Judas’ repentance. Throughout the story he is described, not from the narrator’s perspective much later in history, “as the one who betrayed Jesus,” but with a present participle, “as the one who was in the process of betraying Jesus.” The choice of tense heightens the dramatic intensity of the dinner conversation — suggesting that Jesus’ betrayer might still have the opportunity to make a different decision.

When Jesus predicts that one of the disciples will hand him over, all except Judas respond, “Surely not I, Lord!” The betrayer’s response — “Surely not I, rabbi!” — reveals what sets him apart from the others. Judas sees Jesus as a teacher whose words, though instructive, are not necessarily authoritative. The other disciples all view Jesus as their Lord who is not merely to be heard, but obeyed. Strikingly, even though Judas does not acknowledge Jesus’ lordship, Jesus continues to include him in the group of his disciples, offering him communion with all the rest. With Peter and the other disciples, Judas eats Jesus’ body and drinks Jesus’ blood of the covenant, “poured out for the forgiveness of sins.”

In the next scene, despite having shared in Jesus’ body and blood, Judas continues down the fateful path toward betrayal. At some unspecified point, he leaves the other disciples and then returns with a mob to identify Jesus for the religious leaders and their emissaries, who evidently did not know Jesus by sight. The grace that Jesus offers Judas extends even to the moment of betrayal, when Jesus includes Judas among his own, addressing him as “friend.”

In Judas’ final scene, with his decision irrevocably made, he sees the consequences of his choice. The religious leaders hand Jesus over to Pilate, and Judas realizes that Jesus will be condemned to death. Matthew portrays Judas as repenting for his actions. He confesses his guilt, saying, “I have sinned by betraying innocent blood”; he returns the profit from his crime; and he follows his verbal and financial repentance with the only act that, in an honor-shame society, could atone for his dishonorable betrayal of a friend’s life: he kills himself. Jesus’ blood lends a deep ambiguity to the story. Judas is indeed guilty of innocent blood. But that same blood is poured out for forgiveness, and he repented as fully and freely as he knew how. Does God’s mercy extend to Judas?

Judas is far from the only sinner in the story. Just as Jesus prophesies that one of his own will betray him, so he prophesies that one of his own will deny him, and that at the critical moment all of his own will stumble and scatter. Though Peter, as usual, takes the lead role, the other disciples all affirm their absolute loyalty and dedication to Jesus and echo Peter’s claim that even if it costs them their lives they would never deny Jesus. The scene in Gethsemane reveals how empty their promises are.

The inner circle of Peter, James, and John, despite Jesus’ direct command to stay awake with him, promptly fall asleep. When Jesus first returns from his anguished prayer he focuses his speech on Peter, but his words (in the second person plural) are addressed to them all. Even as he orders them to watch and pray so that they are not overcome by temptation, he names both their desire to obey and their inability to do what he commands: “the spirit is willing, but the flesh is weak.”

Jesus’ prayer that his Father’s will be done highlights both his own obedience and his disciples’ disobedience, for while he prays, sleep overcomes them once more. When the arresting crowd arrives, one of the disciples disobeys Jesus yet again by resisting evil with violence, in direct contradiction to his teaching in the Sermon on the Mount (Matthew 5:38). After Jesus rebukes him for resorting to the sword, all of his followers forsake him. The cross is more than they can bear.

During Jesus’ trial, Peter once again exemplifies the disciples’ longing and failure to follow Jesus. He observes events from a distance, but overwhelmed by fear, he thrice denies knowing Jesus. At the moment of denial, he not only abandons his Lord but disobeys his teaching in Matthew 5:33–37 by using oaths to swear that he does not even know Jesus. When the cock crows, Peter realizes the truth of Jesus’ prophecy and the depth of his own lies. Though he weeps bitterly, he cannot undo what he has done. Does God’s mercy extend to Peter?

If the disciples deny, disobey, and flee because of fear and Judas betrays because of greed, the council of religious leaders and Pilate especially show us other facets of human sinfulness. Jesus’ trial reveals the death-dealing machinery of the state, aided and abetted by religious leaders more interested in securing political power than in serving God. In the hands of both the religious and the civil authorities, truth becomes malleable, a tool shaped by false witnesses and selective evidence to benefit the powerful and achieve a desired end. Though the witnesses’ testimonies do not agree, the religious council persists until they find an excuse to denounce Jesus as deserving death and hand him over to the Roman state apparatus for sentencing.

Pilate, recognizing a political mess when he sees it, does his best to evade responsibility for a decision that he knows to be unjust. When the crowd, spurred on by their envious leaders and eager for a spectacle, chooses life for Jesus Barabbas (whose names means “son of the father”) and death for Jesus Christ, the Son of God, Pilate readily capitulates to their will. If political stability requires the death of an innocent man, then so be it. What can he do except wash his hands of the whole business and hope that so much innocent blood does not leave a stain? The crowd, on the other hand, uses a traditional and chilling phrase to accept full responsibility for their decision: “His blood be on us and on our children.”

The blood imagery throughout the passion narrative invites careful interpretation and reflection. On the one hand, the repeated references to blood in Matthew 27:4, 6-7, 24, and 25 recall Jeremiah’s prophecy that the temple and the city of Jerusalem would be destroyed because the city was filled with the blood of the innocent (Jeremiah 19:3-8; 22:3-5; compare to 7:5-7; 26:13-15). Given that Jesus echoed Jeremiah’s temple sermon when he cleansed the temple, and that the witnesses at Jesus’ trial testified that he had said he would tear down the temple, it seems clear that Matthew understands the Romans’ destruction of Jerusalem and the temple as an act of divine judgment.

Yet once again Jesus’ own interpretation of his blood at the Last Supper invites us to hear a deeper meaning in the crowd’s words. So many taunts and phrases in the passion story are profoundly ironic. Do the people understand what they are saying? They ask that Jesus’ blood be upon them and upon their children. But Jesus says that his blood is poured out for forgiveness (the blood of the sin offering, Leviticus 4:25, 34; 5:9). Does God’s mercy extend to those who condemned and executed Jesus?

At the center of the narrative, in stark contrast to his sinful disciples and opponents, is Jesus the obedient Son of God who continues to resist temptation just as he did after his baptism. Though he could have escaped arrest, he refuses to be rescued by angels (Matthew 27:53; 4:5–6). The devil promised him the kingdoms of the world and their glory if only he would bow down and worship, but the Messiah, the King of Israel, chooses instead to endure the soldiers’ mocking adulation and the ridicule of the passersby.

The Son of God saves others by not saving himself. Rather than seeking divine status or grasping at royal power, Jesus accepts the death penalty and is executed as one common criminal among others. The Son of Man identifies with every person who has ever felt God’s absence at the moment of deepest need. He dies in agony, alone.

At the moment of Jesus’ death, creation convulses and boundaries break: the temple curtain is torn in two, the earth shakes, the rocks split, and the tombs are opened. The passion narrative in Matthew ends with Jesus buried and his tomb under heavy guard, but the evangelist has already given away the ending by saying that the dead came out of their tombs after Jesus’ resurrection.

The old order comes apart for the Son of God, by his unique obedience to God’s will, has opened the way to a new creation for all God’s children. Here indeed we see God’s cross purposes. Humanity has done its worst, but what humans intended for evil, God intended for good (Genesis 50:20). The way of the cross is none other than the way of life and peace.