The text begins abruptly, about half way through chapter 4 of Romans. 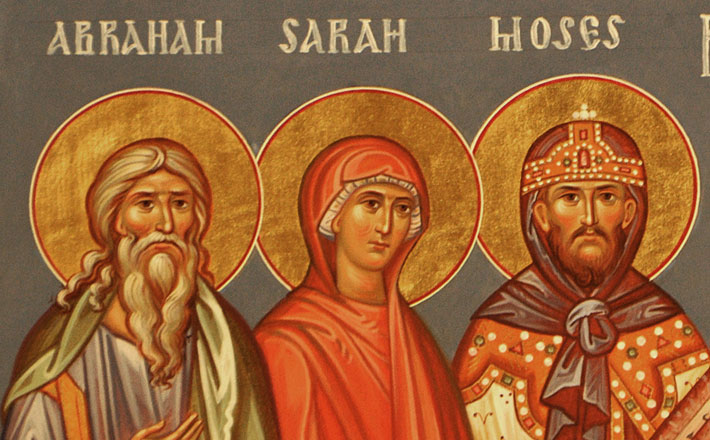 The text begins abruptly, about half way through chapter 4 of Romans.

Since the chapter carries on a discussion running throughout its twenty-five verses, the reader and listener are caught off guard. Starting at 4:13 is like walking into a room where an intense and detailed conversation has been going on for some time. Consequently, a consideration of its context in Romans is important.

Chapter 4 continues what has been said in 3:21-31, in which Paul (1) sets forth the gospel of justification by faith apart from works of the law and (2) maintains that, since that is so, no one can boast about being able to obtain justification by works of the law, and that applies to both Jew and Gentile believers. Then in chapter 4 itself Paul takes up the story of Abraham as a proof that justification is by faith, not works. After all, he says, the great patriarch Abraham was justified by faith, not by observing works of the law. He was justified while he was technically still a Gentile, since he was declared justified (Genesis 15:6) prior to being circumcised (Genesis 17:10-27). Moreover, the law of Moses was not given until many years (centuries, in fact) after Abraham was declared righteous, so he could not have been justified by doing works of the law.

By the time the text from Romans 4:13-25 is read, the congregation will already have heard something of Abraham in the First Lesson (Genesis 17:1-7, 15-16). There the Lord appears to Abram, changes his name from Abram (“Exalted Father”) to Abraham (“Father of a Multitude”), and promises that he will be the “father of a multitude of nations.” That promise, unilateral in its utterance and everlasting in its duration (Genesis 17:7), becomes the portion of the Abrahamic covenant that is of interest to the apostle Paul as the chapter in Romans unfolds.

First though, in Romans 4:13-15 Paul picks up an even earlier part of the story of Abraham, which is in Genesis 12:7. At that point God promises the land of Canaan to Abram’s descendants; Paul modifies the story to say that God promised Abraham that he and his descendants would “inherit the world.” Paul takes liberty here, since the bundle of promises given to Abraham consist not only of land, but also posterity and a great name (Genesis 12:2-7). Clearly, Paul is not interested in cataloguing the gifts to be given; his interest is in how the promise came to Abraham and his descendants. The plain fact is that the law had not yet been given. Abraham received the promises “through the righteousness by faith,” not “through the law” (Romans 4:13). Paul could have simply written “through faith” but he wrote “through the righteousness of faith.” In other words, the very faith that justifies (or confers righteousness) was already operative in the case of Abraham, who accepted the divine promises by faith and was therefore declared righteous.

In Romans 4:16-22 we have Paul’s version of a portion of the career of Abraham. It could be called the spiritual biography of the patriarch, relating Abraham’s struggles of faith and their ultimate resolution. But of course that is not biography for biography’s sake. It is for the readers to hear as something that relates to them, as made clear in the last three verses of the paragraph (4:23-25), which will be taken up below.

The promise to Abraham, Paul declares, was and is valid to both “the adherents of the law” and “the adherents of the faith of Abraham” (NRSV: “those who share the faith of Abraham”). The first group are Jews (not Jewish Christians), and it becomes clear as the paragraph unfolds that the second group are those who believe in Christ, whether Jewish or Gentile. That is so because God promised to Abraham that he would be “the father of many nations” (not just Israel). The promise seemed impossible, given the age of Abraham and Sarah. But God “gives life to the dead and calls into existence the things that do not exist” (Romans 4:17). Here is a subtle allusion to the resurrection of Jesus from the dead. But sticking with the story of Abraham, Paul describes the patriarch as having faith in the promises of God who can indeed bring life to the dead. Abraham was about a hundred years old, and Sarah was beyond child-bearing age; they were both as good as dead when it comes to having children. Nevertheless, Abraham believed the promise, and “his faith was reckoned to him as righteousness” (4:22). Righteousness in the biblical sense often has to do with right relationships. Abraham was rightly related to God through his faith, and so he was considered by God as righteous.

The result of this discussion is that those who believe in the resurrected Christ are heirs of the promises to Abraham; they belong to the elect people of God.

The final verse (Romans 4:25) appears to be a creedal statement. Jesus was handed over to death for our trespasses; he was raised for our justification. The death was atoning; he bore our sins, so that we are free of them. His resurrection, by the power of God, certifies that the atoning death was indeed effective; our faith in it is the means of our justification (being considered righteous).

Like so much in the letters of Paul, this passage is difficult to follow. It is filled with biblical allusions concerning the law of Moses, Abraham, and the promise given to him; and it contains the theological concept of righteousness. Yet it is a powerful passage, and it speaks eloquently to Christian faith. It prods the preacher to do a bit of Bible history and to make an important connection between the congregation and the biblical story. Abraham is considered the patriarch, the great ancestor, of the Jewish people. But according to what Paul writes, and based on how he interprets what is said in Genesis, Abraham is also the ancestor of all Christian believers as well. That is by spiritual, not physical, descent.

Is that important? It most certainly is. The beginnings of the Christian community are not to be found in sources outside the Bible, even though many sources outside the Bible have contributed to Christian theological and institutional developments over time. The community’s history reaches far back into the biblical story, beginning with Abraham. All that is included in the Old Testament is part of the Christian heritage. And the identity of the church is shaped by the biblical story. The church consists of a people called into being by God for communion with Christ and his followers and for the sake of the world. It does not replace the Jewish people as the people of God, but it is a larger community incorporated into that people. To be sure, it has an identity of its own apart from the Jewish community, but it coincides with the people of Israel in witness. It carries out the purpose of God to create a distinctive community of witness to proclaim the prophetic and evangelical messages coming out of the Scriptures.

But there is more to this passage for the preacher, particularly during the Season of Lent. The heart of what is said in Romans 3:21-4:25 (in which 4:13-25 has a major role) is that God has done something for us that we cannot do for ourselves. That is encapsulated in 4:25. God sent his Son to bear our sins, and through trust in the gospel, we have justification; that is to say, we are in a right relationship with God. We journey on in Lent with the cross in view, the means of our being set aright, purely by grace.