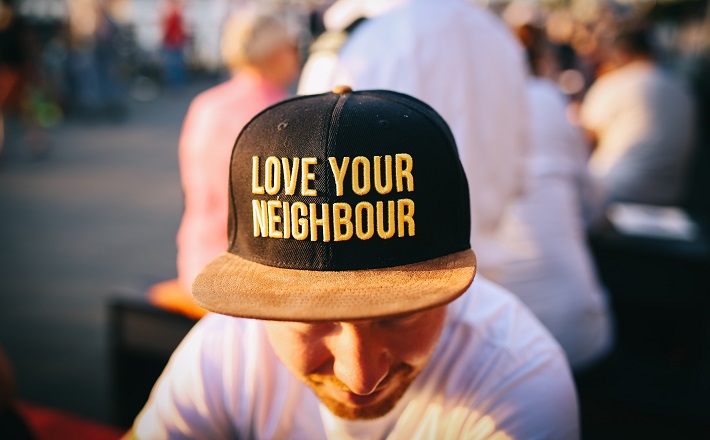 "The second is this, 'You shall love your neighbor as yourself.'"Photo by Nina Strehl on Unsplash; licensed under CC0.
November 4, 2018

To be sure, it contains many uplifting themes, such as loyalty and companionship, as well as an overall movement from emptiness and death to fullness and life. Nevertheless, its feel-good ending is preceded by an edginess that can be tempting for readers and preachers alike to gloss over. The first chapter in particular, which is appointed in its entirety for this week’s Old Testament reading, emphasizes the precariousness of Ruth and Naomi’s situation. To proclaim the remarkable hope in this story, a preacher must first reckon with the significant despair that frames the narrative.

The back-to-back readings from Ruth this Sunday and next provide an opportunity for preachers to dwell in this story a little longer than usual, essentially presenting a mini-series on Ruth that can take into account some of the narrative’s finer details. In this week’s commentary on Ruth 1:1-18, I highlight the intersecting hardships that face Ruth and Naomi as they travel to Judah together. In next week’s commentary on Ruth 3:1-5 and 4:13-17, I will focus on the happy resolution of the story and reflect on its theological implications.

A central theme in the book of Ruth is the family’s migration: their movement from Judah to Moab, then back again.1 The journey is driven by hunger. Ironically, they must leave Bethlehem, which in Hebrew means “house of bread,” to find sustenance in Moab, a land whose people are reviled elsewhere in the Old Testament (see Genesis 19:30-38 and Deuteronomy 23:3-6).

The Bible contains many stories of famine prompting families to seek food in other lands, a choice that is fraught with danger. Abram and Sarai, for example, leave Canaan to sojourn in Egypt, where Sarai is abducted into Pharaoh’s house (Genesis 12:1-20). Like other families who, even today, leave desperate situations in their homelands for the promise of a new place, Elimelech and Naomi must have thought the specter of starvation at home outweighed the significant perils of the journey. Likewise, Naomi, having lost her husband and her sons, decides that her prospects for both food and belonging back home in Judah are enough to risk making the trip again.

Ruth is a story centered on the lives and experiences of women, something that is relatively difficult to come by in the Old Testament, (many of my beginning Hebrew students notice this when reading Ruth for the first time, as it is full of otherwise rare feminine verb forms and pronominal suffixes!). That emphasis draws attention to the particular kinds of difficulties faced in the story by women, and especially by widows.

When Naomi entreats Orpah and Ruth to return their “mother’s house” — another unusually female-centric term, given that the Bible usually prefers “father’s house” — she focuses on the importance of their finding husbands, so that they may have security (Ruth 1:8-13). The word menuchah (verse 9), translated in the NRSV as “security,” has the sense of a “settled rest” or being “at home;” for these single women in the ancient Near East, their best hope for long-term safety and prosperity is to find new husbands as soon as possible.

Readers can also glimpse the everyday dangers faced by women in the barley fields when Ruth goes to glean behind Boaz’s reapers. Boaz tells Ruth, “I have ordered the young men not to bother (Hebrew nag‘ek, “touch”) you” (Ruth 2:9). The implication of his remark is that the other workers may have harassed or otherwise harmed the woman without Boaz’s warning. Alone, in need of food, and without a family or other formal support system in Judah, Ruth faces real physical danger.

Ruth’s Moabite ethnicity also puts her at risk. She is surprised when Boaz offers her special treatment in the field, saying to him, “Why have I found favor in your sight, that you should take notice of me, when I am a foreigner?” (Ruth 2:10) There are many places in the Hebrew Bible that show suspicion or even hostility toward “foreign women.”

The danger of foreign women is a recurring theme in the Deuteronomistic History (Joshua-2 Kings), because they are thought to sway their husbands toward foreign gods (for an example of this polemic with regard to Solomon, see 1 Kings 11:1-13). In Ezra-Nehemiah, men are made to expel their foreign wives from the post-exilic returnee community (Ezra 10). Ruth’s own foreignness looms particularly large in her story; in fact, the text takes great pains to emphasize Ruth’s ethnicity for the ancient Israelite audience, repeatedly referring to her as “Ruth the Moabite” (see Ruth 1:22; 2:2, 21; 4:5, 10), rather than simply “Ruth.”

Of course, Naomi herself has also sojourned as a “stranger in a strange land” (see Exodus 2:22 KJV), though the text provides us with no details on how Naomi was received as a Judahite woman in Moab. Ruth’s impassioned speech in verses 16-17 is often heard as a declaration of loyalty and compassion, a selfless willingness to accompany her aging mother-in-law. At the same time, it is possible that, from Naomi’s point of view, Ruth’s companionship would be more of a burden than a benefit.

After all, Ruth is a foreign woman from a reviled nation, and Naomi, widowed and vulnerable, is trying to re-enter Judahite life after having made a life among the Moabites. Would the people of Bethlehem welcome her back with Ruth in tow? Ruth’s response to Naomi certainly sounds like, “I’m completely devoted to you,” but it may also carry an undertone of, “You can’t get rid of me that easily!”

Ruth 1 mentions God several times, but God does not appear as a character in the book of Ruth in the same way God appears in some other biblical stories. That is, God does not speak directly with any of the characters, nor are God’s actions foregrounded with any detail. References to God and God’s actions are presented from the point-of-view of the characters, rather than the narrator. For example, Naomi hears that the LORD has given food to God’s people in Judah (1:6), and she later attributes the bitterness of her life to the hand of the LORD (1:13, 20, 21).

The one time the narrator directly attributes an action to God is when Ruth becomes pregnant at the end of the book (4:13). Both Naomi and Ruth use the name of God in vow formulas (such as, “May the LORD do thus and so to me…,” 1:17), but readers ought not to jump to conclusions about the characters’ piety from those invocations alone, just as Scarlett O’Hara’s vow that “as God is my witness, I will never go hungry again” does not necessarily indicate her abiding faithfulness. Instead, the God-language of Ruth paints a religious and cultural backdrop for the narrative, inviting readers to focus on the story’s human interactions and to draw their own conclusions about the presence of God within it.

There is no limit to the amount of work to be done in the church in correcting anti-Old Testament bias.

The lectionary reading for this week is the Shema, the core confession of faith in the Jewish tradition: “Hear, O Israel: The Lord is our God, the Lord alone” (or alternatively one could say “the Lord is one”).

The text of Hebrews is replete with comparisons.
Print All Text Print All Commentary

Discussion Questions for Ord. 31B