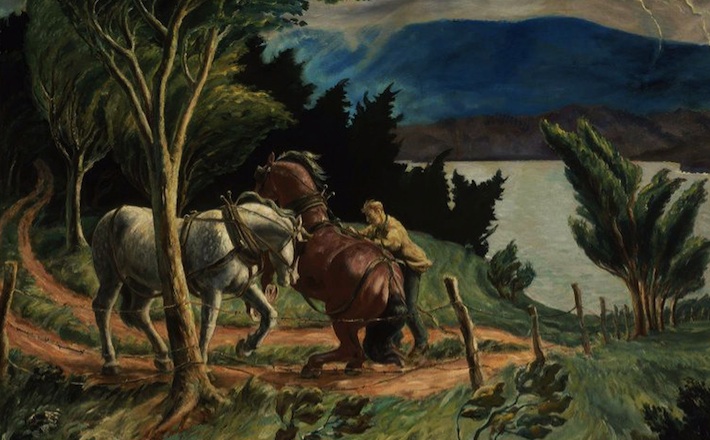 I suspect these verses are omitted because they repeat what Jesus had already said in previous week’s lectionary readings of 8:31 and 9:31 where Jesus predicts his suffering, death, and resurrection. From a simple story perspective, only one of these three predictions is necessary to confirm Jesus’ awareness of what was going to happen to him in Jerusalem. From a narrative perspective, however, the threefold pronouncements are a way of asserting its reliability and inevitability, and each one individually is important in providing a stark contrast to what precedes or follows it.

The first instance in 8:31 is sandwiched between Peter’s confession of Jesus as the Messiah and Peter’s rebuke of Jesus for announcing his death. The second in 9:31 is immediately followed by the disciples’ argument about who was the greatest. We are prepared, therefore to expect some contrasting misunderstanding following Jesus’ statement in 10:33f.

See, we are going up to Jerusalem, and the Son of Man will be handed over to the chief priests and the scribes, and they will condemn him to death; then they will hand him over to the Gentiles; they will mock him, and spit upon him, and flog him, and kill him; and after three days he will rise again.

This time, it is James and John who follow Jesus’ pronouncement with a request that shows how little they have learned. Instead of acknowledging Jesus’ anticipation of suffering and death, they imagine a triumphant, regal scene with themselves sitting in positions of honor and power at King Jesus’ right and left. It is not a matter of leaping to an expectation of the glory of the post-resurrection Jesus. (According to Mark 9:10, they do not understand what a “rising from the dead” means.) They simply have not heard Jesus at all — or refused to hear the dire news — even though he has repeated the prediction three times.

Jesus replies, doubtless with considerable exasperation, that they don’t have a clue what they are asking for. Can they drink the same “cup” of suffering and death he must drink, a cup that he himself will later ask be removed if possible? (14:36) Can they be baptized with the same baptism Jesus is to endure? (Beyond a metaphorical symbol for suffering, Jesus’ reference to a “baptism” is unclear. Perhaps Mark’s audience would understand it in the same way that Paul talks about being baptized into Christ Jesus’ death in Romans 6:3f.) Still clueless, James and John affirm that they can, but, surprisingly, Jesus says that they will. (By the time that Mark is written, James will have been killed by Herod Agrippa I in 44 C.E. for his role as a leader in the Jerusalem church. The fate of John is uncertain, though traditionally it was reported that he lived into old age in Ephesus.) Nonetheless, positions of honor are not Jesus’ to give. James and John may have been thinking of something along the lines of being with Jesus in glory like Moses and Elijah were at the Transfiguration (Mark 9:2-8), but in Mark, the only ones to be at Jesus’ left and right will be the bandits crucified with him when he is “enthroned” as “The King of the Jews.” (15:27)

Predictably, and rehashing the disciples’ dispute about greatness in 9:33-37, when the others hear what James and John did, they get angry. Jesus has to call them together and tries to describe how the dominion of God is different than the dominions of the world. He refers to those who are regarded as rulers in the pagan world of the Roman Empire. (The text specifically adds the “regarded as” modifier.) They “lord it over” their subjects, and the verb here uses the same root as is used to refer to the real “Lord.” Their great ones exercise authority as tyrants, an authority that stands in contrast to the edifying and restorative authority displayed by Jesus. (1:22, 27; 2:10)

Once again, Jesus tries to redefine what it means to be first and great. In 9:35 and 10:31 Jesus had said that to be first required being last and servant of all. In 9:36-37 and 10:13-16 he had demonstrated what this looks like in God’s dominion as he welcomed children. Here in 10:43-44 he repeats the concept. To be great is to be a servant (diakonos). That certainly challenges normal expectations, but even in antiquity, there was appreciation for rulers who provided public service. Jesus pushes matters to an extreme, however, when he goes on to say that to be first is to be a slave (doulos) of all. Slaves were at the bottom of the social ladder, and there was no honor or reward in working for others as a slave.

This concept is not simply a theoretical proposition, nor is it given as a command only to Jesus’ disciples. In 10:45 Jesus indicates what it means for himself. Like his disciples, he did not come to be served but to serve. But Jesus is more than an exemplary servant. He also came “to give his life as a ransom for many.” This phrase is important for thinking about how Jesus understood his ministry. It has often been read in comparison with the “servant” in Isaiah 53 and used to think of Jesus’ death in terms of a substitutionary atonement or as a guilt offering for the sins of the world. Perhaps, but there is nothing here about appeasing God or providing a sacrifice. Rather, it’s better to think of Jesus as one who takes the form of a slave himself and was obedient to the point of death on the cross (Philippians 2.6-8!) thereby providing the ransom that frees us who were slaves of this world and captive to death.

Bob Dylan was right. “You’re gonna have to serve somebody.” When Jesus gives his life as a ransom, he frees us not to become great as the world understands greatness, but to serve others as slaves of Christ. And that really is great for us!