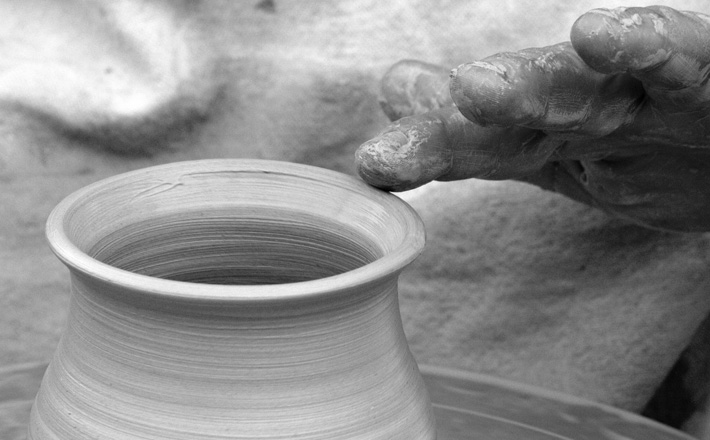 This familiar passage about “The Potter and the Clay” turns the idea of a loving God on its head. It is a vivid reminder that depending on human response, God is capable not only of intending good and evil toward humanity, but also of changing the divine mind about pending doom and blessings. One might read this passage and ask, “Where is the love?”

There are times when tough love is necessary to bring healing and reverse the effects of poor decisions, to reverse the effects of sin and evil in the world. Jeremiah’s prophecies of difficult times ahead and their fulfillment are a form of tough love. His foresight regarding arduous times ahead is a reflection of “the tension between temple theology (a theology in which bad things could not, would not happen to Israel because of the protection of God and the temple) and covenant theology (a theology of rewards for obedience and punishment for disobedience; similar to retribution theology).”[1]

For a nation that saw itself as God’s chosen people, nothing could be more upsetting than to think of the loss of God’s favor. R. E. Clements puts the matter succinctly, “Can it be thought that God would permit, let alone ordain, the destruction of Israel when they are ‘his’ people? The prophetic answer is that this can be so, as shown by the analogy of the potter beginning anew by reworking the original clay.”[2]

It is helpful to recall that Jeremiah’s ministry spanned the years just prior to, during, and after the fall of Jerusalem. The trauma of anticipating, experiencing, and acclimating to war and its aftermath have a devastating effect, not only on the nation, but on God and the prophet as well. The relationship between the three is so close, so intertwined that what happens to either affects them all. God is not so far removed, so aloof, so transcendent that God is unaffected by what happens in the human realm. Quite the contrary: God not only commands, but responds to people, individuals, and nations, according to their response to the divine.

In this story, God’s love is expressed in the reworking of the clay, however painful and unpleasant it might be. “Where is the love?” The love, as Jeremiah would later say in 29:11, is ultimately a plan for good. However, Israel’s decision not to worship God and to worship other gods instead leaves the nation vulnerable to heartbreaking consequences. For now, even if the effort is futile, Jeremiah must issue a clarion call for contrition.

A potter working with clay is an everyday occurrence in the ancient world. As a result of his watching a mundane task, a potter at work, Jeremiah receives God’s instruction to issue a call for repentance. This call for repentance includes an unequivocal warning that the consequences for failure to honor God can be severe. The community needs to know that God’s dealings with the nation are not limited to the blessings of temple theology, but extend to the consequences of covenant theology as well. In other words, God’s love can be tough love. Moreover, God’s tough love is applicable to any nation, Israel included. Clements discerns, “the destruction of Israel and Jerusalem is to be understood as fully within the range of the working of divine providence.”[3]

God and Jeremiah want the nation to see that repentance, and only repentance, could prevent the consequences of its detrimental communal choices. Only repentance can halt its self-destructive path. Yet, even now, Israel’s “future is still somewhat open, awaiting a repentant response.”[6] Although the rest of Israel’s story includes war and exile, Jeremiah’s story of the potter and the clay leaves open the possibility that things could go either way. Even with all of the negatives on the horizon, Jeremiah’s prophecy of disaster contains a “positive message of hope indicating that God could begin to fashion his people Israel anew.”[7]

This glimmer of hope, however faint, that no matter how bad things get the possibility for good remains, is the reason why for generations people return to Jeremiah and his story of the potter and the clay.