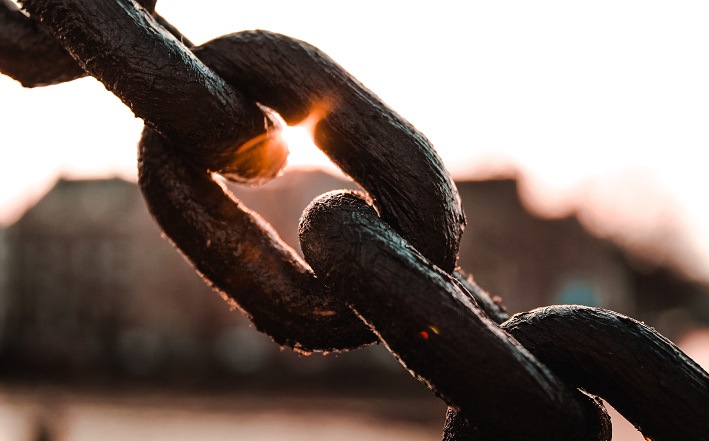 "[W]hatever you loose on earth will be loosed in heaven." Photo by Miltiadis Fragkidis on Unsplash; licensed under CC0.
August 23, 2020

His aptitude is no surprise; he is, after all, Disciple #1 among the Twelve. As the first one called, Peter has participated in every tutorial offered by Jesus from the beginning of the public ministry. His confession suggests that he has been paying attention—for the moment, at least.

Peter has observed the healings of mercy, heard the sermons on justice, and twice tasted bread multiplied and shared with thousands. Saved by the grasp of the Lord’s own hand when stormy waters threatened to sink him, he has professed with others, “Truly you are the Son of God” (Matthew 14:28-33). Sight, sound, taste, touch … through the flesh and blood of his own experience, Peter has learned much about Jesus. He is an excellent student. (In next week’s reading, we see that he also excels at failure.)

The most important element of this episode, however, is not Peter’s capacity as a gifted student; rather, it is the truth to which Peter’s answer points. Peter and his colleagues are in the presence of the One who is anointed by and Son of the living God.

Jesus is not just one prophet among a long line of prophets, as “the people” suggest by their multiple-choice answers (Matthew 16:13-14). (Are they trying to cover all their options, just in case?) Peter’s answer points in the direction of a greater truth: as Son of the living God, this Messiah is also the one who is “God with us” (Matthew 1:23).

That truth is significant because it means (among other things) that everything the disciples have experienced with Jesus, everything they have learned from this Messiah through their limited senses of sight, sound, taste, and touch, is not simply knowledge or experience revealed through “flesh and blood.” It is, in fact, a revelation from God.

Their human senses and experience are imperfect, but God’s revelation is not limited by that imperfection. Jesus’ own “Father in heaven” has revealed the truth through the words and deeds of Jesus. “[F]lesh and blood has not revealed this to you,” says Jesus to Peter, “but my Father in heaven” (Matthew 16:17).

To the extent that the church is built on “this rock” (whether the rock refers to Peter himself, or to the words of his confession, or to something else), it is worth naming the means through which we experience the revelatory power of God. How might preachers help others to see and know God in Christ at work in the world? How might the church model the truth of Peter’s confession to others? What kinds of “experiences of Jesus” do we share? How do we share and embody the words of Peter’s confession?

In its rough contours, Peter’s confession in Matthew echoes the Gospel of Mark. Both accounts place the event in or around Caesarea Philippi, a city outside of the familiar region of Galilee in which Jesus’ ministry has largely taken place. Both include the same basic questions, and in both, Peter asserts that Jesus is Messiah. To that assertion, Matthew includes, “Son of the Living God” (Matthew 16:16).1

An additional distinction may be worth noting. In Mark, Jesus “was asking” his disciples while they went “on the way” into the villages near Caesarea Philippi (Mark 8:27). The imperfect verb, “was asking,” indicates repeated activity while the phrase, “on the way,” calls attention to movement from place to place. Mark frequently uses “the way” as shorthand for the journey of discipleship (see also Mark 1:3; 9:33-34; 10:52; 12:14).2

Matthew retains the imperfect verb, but omits reference to the journey. This omission shifts the focus from journey to place. That is, in Matthew, Jesus asks his questions once they have arrived in Caesarea Philippi rather than during the journey to get there. This geographical signpost might be worth homiletical reflection, as noted below. The place matters.

Situated about 25 to 30 miles north of the Sea of Galilee, Caesarea Philippi was near a trade route that connected Tyre in the West to Damascus in the Northeast. A nearby cave housed a great spring that fed one of the sources of the Jordan River.3 The cave and spring had long served as a sanctuary dedicated to the Greek god, Pan. Greek inscriptions and niches carved into the rock, still visible today, suggest dedications to other pagan gods as well.

In addition to the polytheism represented at the site, signs of power and authority were on display as well. A couple of decades before Jesus’ birth, Herod the Great had built a temple near the spring in honor of Caesar Augustus. By the time Jesus and his disciples visited the region, Caesarea Philippi had been given over to the auspices of Herod’s son, Philip the tetrarch, who established the city as the administrative center of his government.4 By the time the Gospel of Matthew was written, people were likely aware that the Roman commander who led the destruction of Jerusalem in 70 CE had returned with his troops to Caesarea Philippi in celebration of their victory.5

Thus, Jesus’ question—“Who do you say that I am?”—hangs in the air at the intersection of economic trade, religion, and the power of the Empire. It is a question not simply about Jesus’ identity, as if getting the titles right would earn somebody an “A” on a messianic quiz. It is a question about allegiance.

In what or in whom will the followers of Jesus place their trust? Will it be in the privileges deriving from access to opportunity and wealth? In the worship of a prevailing culture’s latest idols? In allegiance to the dominant power of earthly rulers?

Or will they trust, instead, in the One whose life, death, and resurrection reveal the mercy and justice of the living God?

Discussion Questions for Ord. 21A