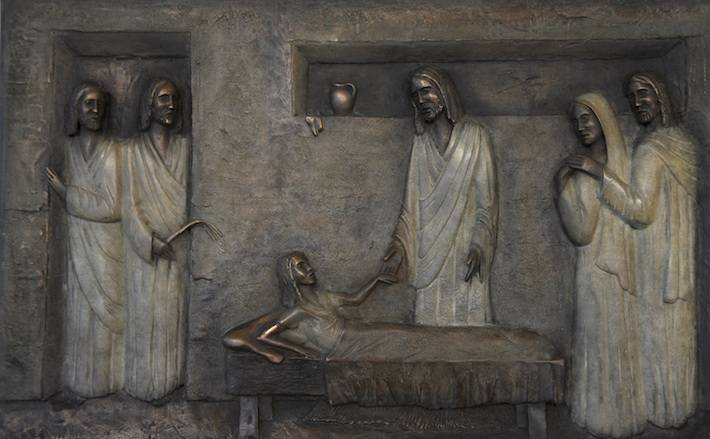 Once again Jesus is in and near the sea and great crowds are gathered around him. In fact the sea and the crowds have shadowed Mark’s narrative for the last several chapters, and it will be helpful to set the context by looking at the way in which today’s narrative is part of a much larger carefully orchestrated mirrored structure:

C1. Parables of the kingdom; everything in parables; secrecy and hiddenness (Mark 4:1-34)

B’. Jesus at home in Nazareth; rejection; amazed at their unbelief (Mark 6:1-6)

All of these events take place around the sea and amid the coming and goings of the crowds who continue to press on Jesus and clamor for his attention. For this the narrative that effectively introduces and summarizes this whole section has already prepared us. Jesus departs with his disciples to the seaside; a great crowd follows him because they are “hearing all that he is doing” (Mark 3:8); he escapes to a boat because of the crowds; the unclean spirits hail him as “Son of God; but Jesus orders them to secrecy (Mark 3:7-12). So the sea and the crowds stalk his “doing” in this section, and now at the beginning of today’s reading, they are still with us. In fact five times we hear of the crowds in this story (for the crowds see: Mark 3.9, 20, 32; Mark 4.1, 36; Mark 5.21, 24, 27, 30, 31). Their presence, the presence of the chaotic sea, the series of miracles, Jesus’ teaching about the kingdom, and the sporadic commands to secrecy all press the issue of faith and our response to this Jesus. We join the disciples’ question as the chaotic sea is calmed at his command: “Who then is this?” (see last Sunday’s reading).

A Two for One Deal

If the totality of these scenes escalates the reader’s sense of awe, then today’s story brings the whole to its climax in a way that prepares for and highlights the succeeding story of Jesus’ rejection; it will take us back to the plots of the Pharisees and Herodians announced in Mark 3:7. But now in a marvelous narrative device so characteristic of Mark two miracle stories — a woman healed and a young girl raised from the dead — are played out in point-counterpoint conversation with one another. The effect is to magnify the impact of the stories and at the same time to focus the issue of healing (salvation) and faith which literally accompany Jesus’ actions.

Once the story locates us among the crowds alongside the sea, without transition, a leader of the synagogue arrives, falls at Jesus’ feet and “begs him repeatedly” (the language exactly repeats that of the demon, Legion, in the previous story, Mark 5:10; it thus effectively pairs these two of the longest stories in Mark’s gospel) for the life of his “dear little daughter” (“that she may be saved and live!”; Mark 5:23). When at this point we are told that without a word of response Jesus “went with him” with the large crowd continuing to press on him, we have every reason to expect a successful outcome. The prayer is right; the purpose is worthy; the prospect of healing and life secured.

But “now” there is this woman! She not only interrupts the narrative as well as our expectations, but in addition the comparatively lengthy narrative of her medical history and her silent ruminations about her anticipated actions strain our patience. Yet she, too, even in her silence, joins the pleas of the father in anticipation of the “salvation” she seeks. “If only I but touch, I will be made well” (Mark 5:28). Against Jesus’ accusatory seeking for the one “who touched me” the two-fold “immediately” of the narrative will not allow the power that flows from Jesus and the effectiveness of the healing to be disguised.

The Surprise of Faith

Jesus may not know “who,” but the woman certainly knows “what.” In fear and trembling she falls down before Jesus and confesses the truth of what has happened to her. She had hoped for healing, but her hopes were far too small. The fear and illness that have defined her life still have their grip on her. But this is the way of the good news of the gospel. Now Jesus’ words endow her with more than she could ever have imagined. She is no longer just “a woman,” but now is claimed as a “daughter,” one whose “faith” has “made her well” (“saved” her). Now words and a promise have been added to the new reality in her life. She receives Jesus’ benediction that invites her to leave in “peace” (shalom). And almost as an afterthought, by the way, she receives the confirmation that she has been healed of her disease (Mark 5:34)

But the story is not yet over. In mid-sentence, while Jesus is still mouthing his benediction on the woman’s faith, people arrive to say that the leader’s daughter has died. In the same instant one person’s hopes have soared; but another’s have been dashed to pieces. One has been claimed as a daughter; another’s daughter has been lost. Faith is clearly at risk. The people put it so clearly, “Why even trouble the teacher any further?” What hope is left?

But Jesus’ words will not let the dashed hopes and fears remain unchecked. “Do not fear, only believe,” he says (Mark 5:36). Only here and in the parallel reading in Luke 8:50 are these two options juxtaposed so clearly in the New Testament. Once again his words call attention to the thin line between fear and faith (see my remarks on the gospel for Pentecost 4). A better translation would also serve to underscore the point. “Do not fear, only believe” fails to represent what Jesus really is saying to the leader and to us. If the command is “do not fear,” then it is already too late, and does not address the leader’s or our reality. The problem is as so often, we are already consumed by fear, and the prospect of faith remains too distant. It should rather be read as something like “Stop being afraid,” and “Go on living by faith.” The present tense of both verbs calls attention to the transforming power of Jesus’ word to change our lives from fear to trust, a transformation in which the prospect of life and salvation now appears in a wholly new dimension.

The Rest of the Story: Amazement and Secrecy

From Jesus’ word of promise, with the prospect of transformation from fear to faith as good as done, it remains for the rest of the story simply to fill in the details. We read them as ones who hold our breath with just a touch of delight as we follow the working out of what we already know to be the outcome. We smile as we oversee the weeping and moaning; we chuckle or wink knowingly at the misplaced laughter of the crowds who do not know what we know. And our hearts are drawn when Jesus takes the little girl by the hand and commands her “Arise” (Once again the word verbally anticipates another resurrection, while the reference to her “twelve years of age” seems whimsically to make this story fit so nicely with the woman’s “twelve year” illness, but otherwise leaves us wondering why this strange detail). We applaud the crowd in their amazement at what has just happened, especially since it matches our own amazement and wonder at these two stories in which faith and salvation and healing have met together in the presence and power of this Jesus. But once again we are left with just a bit of wonder at Jesus’ commands not to tell anyone about these events. Certainly we are invited to continue to ask just where this story intends to lead us. What will it be like to follow this Jesus on the journey of discipleship? In what way will our lives be transformed by this One whose words call us to “stop being afraid” and instead to “live by trust” in the promise of the good news of God’s kingdom among us (Mark 1:14-15)?