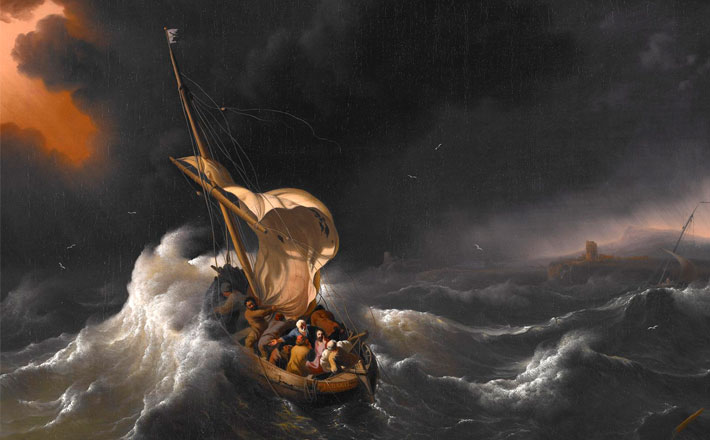 From the early rabbinic sages, to today’s Vacation Bible School materials, the theme of the victorious underdog profoundly resonates with people across cultures. Nearly every civilization can share some similar story from within its cultural repository. Something deep within us delights with the success of someone like Susan Boyle defying the odds, and winning a national talent show and an enormously successful recording career.

1 Samuel 17 stands in this underdog tradition. Although recent attempts have tried to underplay the advantage difference between David and Goliath, in reality, this was not merely a mismatch, but an upset of ridiculous proportions, even beyond historical shockers like Buster Douglas knocking out Mike Tyson (1990) or Harry Truman defeating Thomas Dewey (1948).

Goliath was a Philistine, meaning that he came from a culture that was comprised primarily of mercenaries, who traveled from the Aegean and wrought havoc from Syria to Egypt. The Philistines were one of the major reasons that the Late Bronze Age Empires suddenly collapsed at the end of the Bronze Age.

And among these Philistines, Goliath, was the fiercest warrior of the entire group. Goliath was the largest and strongest human, long experienced in warfare, and prepared for both hand-to-hand combat with the sword as well as distance battles with his spear. Despite his size, he would have had to be very quick and nimble. He also had an armor-bearer, presumably the best, who insured that a renegade spear would not injure the Philistine warrior.

Against this alpha-male, we have David, who was called a “boy” by both his own king (v.32) and enemy (v. 42). David had zero experience in war. He could hardly move when wearing armor. He was never trained in sword, nor spear, but had to rely on the device of a boy, and stones from the wadi.

But David has a special background. As a tender of sheep, he was used to protecting the flock against renegade animals. Of course, today’s shepherds are armed with guns or at least cell-phones to call in help. But a young David had to deal with renegade bears and lions by himself.

It’s not that David was stronger than bears or lions. But that lifestyle helped shape David to focus on God. Imagine going three hours without your iPhone in the middle of the day, sound tough? Now imagine going three years without it. During this time, you witness the different inspiring landscapes surrounding Bethlehem, while taking care of a flock of sheep through their seasons of life. You are constantly witnessing the miracles of God through sustaining of these sheep. Most importantly, the wildlife had fostered a deep sense of reliance on God for protection.

I believe that this is the crux of vv. 34-37, as David explains his background. David is not as tough as a bear, nor as strong as a lion (cf. Judges 14:18). David knew that he had no business defeating these animals one on one, but he did know this, as he declared in v. 37, that “God saved/rescued/delivered him.”

This season as a shepherd allowed David to naturally respond to Goliath’s taunts in v. 45 with “You come to me with sword and spear and javelin; but I come to you in the name of the LORD of hosts, the God of the armies of Israel, whom you have defied.” The biblical text proceeds into a very Tarantino-like account that is thankfully not reflected in most children’s illustrated Bibles.

Within the subtext, this actually is a huge underdog story, but with Goliath, and not David, as the enormous underdog against the power of God. Although David is youthful, his confidence is well placed into divine hands. How else could the young shepherd manage to stand and defy the greatest warrior of his time?

Perhaps we enjoy these stories so much because we all face challenges that seem enormous against us. Following the courage of David does not begin in the Valley of Elah while facing the Philistine army. Rather, the time of shepherding is a crucial part of this narrative. We can begin by focusing on the many ways of the past that God provided, sustained and protected us.

And then when we face that enormous giant, whether sickness, family breakups, financial disaster, addictions, shame, the same God who protected and provided will do the same thing for you again. It will be an unmitigated victory, but only if we stand with God.