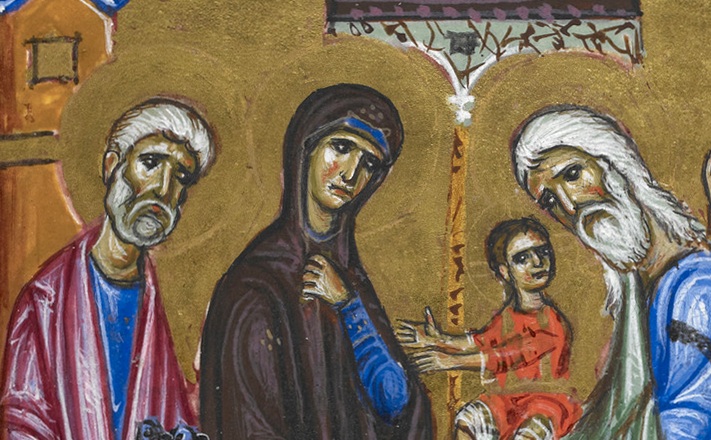 There’s just something about that name.  But in the saying of the name, there is an absence of just what is the something special. We identify a plethora of adjectives, but are limited in complete phrases that employ verbs depicting what Jesus has done. Not the doctrinal refrains Jesus saves, or Jesus hears our prayers, or even Jesus loves me.

As a present day testimony to the arrival of peace on earth, exactly what does salvation look like? What brings us to describe Jesus’ holiness? What activity of God TODAY renders the description good, faithful, or just? Can today’s listener join the throng of witnesses who call Mary’s son our savior? Our telling of the stories of old becomes barren if they do not provoke memories of present day experiences that can only be named as the presence of God.

Even as we read the unfolding drama Luke presents, we strain to appreciate the presence of God’s peace as we witness those who suffer wrong. And yet, already in the birth narration, the poor, the widow, and the weak are helped to be strong in the name of Mary’s baby boy. Luke has named those who testify to the arrival of God’s promised one. And they have named God as faithful.

Luke has drawn us into a story of unique characters who stand out in their context. Some are not named, but each represent very real lives and circumstances, very real sorrows and hopes. Like the unnamed workers effected by the decision making of politicians, the shepherds represent a number of common folk, seemingly incidental to the decision making of Caesar, but paramount in the decision making on behalf of the one who will be called the Son of God. Only recently have we truly attended to their status in the first century — the workers, the rest of the world. These are the ones who occupy the guest room in Bethlehem to see if the angel’s message is true.

The angel has named Jesus as the one who accomplishes the glory of God. Jesus is of the house of David; he is Savior; he is Messiah; and he is Lord. Mary accepts this name and so this will be the message proclaimed for generations to follow. More than the sign of the promise of peace, God’s salvation is made available to all humankind. The heritage of Israel, the one who restores wholeness to all the world, the long-expected anointed one who demonstrates the present in-breaking of the reign of God.

One of my favorite newer Christmas songs is Mark Lowery’s Mary Did You Know. The Gospel writer Luke suggests by the witness of the angels and the circumstances surrounding the birth, Mary might just have had some awareness of the life she would lead as the mother of the one that will be called the Son of God. This song is filled with great promise that enters into great pain. Like the words of the angel, this child’s arrival is good news to all. God is with us. But how does one comprehend anticipating the depths of sorrow and the heights of joy? The song describes some things that gives one pause. Pause, when an alcoholic prays, and a stranger hands him a hundred dollars. Pause, when the doctor says the cancer is all gone. Pause, when the wayward child returns home willingly, and the other siblings join the parents to receive all gladly. Pause, when your loved one returns with the last troops from overseas.

Will those who have hurried to sing the carols of Christmas this year depart glorifying God? Have they seen in the body of Christ that gathers in sanctuaries a scattering of the presence of God’s peace in the world that brings amazement? Does our action enable people to call the name of Jesus in such a way that glorifies God? Has the church provided a means for the world to recognize the arrival of God’s peace, or is the good in the world attributed to hospitals, schools, and government? Do we name the ones who speak of glimpses of the reign of God yet to come or those who fill our stocking today with gadgets that need replacing before the year ends?

Indeed a child has been born, found in the very place to which the shepherds were sent. The promises of the messenger Gabriel are unfolding as announced. The credibility of his words lends credibility to his declaration that the one born will be Ancient Israel’s awaited Messiah. Born as promised, his identification can be accepted. Naming God as faithful, the shepherds depart. Still the ministry and its fulfillment are yet anticipated.

Such was the miracle of Christmas. Familiar anticipation paralleled with signs of doubt, fear, and wonder. The agent of God is born in Bethlehem, the House of David, the Shepherd-King. “His name shall stand forever. That name to us is love.”2

2 Closing line from the Christmas Carol Hail to the Lord’s Anointed by James Montgomery.