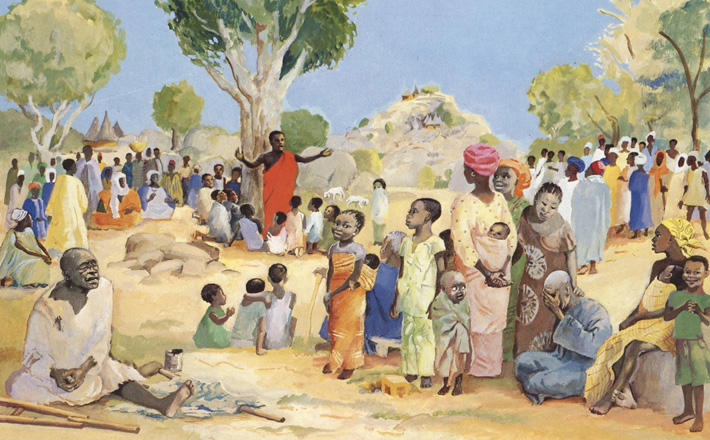 JESUS MAFA. The Sermon on the Mount, from Art in the Christian Tradition, a project of the Vanderbilt Divinity Library, Nashville, Tenn.
February 2, 2014

In Greek, the words are ho logos ho tou staurou. Alexandra Brown points out how curious the phrase would sound, both to Jews and Greeks. “For Jews, the logos was the law and Wisdom … For Greeks, the logos signified the reason behind the cosmic order and the advances of philosophy in understanding that order.”1 Brown concludes, “This ‘logos of the cross’ constitutes a contradiction in terms offensive both to the reasoned and to the religious mind.”

This contradiction gets exactly to Paul’s point. The message about the cross is confounding to the wisest of human minds. Yet what appears as foolishness (cf. 1 Corinthians 1:23) is really “the power of God and the wisdom of God” (1 Corinthians 1:24).

Still, it is far-fetched. This would be especially true for people like the Corinthians. If Paul’s discussion of knowledge in 1 Corinthians 8 can be taken to represent them more or less fairly, some of them at least were impressed with their own knowledge. Paul knows he cannot win an argument based on who has the more reasonable position, so he speaks of God’s wisdom as only really making sense in an entirely different realm. He contrasts “the wisdom of the world” with “the foolishness of our proclamation,” with the advantage going to God’s foolishness.

At first Paul’s argument sounds like a series of baseless assertions. Paul agrees that the message of the cross is, from any normal human vantage point, foolishness, but nonetheless asserts God’s wisdom in it. The text seems to go around in circles: if you think the cross is foolishness, your conclusion just proves that you are perishing.

After wandering in assertion for a while, Paul makes two publicly accessible arguments. First, Paul directs his readers back to the prophets. This upending of human wisdom on God’s part is not without precedent! In fact, it is arguably in character for God. Through the prophet Isaiah, God had said, “I will destroy the wisdom of the wise, and the discernment of the discerning I will thwart” (Isaiah 29:14).

A God who used the nations to execute judgment on Israel — and then stopped the nations in their tracks — could certainly use the cross and Paul’s preaching of the same to enact salvation for Jew and Greek alike. In the distant past, God’s wisdom was confounding to conventional human wisdom.

So it is also in the recent past. “Consider your own call, brothers and sisters,” Paul says. This begins the second of his arguments in support of the point that God’s wisdom is not the world’s wisdom.

Though we do not know the precise demographic makeup of the Corinthian church, the scholarly consensus follows Wayne Meeks’s conclusion in The First Urban Christians that Paul’s congregations included a mix of social classes with all except people of the very highest and very lowest social locations likely represented. In 1 Corinthians 1, Paul does not say, “None of you were wise by human standards,” but rather, “Not many of you. ”

Perhaps a few people in the congregation were wise, powerful, and/or of noble birth. Maybe a few would actually win the wisdom and power game if played according to the world’s rules. But most of them would not, and quite apart from the question of how God might be at work in Christ, Paul’s observations imply that most of the Corinthian congregation — who have themselves not been all that wise or powerful by the world’s standards — should perhaps ask themselves if they really want to play by those rules. If they were to stay firmly planted in the old aeon and its value structures, would they not be seen as foolish for a whole other set of reasons?

David Lose and others talk about preaching as telling the truth twice: preachers tell us the truth in terms of our distance from God’s vision of life for us, and preachers tell us the truth again of God’s work to bridge that distance and raise us up to that life. There is a great foolishness in the Corinthians putting on airs as they seem to be doing, enthralled with their own importance, their own wisdom, strength, knowledge, and so on. The first truth about them is that they are self-impressed little people. I work with a native of the American South who sometimes describes people who are similarly self-impressed by saying, “He thinks he’s all that and a bag of chips.”

By the last of the sentences that begin, “God chose … ” the cross and Christ’s death on the cross are again Paul’s focus: “God chose what is low and despised in the world, things that are not, to reduce to nothing things that are” (1 Corinthians 1:28). God’s choices of the Corinthians and of the cross merge until each of them helps to make sense of the other, and both of them look to be in character for God.

God chooses the way God chooses not just to demonstrate the capacity to upend the status quo, as if God were saying by these choices, “I’m bigger than you.” God chooses the foolish/weak/nothing in order to upend the status quo and in order to create life. “[God] is the source of your life in Christ Jesus,” Paul says (1 Corinthians 1:30), and then he describes the life we share with Christ in terms of righteousness, sanctification and redemption.

Each of these experiences — righteousness, sanctification, and redemption — is a window on the upside-down foolish wisdom of God. That is to say, not just at the start of our life in Christ when we receive his righteousness, but throughout it as he works holiness in and through our lives, until even our death is redeemed, God is forever confounding conventional wisdom.

Happiness has become a science in recent decades.

The historical situation of this text is not entirely clear.

There are two divergent ways to think about Psalm 15.

On Beatitudes and Blessing