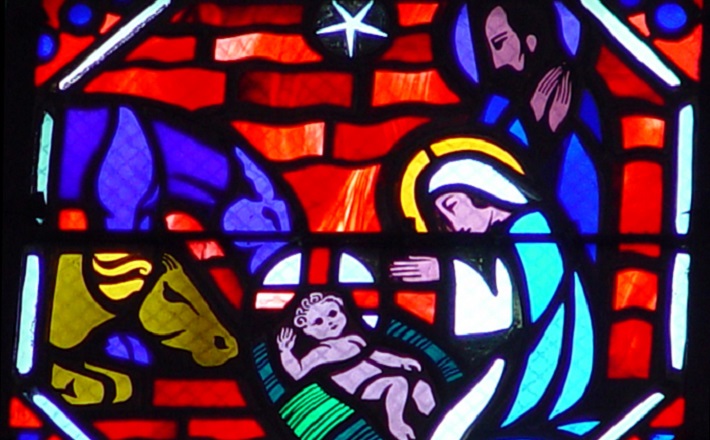 These comments on Luke 2:8-20 continue the contrast, developed in connection with Proper 1 (December 24, 2015) between the present, broken age (in which Caesar rules) and the realm of God which turns toward final and full manifestation in the life, death, resurrection, of Jesus, and continuing power of the realm through the Holy Spirit.

In 2:8-20 Luke pictures God sending the news of the birth and meaning of Jesus to shepherds. Preachers can have a lot of fun describing eight year old shepherds in the Christmas pageant in ill-fitting bathrobes smelling of too much bleach.

Shepherding was central to ancient economy. People in Mediterranean society used nearly every part of the animal — meat, milk, hide/hair, even dung.

However, the lives of shepherds in the ancient world were often difficult. Shepherds frequently lived alone for long periods of time. They were often on the move, taking the flock from pasture to pasture. The weather could be uncomfortable with heat, cold, drought, rain, or lightning. Wild animals could be threatening. Some shepherds owned their own flocks, but many were hired hands who were neglected or exploited by the (often absentee) owners. Shepherds could be rough and even anti-social. Hireling shepherds sometimes had reputations for cheating their owners. Jacob, for instance, stole the best sheep from Laban’s flocks (Genesis 30:25-43).

Moreover, the Roman Empire assumed a rigid class pyramid in which people in the upper classes had incredible benefits in comparison to the lower strata, where the shepherds were located.

For Luke, the lives of the shepherds epitomize human existence in the present, broken age. God sends the news of the birth of Jesus (and the turn towards the final coming of the realm) to shepherds before anyone else to impress upon the Lukan community that the realm is indeed good news for all people, and not just the upper social strata.

A polemic against Rome is in the background. Romans sometimes used the term “good news” (Greek: euangelion, sometimes translated “gospel”) in association with imperial figures and with the decrees of the Emperor. Roman imperialists often employed the titles “savior” and “lord” (ruler) to Caesar. Luke wants the listening community to compare and contrast Jesus with Caesar, and the realm of God with the Roman Empire. Which one offers the better news, the better salvation, the better rule?

If the announcement is, are the shepherds “terrified” when the angel comes and the heavens are flooded with mega-watt light? Jewish tradition sometimes associated such light with theophany. Fear is often an initial response to mysterium tremendum. Moreover, many people expected the transition from this world to the next to occur through an apocalypse, accompanied by such dramatic cosmic displays. The apocalypse would also include a judgement. If the shepherds had engaged in unethical behavior, they might have thought they were about to face the final judgment.

A transforming Lukan theme occurs when the angel announces the “good news … for all people.” Luke viewed the ministries of Jesus and the church as means through which God would bless gentiles, and thereby keep the promise God had made to Sarah and Abraham to bless all the families of the earth (Genesis 12:3). Furthermore, Luke’s “all” includes all social classes and all other forms of distinction in human community. All who repent, are baptized, and receive the gift of the Holy Spirit, can join the movement to the realm (Acts 2:38; 10:34-11:18).

Occasional preachers speak in caricature of the third gospel as the book for the poor oppressed, and of Jesus seeking to reverse the social order. But a closer reading reveals that in the Gospel and the Acts, Jesus and the church welcome people of means (and all others) who repent, are baptized, and manifest the Spirit. To be filled with the Spirit includes putting one’s material resources in service to the realm. Luke does favor one group at the expense of others but offers the realm to all.

Luke assures listeners that this message is not just the fantasy of a single angel with an overactive imagination. Luke fills the sky with an angel chorus that makes the Mormon Tabernacle Choir sound like a children’s ensemble. In contrast to the inequities and violence of life in the Roman Empire, God promises peace, which here is a synonym for the realm of God.

The angel points to an underwhelming sign that the last great renewal is underway: The shepherds will find a child wrapped in bands of cloth much like any other child, and lying in a feeding trough. For Luke, the way of the realm is not always through dramatic demonstrations (such as the technicolor angels) but often comes in subtle ways.

A preacher might identify points at which the experience of today’s nativity congregation is similar to, and different from, the shepherds. For individuals and communities who are at places similar to the shepherds, the Nativity sermon could offer assurance that God through the Spirit continues to move towards the hope of the realm. Some folk today are in personal or social circumstances more like those who benefitted from the Roman Empire, especially (though by no means exclusively) the wealthy. In the latter case, the sermon might offer Christmas repentance as the first step towards joining the movement to the world signaled by the child wrapped in bands and lying in a feeding trough.