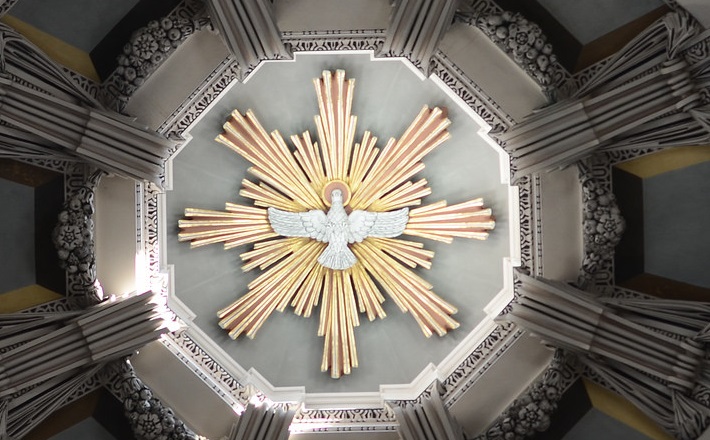 Many congregations use actual water as a part of the remembrance, perhaps using a piece of greenery to splash water on the congregation or passing bowls of water among the congregation so people can put their fingers in it and perhaps apply it to their faces. The gospel readings for today could help frame such a practice.

Luke pictures John the Baptist as an end-time prophet who announced that the apocalypse was about to occur that would end the present evil age and finally and fully bring about the realm of God, a new world in which all things would live forever in love, peace, justice, mutual support, freedom, and dignity.

John called people to repent and to be baptized for the forgiveness of sins in order to be part of the coming new world. Repent is to turn away from complicity with the old age and its values and behaviors and to turn towards the coming realm. Baptism gave baptisands a physical assurance that their final destiny was no longer determined by the brokenness of the old age (and its heinous rulers) but would be the realm God. Baptism was an invisible mark initiating those who received it into a community anticipating the realm.

According to Luke 3:15-17, however, John is not the one through whom the apocalyptic transformation will take place. The coming one — Jesus — will baptize the community with the Holy Spirit and fire and will carry out the final judgment (separate the wheat and chaff), i.e. the coming one will be the catalyst for the realm and will leave the Holy Spirit to empower the community to continue to witness to the realm after Jesus ascends.

In many congregations, repentance has been reduced to feeling sorry for personal moral transgressions. A preacher might help a congregation reflect on the wider ways in which the community is complicit in old-age practices and values, and hence. As the congregation enters the new year, perhaps they could repent of such connections.

When Jesus came to be baptized, he came to be publicly identified as the pivotal figure in the movement towards the realm. Moreover, his baptism signaled that God was now taking steps through the ministry of Jesus to signal that the turning of the ages expected by John has now begun to take place. As preachers are want to say, it is both present and future: its signs in the present point to the future consummation at Jesus’ return.

Jesus’ baptism takes place in community. It is not a private occurrence. This communal dimension reminds listeners that they when they are baptized, they become part of a new social world. My sense is that a good many people today are moving away from the radical individualism of modernity and are longing for community. A preacher could help folk identify the church as such a body.

The voice from heaven (God’s voice) identifies Jesus as God’s son, in whom God is well pleased. In first century context, these words have less to do with the nature of Jesus and more with his purpose. God’s words recall two texts. The Jewish people used Psalm 2 at the coronation of a new monarch. In 2:7, God adopts the monarch as God’s son. Thus, God adopts Jesus as divine representative in the final transition from old age to new age.

Isaiah 42:1-4 is the first of Isaiah’s servant songs that describe the vocation of Israel as a community to serve God’s purpose, which is to bring justice to the nations (gentiles). Justice here refers to qualities of life similar to those of the realm — communities with covenantal support for all. As the gospel of Luke unfolds, we will learn that Jesus will suffer because other people oppose the realm in the way that Isaiah saw Israel suffer for standing up for God’s justice.

Apocalyptic theologians of antiquity anticipated that God would begin the apocalypse by opening the barrier between heaven and earth and sending angel hosts to destroy and reconstruct. Luke draws on this motif by describing the heavens opening over Jesus. However, the Spirit descends without the angelic hosts. From Luke’s point of view, that will occur only when at the second coming.

Of course, according to Jewish tradition, the Holy Spirit has been in the world since creation. The difference for Luke is that the Spirit now adds eschatological manifestation to its repertoire. The Spirit falls on Jesus not because the Spirit was not otherwise present but with apocalyptic intensification. For Luke-Acts, Jesus is the model for the apostles who are the models for the church. The apostles and the church do everything Jesus does because they have the same Spirit.

A preacher might help a congregation recognize that in the Gospels and Letters, repentance, baptism, and life in the Holy Spirit have little to do with institutional affiliation (e.g. becoming a member of a church). At one level they are saved from being ruled in the present by brokenness, and from ultimate condemnation at the apocalypse. But from a more important level, according to Luke, those who repent, are baptized and realize they are empowered by the Spirit not only to become part of a movement towards the new world but to invite others to join the movement, to work the signs of the realm, and to embody the qualities of the realm in their common life.

As a process theologian, my impression is that increasing numbers of Christians no longer subscribe to a pure apocalyptic worldview. However, those who do not anticipate a singular apocalyptic event often recognize the brokenness of our world, and believe that God is present now and always to lure the world towards values and practices that more fully reflect the characteristics of the realm. In this frame of reference, people still need to repent of complicity with brokenness and to join in community with one another and with God in the movement towards a better world.