Paul’s letter to the Ephesians opens with a loving prayer. 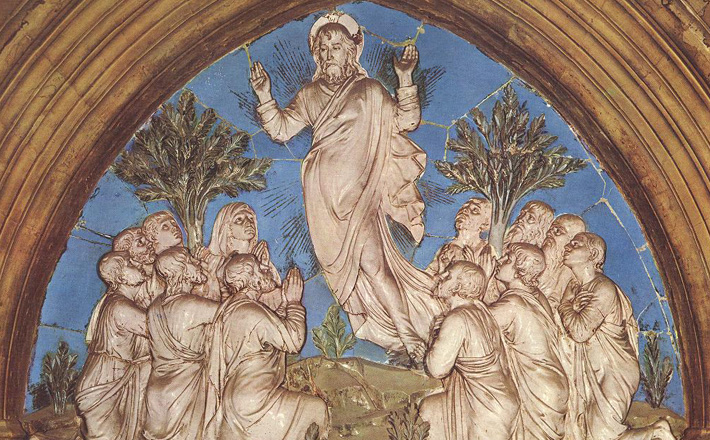 Paul’s letter to the Ephesians opens with a loving prayer.

He has heard how they are fulfilling the commandment to love God and love their neighbor. And he has also heard that their faith in Jesus is strong. Shouldn’t that be all he can ask? But, as Paul would say, “By no means.” He reminds them that they have only begun their journey and I take comfort in and am encouraged by the fact that, given all of that he knows about the church in Ephesus, still he prays that Jesus will give them “a spirit of wisdom and revelation as you come to know him” (Ephesians 1:17).

Paul’s prayer reminds us that learning to know Jesus does not happen all at once. Rather, it happens slowly over time, perhaps over our life times. As we reflect upon the portrait of the risen and ascended Christ painted by Paul, may the eyes of our hearts be enlightened — what a beautiful image.

The gospels present us with the portrait of the man Jesus. A man who walked, talked, ate with friends, was angry with religious leaders, and who scolded his students. In a way, this is the man with whom we can relate because we also walk, talk, eat, are angry, and become frustrated with friends and foe alike.

Far above place
Paul uses the metaphor of place to help us to understand that the man Jesus, who had walked the roads of earth, was no longer limited to that earth-bound existence. Think back to the beginning of Jesus’ ministry. Following his baptism in the river Jordan, Jesus was tempted by the devil. In the second temptation the devil led Jesus “up and showed him in an instant all the kingdoms of the world … “To you I will give their glory and all this authority” (Luke 4:5-6.) But Jesus would not worship the devil, “Worship the Lord your God, and serve only him” (Luke 4:8). Through the power of God Jesus is now far above everything.

And what place is that? The risen Christ is seated at the right hand of God. Throughout the scriptures we are reminded that this is the place of highest honor and veneration. Seated in the heavenly place Christ is now able to see “in an instant all the kingdoms of the world.” You might take a look at the portrait of our world taken by the crew of Apollo 17 on December 7, 1972. This portrait of our earth, that has come to be known as the “Blue Marble,” gives us that distance, that sense of the “heavenly places,” the ability to see “all the kingdoms of the world.”

Far above power
Paul also reminds us that the man from lowly Nazareth — “can anything good come from Nazareth” (John 1:46) — is now far above all earthly powers. Paul wants to make sure that we understand that the power given to the risen Christ cannot compare with anything on earth so he names them all, “far above all rule and authority and power and dominion” (Ephesians 1:21). Kings, queens, presidents, prime ministers, dictators, emperors, tyrants, czars — the risen Christ is far above them all.

Paul also uses the images of enthronement to remind us that God has put all things under Christ’s feet and “has made him the head over all things” (1:22). We are to grow in our knowledge and understanding of the one whose power is limitless.

Far above time
And finally, Paul reminds us that the risen Christ is far above the most limiting of all, time. We are captive to our limited time on this earth, this blue marble, but not the risen Christ. Our Lord Jesus is “above every name that is named, not only in this age but also in the age to come” (1:21). Christ is “the Alpha and the Omega,” the one “who is and who was, and is, and who is to come” (Revelation 1:8). As John sang at the opening of his gospel:

He was in the beginning with God.
All things came into being through him,
And without him not one thing came into being.
What has come into being in him was life,
And the life was the light of all people (John 1:2-4).

As a pastor I used to dread preaching assignments on Ascension Day.

The Ascension seems like the poor cousin among church festivals: often overlooked, passed over without being missed.

Since ancient times Psalm 47 has been used for worship.

Paul’s letter to the Ephesians opens with a loving prayer.
Print All Text Print All Commentary