This week’s passage from 1 Kings 3 introduces Solomon from two angles: private and public. 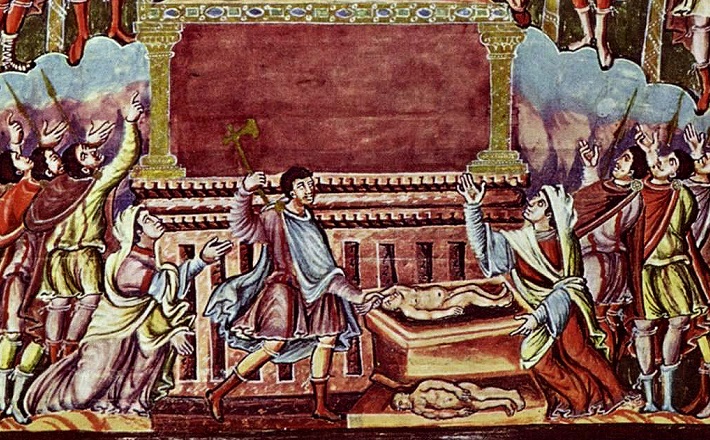 Judgment of Solomon, attributed to Ingobertus from Art in the Christian Tradition, a project of the Vanderbilt Divinity Library, Nashville, Tenn. Original source.
October 28, 2018

This week’s passage from 1 Kings 3 introduces Solomon from two angles: private and public.

First, the private view: in verses 4-15, the narrator gets us right into the sleeping brain of Solomon. In his dream, Solomon talks with God. God starts the conversation with a command: “Ask what I should give you” (verse 5 NRSV). Different translations yield slightly different renderings of this line, but the first word God utters, “ask”(Hebrew she’al), is inarguably an imperative.

While in some ways this command to “ask” feels as if God is offering Solomon a blank check, it strikes me as more of a test of Solomon’s fitness for kingship. Will Solomon answer rightly? After all, the narrator of 1 Kings has already expressed ambivalence about Solomon, saying, “Solomon loved the LORD, walking in the statutes of his father David; only, he sacrificed and offered incense at the high places” (1 Kings 3:3).

This is the classic struggle of the Deuteronomistic History, which revels in the glory brought to ancient Israel by the monarchy, and yet also condemns the apostasies of the kings that ruled it.1 The narrative will demonstrate this ambivalence throughout its account of Solomon’s reign (1 Kings 3-11), praising the king’s wisdom, wealth, and work, yet lamenting his worship of the foreign gods of his many wives.

If God’s command is indeed a test, Solomon passes with flying colors; readers ancient and modern are assured of Solomon’s divine fitness for office. God is so pleased that Solomon has asked for discernment instead of money, long life, or revenge, that God grants Solomon’s request with some bonuses to help him along the way. Solomon will receive unparalleled wisdom (verse 12) and unparalleled riches and honor (verse 13). God also offers him long life, but this time with conditions: “If you will walk in my ways, keeping my statutes and my commandments … ” (verse 14).

Solomon has this dream at Gibeon, where he has traveled to offer sacrifices. In Deuteronomistic perspective, Jerusalem is the only proper place to worship. It is “the place that the LORD your God will chose” that we hear about so often in Deuteronomy. While we might give the king the benefit of the doubt because the Temple has not yet been built in Jerusalem (see verse 2), the arc of this story points toward a symbolic transformation in Solomon.

After his encounter with God in his dream, Solomon moves to Jerusalem to offer sacrifices there in front of the Ark of the Covenant instead of staying at Gibeon (verse 15). His worship at Jerusalem gives evidence that his gift of discernment has begun to take hold, even if some of his later worship practices will invite reproach.

Having established Solomon’s private piety, the narrative now turns to his public persona. The account of the dispute between the two prostitutes is offered as further evidence that God has blessed the king with wisdom. At its conclusion we learn that “All Israel heard of the judgment that the king had rendered; and they stood in awe of the king, because they perceived that the wisdom of God was in him, to execute justice” (verse 28). This story is great for Solomon’s PR campaign!

The king, at the highest rung of the social ladder, is adjudicating an argument between two women who are very close to its lowest rung. They have little to no political, social, or economic capital, even within the narrative itself, where they are never named beyond “the first woman” and “the other woman.” Solomon’s attention is accessible; he attends even to the least powerful in society.

However, the same power dynamic that showcases Solomon’s accessibility also allows a spectacle to be made of the two women. Yes, the story presents a clever riddle, but it is also a heartbreaking tale of cruelty, loss, and grief. Is Solomon as macabre as he is wise? Would he ever blink in this game of chicken? Will the true mother reveal herself before Solomon slices apart the baby?

The power that Solomon holds in this moment is breathtaking. In many paintings of this story, guards dangle the baby upside-down, clutching the infant’s ankle in one hand and a sword in the other.2 That detail reinforces the vulnerability of the people under Solomon’s charge. Babies, prostitutes, widows, orphans: society’s most defenseless members live and die at the will or whim of the king.

Even as this story illustrates the depth of Solomon’s wisdom, it reinforces for the reader that Solomon’s personal piety is necessarily a political issue. If the king wants riches above all else, those riches will come at the expense of the poor. By choosing wisdom and discernment, Solomon has chosen care for his subjects over glory for himself.

For the narrator, this story is not about the women or their babies; it is all about Solomon. Nevertheless, readers will doubtless be drawn into questions about the scenario itself. Is the accusing woman trustworthy? How does she know the infant’s cause of death, if, by her own admission, she was sleeping when it happened (see verses 19-21)?

The story also operates on some troubling assumptions about the grieving mother, namely that, in the depth of her grief, she would be indifferent to the death of another baby, even after she went to the trouble of trying to make the second infant her own. But that kind of wrenching, irrational, violent grief is acknowledged elsewhere in Scripture, and particularly in the psalms of lament.

The troubling ending to Psalm 137 — “Happy shall they be who take your little ones and dash them against the rock!” — comes particularly to mind. Neither of these texts should be read as advocacy for violence in the face of grief; instead, they are startling reminders of the depths of human despair and our continual yearning for God’s presence among us.

1 Many scholars believe Joshua, Judges, 1 and 2 Samuel, and 1 and 2 Kings all share the same authorial and/or editorial perspective steeped in Deuteronomic theology. Looking back from exile at the history of the Israelite and Judean monarchies, the narrative blames the kings for breaking the covenant and causing Israel to be sent into exile, even as it celebrates some of their achievements. This ambivalence to the monarchy can be identified to a greater or lesser extent in all of those books.

Generous God, you gave your servant Solomon wisdom so that he might govern your people well. Grant us your wisdom, so that we might perform our life’s duties with gratitude and wisdom. We pray these things in the name of Jesus Christ, our Savior and Lord. Amen.

This week’s passage from 1 Kings 3 introduces Solomon from two angles: private and public.
Print All Text Print All Commentary