What if those pushed offstage should play the leading role? 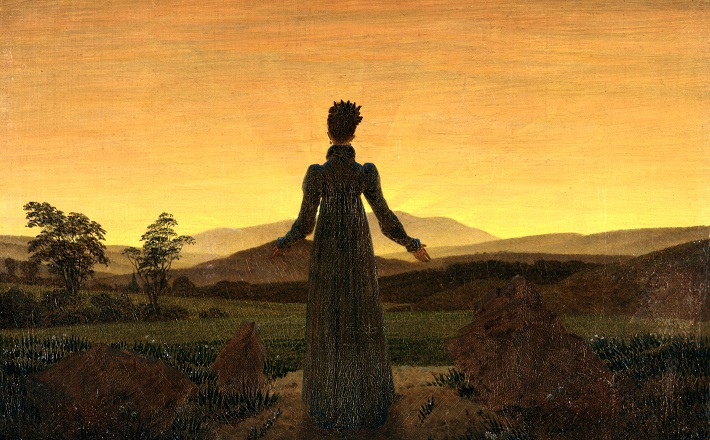 Woman before the Rising Sun (Woman before the Setting Sun) by Caspar David Friedrich from Art in the Christian Tradition, a project of the Vanderbilt Divinity Library, Nashville, Tenn. Original source.
May 8, 2022 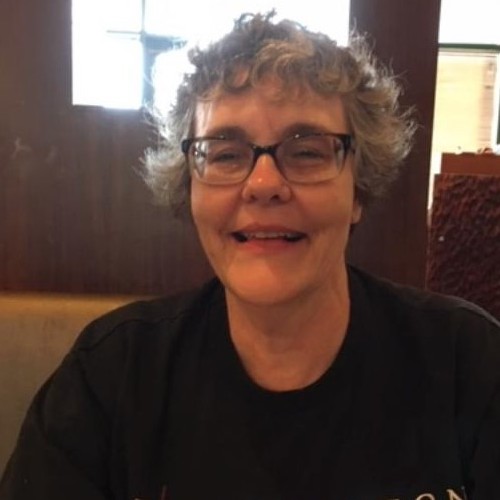 “It’s not all about you” is a phrase used to de-center someone’s narrative. In today’s pericope the female slave who repeatedly proclaims who Paul and Silas are is ultimately dropped from the narrative. Her name is never given. Her role is often forgotten. Yet this frequently-excluded story sets in motion the better-known catch-and-release imprisonment tale of Paul and Silas.

That part of the story is set in motion when Paul casts the spirit of divination from the slave girl. Some exegetes call this a healing. Some speak of Paul and Silas being endangered by the slave’s proclamation. But the text says neither.

After this exorcism, the slave ceases to be of use to her masters or to the story. Her role is not even elucidated in court. Instead, her masters claim Paul and Silas are disturbing the peace. They accuse Paul and Silas of pushing Jewish customs onto the Romans.

There is no follow-through and no follow-up regarding the slave. We do not know if she thinks of herself as healed. If she becomes a follower of the Way. If her masters cast her out. If she is beaten. If she is sold. If she is starved. If she is forced into prostitution to make up for her lost income.

Beyond our pericope, we find that Paul and Silas are even Roman citizens (verse 38). They are part of the majority culture, of the powers-that-be. This focus on majority males at the expense of a minority female happens over and over again.

How many heart health studies were done on men before anyone thought to try them on women? Why was I forty years old before I understood that I was not only female (on the side of the oppressed) but white (reaping an advantage from that reality)?

What if Paul and Silas have their whole ministry upended? What if the center of their story needs to be de-centered? What if those pushed offstage should play the leading role? What if Luke’s gospel is true (chapter 15) and the life of one female slave is as valuable as a lost lamb? Or a lost coin? Or a lost son?

Have you ever told someone of your woes only to have them elbow you out of center stage? They say, “That’s nothing. You should see my (fill in the blank).”

Sometimes listeners justify butting into someone else’s story by saying, “I know just how you feel.” Do they really? The first-person narrative belongs to the storyteller. Listeners should keep their hands off, instead of grabbing the story and retrofitting it to apply to themselves.

I know a family whose child underwent the surgical transition from male to female. One of their friends asked, “How could s/he do this to you?” But the decision had nothing to do with the parents. Instead, it had to do with the child’s own self and that child’s well-being.

Years later, the child went through a period of isolating herself from her family. It would be easy for the family to center themselves. To focus on their pain. To reject the rejection. To want to be the most important part of the story. But maybe their daughter was working toward starring in her own show. Maybe what was going on with her was about what was going on with her.

Making room for others can be hard work. We forget that the story isn’t all about us. We act as if there are no other characters. We neglect the other plotlines. We refuse to permit any other narrators. But God’s story gives us each a starring role. God follows all—and each—of the characters. God honors all the plotlines. God lets each of us share in the narration.

Why do we think God’s work today can be encapsulated by a single narrative? By a single person? Or a single community? Or race, nation, continent or hemisphere?

Some political action groups are reaching out across the political spectrum to listen. To allow people who have been at the margins to take the center. To de-center ourselves. To correct our hampered vision by seeing through someone else’s eyes.

“It’s not about you” is a two-edged sword by which God de-centers us and our experiences. God reminds us that we aren’t the only people in the world. Our point of view is not the only one. Others are not here to serve as extras for our big scenes.

So let the slave tell her own story, instead of just being a prop for Paul’s story. Find the lost lamb, the lost coin, the lost child. Listen. And learn.

Paul and Silas worshiped you, even when they were flogged and imprisoned. Transform our hearts so that we may also rejoice in you at all times and in all situations. Amen.

Blest are they, William Beckstrand

What if those pushed offstage should play the leading role?
Print All Text Print All Commentary