Parables of the Kingdom

After hearing the parable of the Sower, Jesus’ disciples ask him why he speaks in parables. 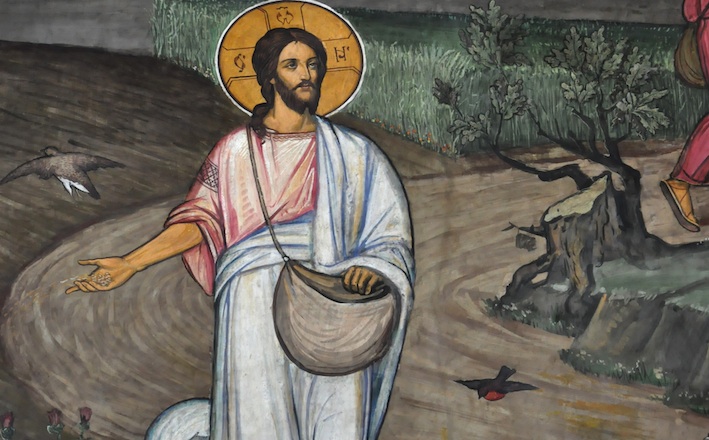 Sower went out to sow, from Art in the Christian Tradition, a project of the Vanderbilt Divinity Library, Nashville, Tenn.
February 17, 2019

After hearing the parable of the Sower, Jesus’ disciples ask him why he speaks in parables.

His striking reply is not often taken very seriously in the church today. Citing God’s call of Isaiah (Isaiah 5) as his model, Jesus effectively says he speaks in parables in order to reveal the “mystery” to some and hide it from others (13:10-17). We should, then, be surprised neither that the parables reveal and intensify the divisions Jesus’ ministry has already begun to generate, nor that the parables that follow in this portion of the discourse persistently point both to judgment and redemption, often using ambivalent images that can be read both ways.

Whereas we usually treat judgment and deliverance as exclusive alternatives, Jesus, like the prophets before him, holds them together. Whether Jesus’ audience hears the parables as depictions of deliverance or threat depends, therefore, on whether they are wealthy landowners, members of the crowd, scribes or Pharisees, or disciples. It’s still true today: where we stand in relation to God’s rule determines what we see, hear, and understand.

In the parable of the weeds and wheat, an “enemy” comes when everyone is sleeping and sows “darnel.” For the disciples, the enemy could be Judean rulers or other opponents of Jesus who, threatened by the good seed he sows, attempt to spoil his harvest. For the ruling class, the enemy might be Jesus himself, plundering the “strong man’s house” (see 12:29).

Taking their cue from Jesus’ allegorical explanation (13:36-43), which is directed to his disciples (and thus not necessarily what everyone else would or should see in the parable), Christian interpreters have typically read the story as an allegorical warning to the church, which, like the field with good and bad seeds, is a mixed body that includes both saints and sinners. Members of the church are not to judge one another, but to wait for God’s angels to sort the good from the bad at the final judgment. The farmer’s strange practice of allowing the wheat and weeds to grow up together is understood as a symbol of God’s patience. These appropriations of the story often appeal to preachers, but also miss some important dynamics.

In popular Jewish tradition, wheat, or even the field itself, would typically represent Israel, while weeds represent the nations. For Jesus’ first hearers, then, the parable would depict God’s judgment of the Gentiles (weeds) and the redemption of Israel (the field of wheat). Jesus’ allegorical reading for the disciples (13:36-43) turns the parable in a surprising direction, in which the field is not Israel (nor the church), but the “world,” and the primary distinction is not between Israel and the nations, but evildoers and the righteous. Here, judgment and salvation may fall on Israel and the nations alike.

The story of the mustard seed (13:31-32) is similarly ambiguous. Mustard was common along the shore of the Sea of Galilee. It was a useful plant, but also regarded as an invasive, tenacious threat that could take over a garden. And here it is completely out of control, becoming a huge tree — an image likely as strange to ancient audiences as it is for us. Does the mustard seed represent something positive, such as faith (see 17:20), or is it an invasive, contaminating force?

Again, the answer depends on where you stand. The image of birds building nests in the branches of mighty mustard trees (13:31-32) offers another twist and still more uncertainty. In prophetic traditions, the great tree in which birds make a home is associated with the judgment of arrogant powers that enslave and oppress Israel (Ezekiel 31, Daniel 4:12-14), but also serves as a symbol of God’s restoration of Israel (Ezekiel 17:22-24).

Why does Jesus replace the metaphor of the mighty cedar tree, a symbol of power, arrogance, and empire, with the invasive mustard plant, a weed? Would the crowds have understood the mustard seed to be like Jack’s beanstalk, reaching, against all expectation, up to heaven and bringing the nations — or possibly Israel’s leaders — low? Whether you see the advent of this heavenly order as a good thing or as an invasive threat that must be eradicated depends on who you are and where you stand.

The woman who “hides” or “conceals” leaven (Matthew 13:33) in the flour provides yet another ambiguous image. Leaven is essential for making bread, but Jewish households are required to remove it from their houses during Passover, when they eat only unleavened bread (Exodus 12:14-20, 23:18, 34:25, Leviticus 2:11). Jesus will warn his disciples that the corrupting teaching of the Pharisees is “leaven” (16:6, 11-12). Is the leaven, then, an invisible agent of transformation or an invasive, corrupting power?

The woman hides the leaven in three measures of flour (about 40 lbs.), which corresponds to what 1) Sarah baked for Abraham’s three heavenly visitors (Genesis 18:6), 2) Gideon used in preparation for an angel of God (Judges 6:19), and 3) Hannah used in her offering for Samuel’s presentation in the temple (1 Samuel 1:24). In each case this amount of bread is associated with divine visitation. Perhaps the woman is also preparing for God’s visitation.

These three parables force hearers grapple with ambivalent signs. Apparently, the coming reign of God is good news for some, but not for others. It brings both judgment and salvation. Limiting the meaning of these parables to but one of these valences robs them of their power to evoke alternatives and compel choice. Jesus himself is like these parables.

As the three parables come to an end, Matthew addresses a brief aside to those listening to the Gospel (13:34-35): the parables, literally, “belch,” “bellow,” or “roar” here-to-fore hidden secrets, fulfilling Psalm 78:2. The Psalm recounts the long history of the people’s persistent forgetfulness, stubbornness, and rebellion, and of God’s persistent response. Even the fulfillment quotation, in other words, reminds the audience of the foundational issues of the parable discourse: God meets the blindness and faithlessness of God’s people with both judgment and mercy.

Lord of stories, Jesus taught us through stories and the wisdom of the shared word. Teach us through your stories, that we may learn, grow, and love. For the sake of Jesus Christ we pray. Amen

How Lovely Is Thy Dwelling-Place, Don Michael Dicie

After hearing the parable of the Sower, Jesus’ disciples ask him why he speaks in parables.
Print All Text Print All Commentary

NL Podcast 349: Parables of the Kingdom