Sometimes it is illuminating to read backwards. 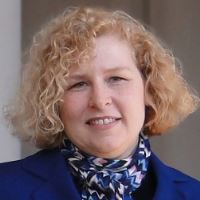 Sometimes it is illuminating to read backwards.

This section of the gospel of Mark ends with an argument about fasting. Before that, skeptics raise two big questions: Who is Jesus to declare sins are forgiven, something only God can do? and why does he break bread with the traitors and law-breakers? When we get to the fasting conflict, the skeptics address Jesus directly: “Why do John’s disciples and the disciples of the Pharisees fast, but your disciples do not?”

In response to each question Jesus has things to say, clever things, mysterious things. But none as cryptic as the three micro-parables Jesus lays down when asked about fasting. Instead of responding directly, Jesus first invites his inquisitors into a thought-experiment: Nobody fasts at a wedding, right? Not while the bridegroom is right there. Very inappropriate.

I imagine this would elicit general agreement, then as now. But then things take a strange turn. Apparently this is no ordinary wedding, since at some point in the festivities, the bridegroom is abducted. Then the fasting commences. While we might read this alongside Mark’s audience as a reference to Jesus’ (the Bridegroom’s) arrest, surely it made no sense to the people who asked the question about fasting in the first place. And the two sayings that follow — about clothing repair and winemaking — don’t exactly flow gracefully from the wedding parable.

What the follow-up sayings do make clear is that one of the issues at stake in this dispute is the relationship between the old and the new. The past and the future. Time-honored ways and uncharted territory. But notice: the little parables about the holey cloak and the seasoned wineskin do not make value judgments. They do not suggest that old things are bad and new things are good, and that the bad old things (like, perhaps, the things first century Jews are doing) ought to be scrapped in favor of the shiny new things (like, perhaps, the things that Christians do).

In fact, according to the parable in Mark 2:21, the old cloak is to be repaired. The vintage object is valued. That old wineskin in verse 22 doesn’t sound very exciting, but it, along with the new wine, is to be preserved and not destroyed. Note: the practice of fasting was not rejected out of hand in the bridegroom parable either. It, too, is given its proper time and purpose.

This being the case, it won’t do for a preacher to use these texts as an argument for abandoning traditions or expressions of faith beloved by a particular Christian community as “old wineskins.” Of course, there might be other reasons that a practice or prayer or work of art or congregational song is not faithful or fitting, but that is a different question. The point is this: inherited things are not necessarily bad things just because they are old things, well-used and well-worn. Rather, there is acknowledgment that old ways and new ways can be mutually destructive. How and when they will be brought together entails thought and care.

This concern for the relationship between the old and the new provides an intriguing lens for looking back at the story that opens this section of Mark: the forgiveness and healing of the paralytic in Mark 2:1–12. The story is full of treasures, but there is one intriguing detail that can be easily missed: the paralytic’s mat. His bedroll. His stretcher. We are told the man is laying on it, that this mat is lowered down through the roof. That bed roll is the thing that bears the man to Jesus. And then there is the way Jesus specifically includes it in the question he poses to the scribes in verse 9. He doesn’t just ask if it is easier to tell the man his sins are forgiven or to “stand up and walk.” No, it is “stand up and take your mat and walk.” The mat is somehow, oddly, right there. Then, of course, Jesus does tell the man to “stand up, take your mat, and go to your home.” And finally Mark writes that the paralytic did just that, immediately, taking his mat with him (verse 12). That bed roll gets a lot of airtime in this handful of verses.

It seems like a strange thing to tell a healed person to do: be sure and take your sickbed with you, thank you. Why on earth would this healed person want that particular souvenir? It would be like finally getting your cast off and then insisting on lugging that overripe shell home from the doctor’s office with you.

Why does Mark name this detail? Maybe it is just a way of showing that the paralytic is so healed that he cannot only walk but he can also pick stuff up. Or maybe it is just the recognition that this man will still need something to sleep on now that he is mobile again. Or maybe it’s pragmatic: it’s a crowded room, we need the space, get that thing out of here.

But maybe there is more to it than that. Presumably the paralytic’s life would never be the same after that day when he heard the music of forgiveness and stood on his own two feet. He was carried in at the beginning of the story, but now he carries, and carries on. The old life is gone and a new life has begun, sure. But take your mat with you, Jesus says. Does he mean: don’t forget where you came from? Does he mean: bring your testimony with you? Perhaps this is also about the old and the new, the past and the future, somehow, thoughtfully, related.

Of course, now it’s stories like this one from the Gospel of Mark that are old. Preached so many times. Like a threadbare cloak, an old wineskin, a well-used bedroll. And yet, full of possibility.

Lord of forgiveness, you healed a paralytic by forgiving his sins. Forgive us, heal us, and teach us to walk in your ways. Amen.

My song shall be alway, Gerald Near

Sometimes it is illuminating to read backwards.
Print All Text Print All Commentary