A moment of commission 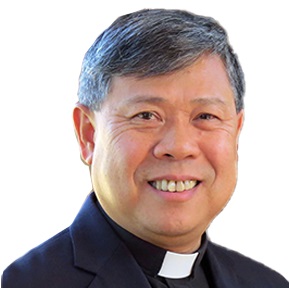 Matthew’s genealogy (1:1-17) shows Jesus can be linked to David the king and Abraham the patriarch, so he was qualified to be a Messiah (1:1, 17) who was believed to be coming from the house of David based on God’s covenant with David announced by Nathan’s oracle (2 Samuel 7:16). This title is reinforced by the visit of the magi from the East to adore baby Jesus as the “king of the Jews” (2:2). But Jesus is not simply one of the messiahs or kings of the Jews, because Joseph’s conversation with the angel regarding Mary’s pregnancy in a dream (1:18-25) indicates that Jesus was conceived by the Holy Spirit, born of the virgin Mary, and adopted by Joseph as commanded by God, all of which suggest that Jesus is no ordinary child but a divine Son of God (see Peter’s confession to Jesus in 16:16; see also Mark 8:29).

The lectionary text today––Jesus’ baptism in the Jordan River (3:1-17)––further reveals Jesus’ identity as the “beloved Son of God,” this time displayed with the spectacular descending of God’s Spirit on him like a dove and declared by the stunning voice of God from heaven (3:16-17), as witnessed by John the Baptist, a revered prophet of God who preached the coming of the kingdom of God. This is a moment of theophany. Just as Jesus’ birth by Mary fulfills the prophecy of Isaiah 7:14 and 9:6-7 regarding a virgin or young woman giving birth to serve as a sign of great hope that signals God’s imminent salvation for God’s people, Jesus’ baptism by John fulfills another prophecy of Isaiah 42:1 that attests to Jesus’ identity as the beloved Son of God who has the authority and is now in the world to fulfill the promise of God’s salvation for God’s people. Declared to be the Son of God and gifted with the Spirit, Jesus’ mission for the kingdom of God is now set to start. So, this is also a moment of commission to teach, proclaim, and heal.

After baptism, Jesus was led by the Spirit to the wilderness to fast and pray. When he was hungry and weary, the devil took the opportunity to tempt him (4:1-11). The devil knew that Jesus was the Son of God but wanted to trick him into asserting his own divine privilege and thereby dishonoring God, so he asked Jesus: “If you are the Son of God, command these stones to become the loaves of bread” and “If you are the Son of God, throw yourself down” (4:3, 6). As a tempter, the devil takes advantage of every occasion and utilizes every means to mislead the Son of God and all children of God away from God and God’s will. The devil is as sneaky as the snake in the Garden of Eden that tried to tempt Eve and Adam into distrust and disobedience to God. But Jesus the Son of God honored God and outsmarted the devil with the words of God (4:4, 7, 10).

Jesus’ baptism is a theophanic moment for both John and Jesus, revelation for John and confirmation for Jesus. Jesus’ identity as the Son of God was now confirmed by God the Spirit and God the Father. The trinitarian God works in communion to embark the Son’s earthly mission of salvation for all the world. This narrative also reminds Jesus’ followers that their baptism is a blessed occasion of God’s revelation, God’s grace, and God’s acceptance of them as children, and it sets a new course for their lives to love and serve God’s people as Jesus has done.

One reason Jesus asked for John’s baptism might simply be to show that Jesus affirmed John’s prophetic preaching of repentance in response to the forthcoming judgment of God. Jesus wanted to support John’s eschatological message and may wish to join John’s revival movement.

Some details in Matthew’s narrative raise two further questions and suggest some answers. First, Jesus has been presented as the Messiah and the Son of God. Why did he ask John, who is a herald of God’s kingdom, to baptize him? This has to do with the issue of status and humility. The narrative tells the reader that John initially declined to baptize Jesus because he recognized Jesus as the one greater than he was (3:11, 14). In honor of Jesus’ high status, John finally baptized Jesus only at Jesus’ command. John’s deference and obedience to Jesus demonstrate his humility before the one who has a higher status. John did not allow his popularity as a prophet to puff himself up. By asking John to baptize him, Jesus also demonstrated a virtue of humility. Even though he is the Son of God, Jesus did not exploit the privilege of his divine status but humbled himself asking John to baptize him and thereby serving as an example of humility. This is the same message about the mind of Christ in the well-known early Christian Kenosis Hymn that Paul cites in Philippians 2:6-10.

Second, John’s baptism is a ritual to repent of one’s life of sins and seek changes (3:6). By asking to be baptized in such a ritual, did Jesus acknowledge that he had committed sins that needed to be repented of? If so, how does it reconcile with the Christian claim that Jesus is the righteous one who died to redeem the sinful (1 Corinthians 1:30; 2 Corinthians 5:21; 1 John 2:1-2)? To this question, Jesus’ reason for John to do so explains well, “Let it be so now, for it is proper for us in this way to fulfill all righteousness” (3:15). Jesus’ baptism is done for that moment of time in his mission, in other words, for a special purpose not the same as others who received John’s baptism to confess their sins.

It is also a proper way to show how righteousness is to be fulfilled. For Jesus and for Matthew, the righteousness of God is a gift from God that requires believers’ commitment to hunger and thirst for it (5:6, 10), to practice (5:20), to seek (6:33), and to bear its fruit (3:8; 21:43). In other words, Jesus is showing his followers how they should take seriously the ritual of baptism, the life of repentance, and the pursuit of righteousness as he did through his humble baptism by John in the Jordan, and in his whole life. He asked for John’s baptism to make this point and set an example for his disciples.

Christ, when for us you were baptized ELW 304
Crashing waters at creation ELW 455
Earth and all stars ELW 731

The Baptism of Christ, Peter Hallock

A moment of commission
Print All Text Print All Commentary