Matthew’s genesis, or origin account, of the Christ shares a family history that might seem monotonous at a glance. 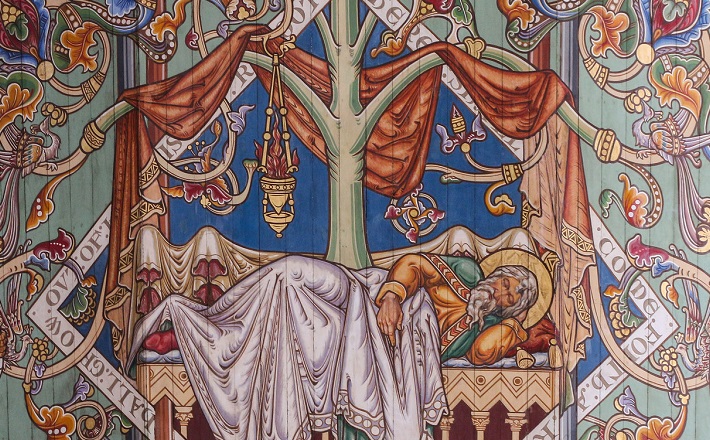 Matthew’s genesis, or origin account, of the Christ shares a family history that might seem monotonous at a glance.

Moreover, at face value, the opening genealogy is a fiction. Jesus shares no biological relationship to Joseph and the 14 generations that preceded him. Patient preachers, however, will see in Matthew’s family tree a chronological reasoning that establishes Jewish roots for Jesus. It offers a telescopic view of God’s enduring redemptive work among the people of God.

On the one hand, David came to fame by comforting Saul with a lyre and slaying Goliath with a slung stone in 1 Samuel 16:23; 17:50. On the other hand, in 2 Samuel 11:17 he killed Uriah, an innocent soldier fighting to protect his empire, so that he could cover up a baby conceived through his philandering with Bathsheba, the wife of Uriah. That baby would eventually die.

Later, David refused to punish another son, Amnon, by his wife Ahinoam, even though he had raped his half-sister Tamar (2 Samuel 13:21). In a cruel twist of fate, David’s warriors killed Tamar’s brother Absalom after he murdered Amnon to avenge his sister and sought to dethrone his father David. Absalom and Tamar were, by the way, children from Maacah yet another mother and wife of David.

Jesus is also a son of David according to Matthew. Appealing to the narrative lectionary, one might consider Jesus to be an embodiment of Psalm 132:11-12: “The Lord swore to David a sure oath from which he will not turn back: ‘One of the sons of your body I will set on your throne. If your sons keep my covenant and my decrees that I shall teach them, their sons also, forevermore, shall sit on your throne.’”

If so, the messiahship of Jesus belongs to a household of melodious healing, youthful courage, abusive imperial power, murder, incest, and fratricide. David and his sons spectacularly veered from keeping covenant and decrees as the psalmist described. Nevertheless, God’s redemption absorbs despicable histories like these, and Jesus is kin to those who need his forgiveness most.

Or consider Abraham, an elderly warrior first known as Abram, and perhaps a dirty old man. He impregnated a slave-girl named Hagar at the age of 86 (Genesis 16:15-16). He conceived with his wife Sarah — formerly known as Sarai — when they were 99 and 90 years old respectively (Genesis 17:1, 17). The latter pregnancy happened after Abraham pretended that his wife was his sister (Genesis 20:2-3). When their child Isaac became a boy, Abraham nearly immolated him to prove his obedience to God (Genesis 22:2).

Abraham’s grandson Jacob swindled his birthright by exploiting his brother Esau and stole Esau’s blessing with help from his deceptive mother (Genesis 25:29-34; 27). On a later occasion, and after marrying two sisters (Genesis 29), Jacob strong-armed God to receive a blessing yet again (Genesis 32:22-32). Matthew’s opening verses seem full of slimy behavior from characters who seem irreconcilable as relatives of Jesus. And yet, the Gospel of Matthew names precisely those figures who do the darndest things as family to Jesus.

By digging deeper into Matthew’s genealogy and learning about these people and their stories, we as preachers can grow in the compassionate use of our gospel claims and become more welcoming in our sermons with assemblies who listen to our proclamations, assemblies that include more than a few folks with lives as textured or colorful as the biblical characters from the opening chapter of Matthew.

Learning that the forebears of Jesus are promiscuous liars, bullies, and thieves can help us reconfigure how we preach about inclusion in the family of God and whom we judge to be sinful in the eyes of God. By the way, none of the figures listed here are identified as sinners. They are, however, named as belonging to the lineage of Jesus.

In Matthew 1:12, Zerubbabel, “the signet ring,” an embodied sign of God’s fidelity to Judah, showed himself xenophobic when an opportunity arose to reconcile with enemies in rebuilding a house to God and engaging in what might be described as interreligious dialogue today (Haggai 2:23; Ezra 4:1-3).

For every Asaph (Matthew 1:7) who has beautiful verses from the Psalms attributed to him: “Whom have I in heaven but you? And there is nothing on earth that I desire other than you. My flesh and my heart may fail, but God is the strength of my heart and my portion forever” (Psalm 73:25-26) and Josiah (Matthew 1:11), with “no king like him, who turned to the Lord with all his heart, with all his soul, and with all his might, according to all the law of Moses; nor did any like him arise after him” (2 Kings 23:25), there are many more imperfect and seemingly immoral descendants of Jesus. So, as we approach a new year, we can rejoice at the full range of Jesus’s family from every age.

Holy Parent, you blessed Jesus with a rich line of diverse and interesting ancestors. Bless our families; those related by blood and those brought to us by love. For the sake of Jesus Christ we pray. Amen.

Assistant Professor of Worship and Preaching

Matthew’s genesis, or origin account, of the Christ shares a family history that might seem monotonous at a glance.
Print All Text Print All Commentary