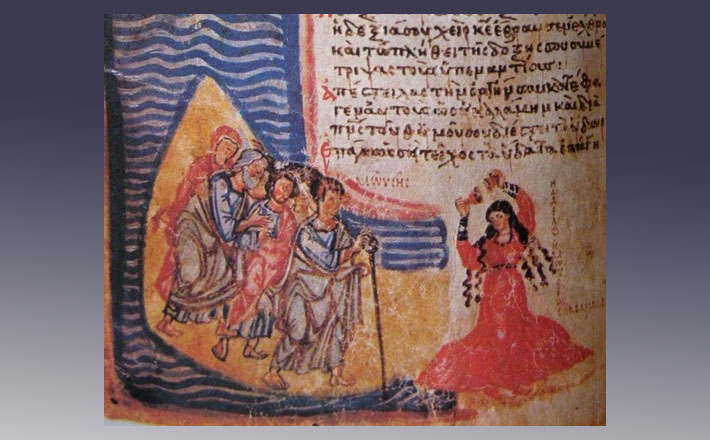 Crossing of the Red Sea and Miriam Dancing and Singing, from  Art in the Christian Tradition, a project of the Vanderbilt Divinity Library, Nashville, Tenn. Original source.
March 26, 2016

[Looking for commentary on John 20:1-18? See this Easter Sunday commentary by Barbara Lundblad.]

We have an untold number of women — three who are named — experiencing an event beyond normal human comprehension and their testimony being dismissed by men, who seem to fall into the same old pattern that attended ancient male-dominated societies. The two verses that stand in conflict are Luke 24:8-9, “Then they remembered his words, and returning from the tomb, they told all this to the eleven and to all the rest,” and 24:11, “But these words seemed to them an idle tale, and they did not believe them.”

Human history is rife with such overt discrimination. Less than a century ago, women and people of color were not considered credible witnesses in American courts. The history of civil rights in the United States is replete with examples of women and men whose truthfulness was discounted or disregarded because an accident of birth made them something other than white men. In short, certain people throughout history, simply because of gender or ethnicity, have been branded deceitful and lacking in credibility for no other reason than prevailing social prejudices. As St. Augustine says in one of his sermons, “Truth became like an idle tale.”

Augustine deals most directly with this problem of social credibility in his preaching on Luke 24:

Just as the fall of humankind came through a woman, so now the restoration is first proclaimed by women. News of Jesus’ resurrection seems like nonsense in light of the horror of his death by crucifixion … The women reported this to men. And what’s written? What did you hear? These things seemed in their eyes like an idle tale. How very unhappy is the human condition! When Eve related what the serpent had said, she was listened to straightway. A lying woman was believed, and so we all died. But [the disciples] didn’t believe women telling the truth so that we might live. If women are not to be trusted, why did Adam trust Eve? If women are to be trusted, why did the disciples not trust the holy women?1

Although we must look beyond Augustine’s own underlying prejudices, we can see how the absence of social credibility can blind us, who hear this eyewitness testimony, to the truthfulness of other’s declarations. When people lack social capital, their voices mean little or nothing to the rest of society.

The truth of the resurrection rests on our social capital as agents of God. That is, at the core of the Christian claim is that our God does things that are grand, large, even revolutionary, in the lives of human beings. In fact, it resonates throughout creation. In view of these actions, we are often “perplexed,” as the women were at the empty tomb (Luke 24:4). We are, likewise, “amazed,” as Peter was when he went to the tomb (24:12). The reality of expressing what has happened in our lives — our religious experience — is something that can risk our social credibility. Celsus, a critic of the Christian claim, in his treatise, On True Doctrine, pointed this out a long time ago when he wrote, “Were [Jesus] a god he should not have died, if only in order to convince others for good and all that he was no liar; but die he did — not only that, but died a death that can hardly be accounted an example to men.2 The death of Jesus is counterintuitive to the expectations of human beings, who believe that only power and conquest can influence people to see the veracity of one’s testimony.

Like the women at the tomb, when we proclaim the powerful experience of the resurrection, we put ourselves in a precarious situation. Our claim may be questioned, but the deeds that flow from our claim provide the support — even the infrastructure — for the truthfulness of what has happened in our lives. The resurrection of Jesus is as perplexing and mysterious to us as it was to those women on that Sunday morning. Nevertheless, they did not let uncertainty rule their lives. They shared the brilliance of their experience with others, even those who did not believe them. And their testimony, even though it did not convince the entire group, did influence one of Jesus’ followers to examine the claim for himself. The lesson in this case may be that revelation, even an outrageous one, cannot erase entirely the unhealthy social patterns that predominate human existence.

Leo the Great, in reading this text, even found something redemptive in the doubt expressed by the eleven. He said, “The Spirit of truth would by no means have permitted this hesitation, wavering in human weakness, to enter the hearts of his preachers, if their trembling anxiety and questioning delay were not to have established the foundation of our faith … Let us give thanks for the divine plan and the necessary ‘slowness’ of the holy fathers. They ‘doubted’ so that we need not doubt.”3

Ezekiel is not a very pleasant text.

In this well-known passage from the book of Ezekiel, the prophet speaks over a field littered with dry bones, and the dead are resurrected.