The king may not know whom he saw, but he has a change of heart 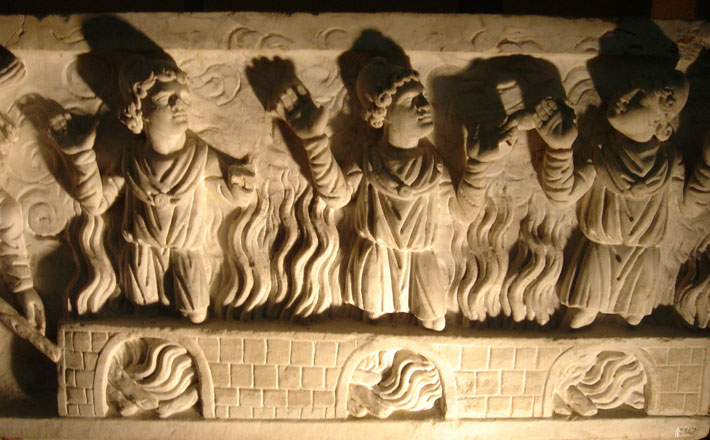 Three Youths in the Fiery Furnace, from Art in the Christian Tradition, a project of the Vanderbilt Divinity Library, Nashville, Tenn.
April 16, 2022

What a sight it must have been! Grand enough to be an attraction of the empire, a gargantuan statue is on display. The towering, massive simulacrum of royal majesty is sixty by six cubits—about ninety by nine feet. The cubit ancient unit of measurement is the most ingenious invention. Using one cubit as the length from the elbow (Latin cubitum, “elbow”) to the tip of the fingers, one can measure as large an area as one can walk about and count. The proportion of the width and height of the statue would have provided the spectators with an impression that it is piercing into the sky. Gold in color, it would dazzle from near and far under the ray of the celestial luminaries.

In the immediate context of the story of Daniel, the statue flaunts the splendor of the empire. In the larger context of the book of Daniel, the statue reminds the readers and audience of the dream Nebuchadnezzar had earlier (chapter 2). In the dream, he saw a statue whose body was made of multiple metals. The head was gold. With the chest and arms in silver, the figure had the bronze middle and thigh, and iron legs were extended to the feet made of mixed elements of iron and clay.

To the king and others, Daniel explained that each body part represented a different period in history. In our chapter, the king has his statue constructed in gold, the metal that represented his reign according to Daniel. Although the story never says the statue is of the king’s own image, apparently, he wants to claim the entire history in his ore and color.

To drive home his glorious reign, King Nebuchadnezzar dispatches an empire-wide call. Come and be awed by the statue! The royal edict goes out to summon everybody that is somebody in the realm. The pomp of the list of the dignitaries (“the satraps, the prefects, and the governors, the counselors, the treasurers, the justices, the magistrates, and all the officials of the provinces,” verses 2, 3) is so grandiose as to make it sound even comical.

The civic event makes three Jewish young people stand out, for they missed the ceremony. Accused of sedition are Shadrach, Meshach, and Abednego, who were appointed to govern in the province of Babylon after Daniel interpreted the king’s dream in chapter 2. Upon receiving the report of seditious Jewish governors, the king goes into a rage, a dangerous situation in the monarchic world.

A royal tribunal is held, and the king charges the young men with two counts of offense, one religious (“you do not serve my gods,” verse 14) and the other political (refusing what the king commanded). In his interrogation, the king repeatedly refers to worshiping the statue as a royal act. Non-obeisance is a challenge to the throne—a treason.

The accused are given one last chance to correct their error. Refusal will result in execution by burning in the furnace. The king underscores that there is no recourse for them. Ironically, the king’s decree of no way out conveys that this is going to be a contest not of political expediency but of theological truth.

The three young men reject the royal offer. They are not interested in getting out of the fix somehow. They present two possible scenarios. First, God can deliver them, making it unnecessary for them to find a way out by surrendering to the idol worship. Second, even if God does not come to their aid, they will not worship the golden statue that the king had built. The two scenarios not only show their commitment to God. They also hint at a time when the faithful faced the martyr’s death without seeing God’s miraculous intervention.

The king’s wrath gets so intensified that his face changes—the Greek text implies that it became beyond recognition. Upon the king’s vengeful charge, the fire of the furnace is stoked seven times hotter than is customary. The king’s furious command overheats the furnace, which becomes too hot to shield the executioners from burning. The three young men, still bound but with no one to throw them into the fire, “fell down . . . into the furnace of blazing fire” (verse 23). Earlier in the story, the idol worshippers fell down to worship the statue. Now the faithful “fell down” into the fire, for they have chosen death over disloyalty to God.

While the king must have imagined an immediate incineration, the king is shocked to see the young men unbound and walking around in the fire—not alone but with the fourth figure that appeared to be a divine being (see also “a son of the gods” in Aramaic; verse 25 note). In the Christian reception history, the fourth person is often identified with Jesus Christ, albeit anachronistically, but Jerome objects that the vision of the Son of God could not have been granted to the impious Babylonian king.2 The king may not know whom he saw, but he has a change of heart. The three young men are rescued unscathed.

The immediate upshot of the story is that the event has made a believer out of Nebuchadnezzar, who praises the God of Shadrach, Meshach, and Abednego, for God saved them “who trusted in him” (verse 28). The king issues another edict that supersedes the earlier one, interdicting irreverence against the God of Shadrach, Meshach, and Abednego, at the pain of horrible death and the desolation of the offender’s base of life. Even in the middle of reporting the king’s conversion, the storyteller astutely includes a note about royal violence and cruelty. Some may question whether the time of Antiochus IV could have been the historical background since the royal figure seems benevolent, but a close look reveals both the whim and cruelty of the regime. In Daniel 3, the political climate does not shape the commitment of the faithful. Albeit obliquely, the lectionary selection for today echoes this, leaving out their political promotion reported in the last verse of the chapter (verse 30). Their faith is shaped neither by peril nor by political comity.

This is a familiar story; the next generation deserves to hear it

While we are standing in those shallow waters, tending to our judgments, forgetting God’s mercy, God calls us

The king may not know whom he saw, but he has a change of heart
Print All Text Print All Commentary