The Pharisees shy away, because they know 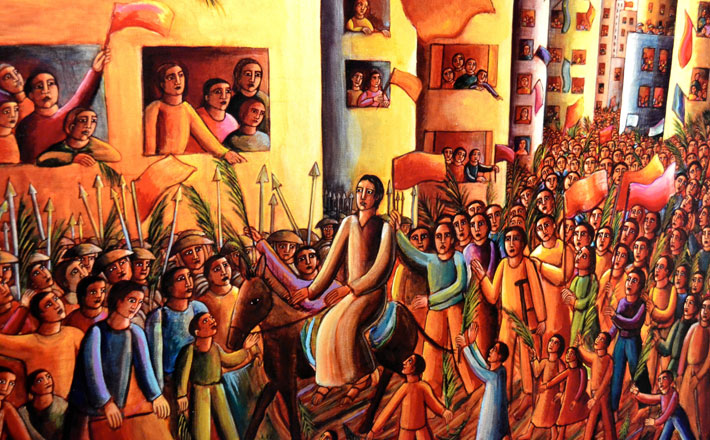 This reading is designated for “Palm” Sunday.

But I feel the need to draw our attention to the elephant in the proverbial room: there are no palm branches in Luke’s Gospel. None. Not a single leaf is mentioned.

In fact, were we to compare the four Gospels and what each of them has to say—which I have done for you here so that you don’t have to, because that’s just the kind of guy I am—we might be surprised to learn that palm branches are mentioned only once:

If you think about it, there are more cloaks than palms in these stories; why don’t we call it “Cloak Sunday,” or “Coat Sunday”? Maybe we could get Burlington to sponsor it…

Each of the Gospels tells the Palm Sunday story a little differently, but there are two things that each Gospel gets the same:

We’ll start with the psalm.

As Jesus enters Jerusalem, toward which his face has been set since he came down from the mountain of his transfiguration—the crowds welcome Jesus, using Psalm 118, especially verse 26.

Matthew 21:8-9: “Hosanna to the Son of David! Blessed is the one who comes in the name of the Lord! Hosanna in the highest heaven!”

Luke 19:36-38: “Blessed is the king who comes in the name of the Lord! Peace in heaven, and glory in the highest heaven!”

The invitation is to let the moment catch you up:

And then some of the Pharisees want them—want us—to stop singing that psalm.

“Some of the Pharisees in the crowd said to [Jesus], ‘Teacher, order your disciples to stop.’”

Why? Is it to stop Jesus in his tracks? Are these the ones who will, in due time, seek his life? Another example of the wretched Pharisees not recognizing the visitation of their God?

Perhaps. But perhaps they speak because they know exactly what is going on. They understand. Because, back to our first point, Jesus rides into town on a young donkey.

This is what Israel’s kings did; it was how they arrived. This is a political act. This isn’t the opposite of human expectations of a king. This is exactly what the people were expecting and waiting for.

In this setting, the two—politics and theology—are inseparable…and so, the Pharisees shy away; because they know.

This is a theological act. Jesus is declaring himself: the long-expected king, promised by the prophet, is come. This is what Palm Sunday proclaims.

Zechariah 9:9
Rejoice greatly, O daughter Zion! Shout aloud, O daughter Jerusalem! Lo, your king comes to you; triumphant and victorious is he, humble and riding on a donkey, on a colt, the foal of a donkey.

Luke 19:36-38
As he rode along, people kept spreading their cloaks on the road. As he was now approaching the path down from the Mount of Olives, the whole multitude of the disciples began to praise God joyfully with a loud voice for all the deeds of power that they had seen, saying, “Blessed is the king who comes in the name of the Lord! Peace in heaven, and glory in the highest heaven!”

Zechariah 9:10-12
He will cut off the chariot from Ephraim and the war-horse from Jerusalem; and the battle bow shall be cut off, and he shall command peace to the nations; his dominion shall be from sea to sea, and from the River to the ends of the earth. As for you also, because of the blood of my covenant with you, I will set your prisoners free from the waterless pit. Return to your stronghold, O prisoners of hope; today I declare that I will restore to you double.

Luke 9:41-44
But as Jesus came near and saw the city, he wept over it, saying, “If you, even you, had only recognized on this day the things that make for peace! But now they are hidden from your eyes. Indeed, the days will come upon you, when your enemies will set up ramparts around you and surround you, and hem you in on every side. They will crush you to the ground, you and your children within you, and they will not leave within you one stone upon another; because you did not recognize the time of your visitation from God.”

While he was still speaking, suddenly a crowd came, and the one called Judas, one of the twelve, was leading them. He approached Jesus to kiss him; but Jesus said to him, “Judas, is it with a kiss that you are betraying the Son of Man?”

Now the men who were holding Jesus began to mock him and beat him; they also blindfolded him and kept asking him, “Prophesy! Who is it that struck you?” They kept heaping many other insults on him.

When they came to the place that is called The Skull, they crucified Jesus there with the criminals, one on his right and one on his left.

And the people stood by, watching; but the leaders scoffed at him, saying, “He saved others; let him save himself if he is the Messiah of God, his chosen one!” The soldiers also mocked him…saying, “If you are the King of the Jews, save yourself!” There was also an inscription over him, “This is the King of the Jews.”

Zechariah 9:16-17
On that day the Lord their God will save them for they are the flock of his people; for like the jewels of a crown they shall shine on his land. For what goodness and beauty are his! Grain shall make the young men flourish, and new wine the young women.

[for] the Lord Jesus, on the night when he was betrayed took a loaf of bread, and when he had given thanks, he broke it and said, “This is my body that is for you. Do this in remembrance of me.” In the same way he took the cup also, after supper, saying, “This cup is the new covenant in my blood. Do this, as often as you drink it, in remembrance of me.” For as often as you eat this bread and drink the cup, you proclaim the Lord’s death until he comes.

And so the preacher proclaims as well, “Blessed is the one who comes in the name of the Lord!”

Hosanna, King,
Blessed are you, our king, who comes in the name of the Lord! Peace in heaven, and glory in the highest heaven! Even if our voices were silenced, creation itself would rise up to praise you! Hosanna in the Highest! Amen.

The Pharisees shy away, because they know
Print All Text Print All Commentary