The narrative account in Isaiah 36-37 is permeated with brute power and force. 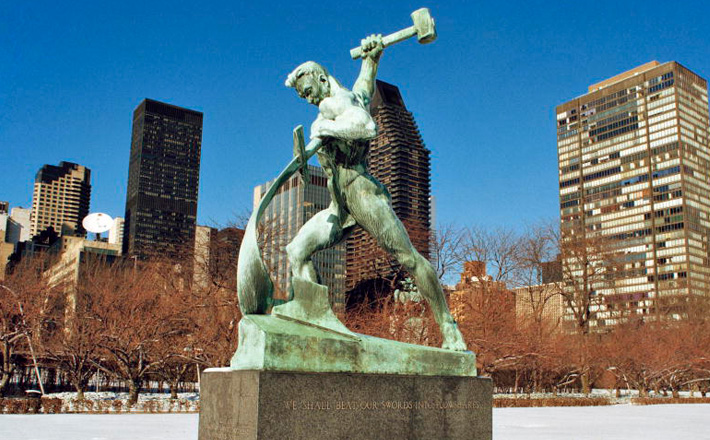 The narrative account in Isaiah 36-37 is permeated with brute power and force.

In the context of the imperial invasion of King Sennacherib of Assyria who swept through the countryside and attacked one city after another, the king sends his emissary together with a great army to Jerusalem to go and meet with Hezekiah, the king of Jerusalem. Hezekiah in turn sends his own officials to meet with this imperial delegation. In the language of the Judeans, the Assyrian Emissary delivers the following message to the people of Judah:

Don’t let the king lead to you to believe that he will be able to save you. Don’t follow your king in trusting in the God of Israel. Forget about all those beautiful, but empty, promises that God will save you. Your God, as also the other gods of your neighboring cities, are useless. Rather, pledge allegiance to the king of Assyria. He promises you a life of peace and prosperity. Who would not want to eat from your own vine and fig tree and drink water from your own cistern? You could do so unhindered under our rule, until the day that we move you to another country, which is precisely like your own, where there also will be grain and wine, bread and vineyards (based upon Isaiah 36:14-20).

The general tone of this speech is an overt display of imperial power with the sole purpose of the message of the Assyrian Emissary to intimidate and to instill fear in the subjects who are encouraged to revolt against their king, forsake their God, and bow before the Emperor. The effect of these attempts to dominate and to control by the representatives of the Empire is quite fierce as evident in the reaction by King Hezekiah who frantically engages in mourning rituals, tearing his cloths, covering himself in sackcloth, most likely weeping and crying, and finding solace in the house of the Lord (Isaiah 37:1). His anguish is particularly clear in the message his officials delivers to the prophet Isaiah that divulges his state of mind: “This day is a day of distress, of rebuke, and of disgrace; children have come to the birth, and there is no strength to bring them forth” (Isaiah 37:3). The only thing this dispirited king can think of in response is this: “Pray for us” (Isaiah 37:4).

Isaiah furthermore promises that God will cause the ferocious emperor to retreat, by instilling a spirit in him so that he shall hear a rumor, and hence return to his own land. The prophet prophesies that this emperor will fall by the sword in his own land, suggesting what we know all too well: “You live by the sword, you die by the sword.”

This narrative account in Isaiah 36-37 is so deeply steeped in violence and war that it almost seems as if the creators of the lectionary could not let the text stand on its own. The lectionary reading for this week thus draws our attention to some other words by the prophet Isaiah in a profound vision of peace found in Isaiah 2:1-5. Amidst the context of war, domination and force that governs the narrative account in Isaiah 36-37, the words of Isaiah 2:1-5 holds up an alternative view. It is a view of a world in which nations do not learn war no more. It is a vision of a world where people are more concerned with cultivating food than producing weapons that then, and so often also now, have wrought so much destruction.

Within this vision, God is no longer the mighty warrior who will fight the other nations, but rather, God is the great teacher of God’s ways, the righteous judge and the arbitrator between nations. By bringing these texts from the book of Isaiah together, the lectionary seems to suggest that it is this vision of God that may be behind the prophet’s words to Hezekiah’s officials to go share with the fearful and despondent king. “Do not be afraid because of all those words you have heard.” In the vision of Isaiah 2:1-5, God is held up as a God who seeks peace and justice, who instead of teaching nations how to make war, teaches them how to live together, how to share resources, how to find non-violent solutions in order to arbitrate disputes.

The purpose of these lessons in peace making and peace keeping is that everyone may live well. This vision moreover serves as a counter claim to the emissary of the Assyrian king whose pretend claims of peace according to which everyone will be sitting under their own fig tree and vineyard, drinking from a cistern of their own, does not last much longer than the next empire entering the scene and with force taking people away into exile. Rather, for the many nations streaming to the Lord’s house, the words of the old gospel song written by Thomas A. Dorsey originally for Mahalia Jackson reflect the heartfelt yearning underlying this week’s lectionary selection:

Well the bear will be gentle
And the wolves will be tame
And the lion shall lay down by the lamb, oh yes
And the beasts from the wild
Shall be lit by a child
And I’ll be changed, changed from this creature that I am, oh yes

There will be peace in the valley for me, some day.

God of deliverance, you promised prosperity and peace to the exiles of Jerusalem. Grant us to prosper, not for riches, but for faith, so that our lives may be a blessing to all. We pray these things in the name of Jesus Christ, our Savior and Lord. Amen.

The narrative account in Isaiah 36-37 is permeated with brute power and force.
Print All Text Print All Commentary