By this point in the Gospel of Luke, Jesus’ healing powers are well-established. 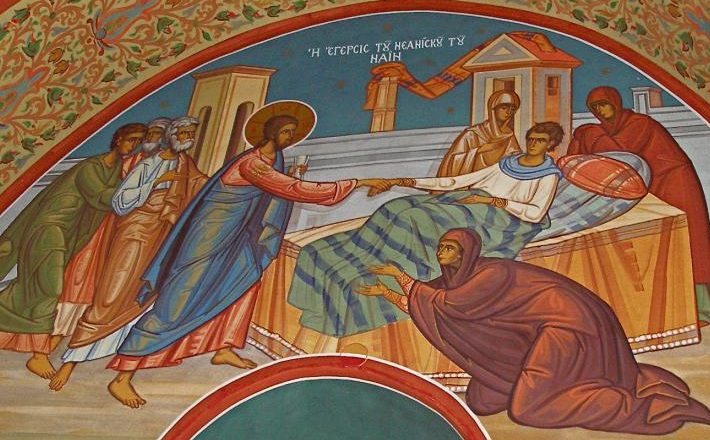 By this point in the Gospel of Luke, Jesus’ healing powers are well-established.

As Jesus enters the town of Nain, a village near Nazareth, he encounters the burial procession of a widow’s only son. Moved by compassion for the woman, Jesus raises the man from the dead, and the story culminates in the news about Jesus spreading throughout Judea.

How does this scene fit into the Gospel narrative as a whole? If we read beyond this week’s Narrative Lectionary passage to next week’s text, the placement of this pericope at this point in the Gospel makes sense. In Luke 7:22, Jesus will tell John the Baptist’s disciples to report back to John that they have seen and heard miraculous signs, including the raising of the dead. Raising the widow’s son at this point in the story turns out to be early corroboration of what he will claim soon thereafter. But we shouldn’t jump too quickly to Jesus’ conversation with John’s disciples; it is worth lingering on Luke’s account of Jesus raising the widow’s son.

First, notice that Jesus is described as having compassion for the woman (Luke 7:13) — a com-passion (literally, “suffering with”) that likely was triggered by empathy for a mother who lost her child, one of the most difficult of all human experiences. Jesus is also aware that having lost her only son and her husband, this widow is now doubly vulnerable. In the patriarchal culture of the first-century Roman Empire, widows were dependent on their sons, brothers, or other male relatives for sustenance.

Jesus’ compassion motivates a miracle. We might contrast this with many other ancient accounts of healing in which the miracle comes about because the supplicant has paid a fee and/or made a ritual sacrifice. It is also worth noting the context in which this compassion arises.

The story depicts a meeting of two processions: one represents life (Jesus, his disciples, and a “large crowd” who have just witnessed and celebrated a miraculous healing), and the other is a procession of death (the widow, her dead son, and the mourning crowd). Compassion arises when life meets death, when hope and suffering come together.

Jesus’ response to this woman’s suffering is not abstract or intellectual; he feels her despair on a visceral level (in fact, the Greek word usually translated “compassion,” splagchnizomai, comes from splagchna, which means “intestines”). This deep, gut-wrenching compassion is what leads Jesus to act on her behalf. We see this pattern elsewhere in Luke, as well.

This is the first of three instances of the actual word “compassion” in Luke (Luke 7:13; 10:33; 15:20). All three depict one person first experiencing another person’s suffering and then acting on that person’s behalf. Here, Jesus raises the widow’s son (Luke 7:13); in the Parable of the Good Samaritan, the Samaritan cares for a robbed and injured man (Luke 10:33); and in the Parable of the Prodigal Son, the father feels compassion for his wayward son and rushes out to welcome him home (Luke 15:20).

Of course, compassion shows up in Luke more often than the specific Greek term does. Throughout the Lukan narrative, Jesus heals, performs exorcisms, and cares for the downtrodden and oppressed (Luke includes women and “the poor” more than any other Gospel). Repeatedly, Jesus is shown enacting the calling from the Isaianic scroll, which he read and declared fulfilled in his first public sermon in Nazareth:

“The Spirit of the Lord is upon me,

because he has anointed me

to bring good news to the poor.

He has sent me to proclaim release to the captives

and recovery of sight to the blind,

to let the oppressed go free,

Catholic priest and spiritual writer Henri Nouwen describes Jesus’ life of compassion as the “path of downward mobility”1 — Jesus chooses pain, rejection, persecution, and death rather than the path of “upward mobility” toward power, authority, influence, and wealth. Jesus did not reach down and lift the poor up from above. He became poor — he suffered with — and according to Luke, Jesus’ crucifixion and resurrection are precisely what enables redemption — indeed, relief from suffering — for all humanity.

Jesus’ “path of downward mobility” differs from the common notion today that compassion means helping “those less fortunate than we are.” It is a particularly privileged American notion to think that if we volunteer in a soup kitchen or donate money to help victims of natural disasters, we have been compassionate.

To be clear, these actions are important and valuable ways of serving others. But when we are able to maintain our distance or stay in a place “above” those we serve, such acts easily become acts of pity, rather than compassion. This is the problem with the idea of serving “those less fortunate”: we are somehow “more” and they are somehow “less.” We still have the power.

Real compassion, as embodied by Jesus, runs counter to our culture’s constant call to succeed, to impress, to be effective. Real compassion is a call to suffer with the powerless. To quote Nouwen again:

Compassion means going directly to those people and places where suffering is most acute and building a home there. God’s compassion is total, absolute, unconditional, without reservation.2

Though the story of Jesus raising the widow’s son is short account, Jesus — importantly — does not rush to action. Luke does not use Mark’s favorite word, “immediately.” Instead, Jesus first shares in the widow’s pain; this is the necessary prerequisite to compassionate action.

Healing Lord,
By your goodness you healed many who were ill, even raising the dead to life. Restore us to new life, healing our hearts, minds, and spirits, so that we may proclaim praise and gratitude for your compassion to all who will hear. In the name of the one who is himself new life, Jesus Christ our savior. Amen.

God’s son has made me free, Edvard Grieg

By this point in the Gospel of Luke, Jesus’ healing powers are well-established.
Print All Text Print All Commentary