Preaching Series on Sacraments (5 of 5)

This is Week 5 of a 5-week preaching series on Sacraments. 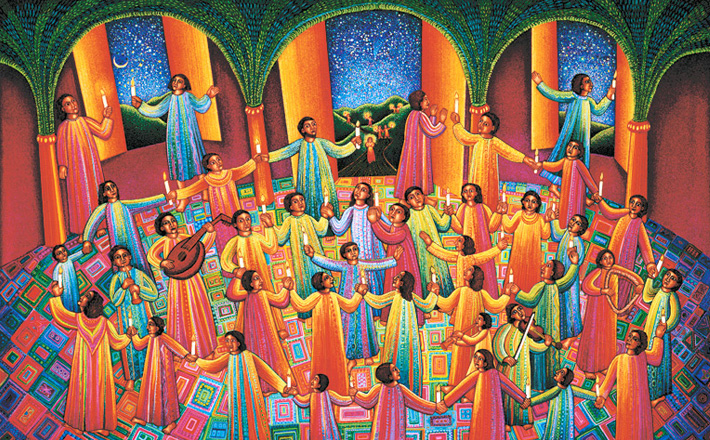 Mutual Conversation and Consolation of the Saints


The Christian faith and life are, first and foremost, about words and their power. From those first words the Creator whispered over the chaotic waters, to the Ten Words handed down to Moses to stand over the chaos of human conduct, to the Word made flesh and the foolishness of its proclamation. All the rest is, in a certain sense, window dressing or accompaniment. As Martin Luther said, “The Word, I say, and only the Word, is the vehicle of God’s grace.”1

Words matter. Words make things happen. Words are the stuff of the life of faith. And so our words, in mutual conversation and consolation.

Luther famously outlines the variety of way in which God delivers the gospel to us, and with it God’s superabundantly gracious deliverance from the power of sin.

In the Smalcald Articles Luther says that there are 4 different ways in which the gospel-word comes to us:

But, paired with the Office of the Keys, through what Luther called the “mutual conversation and consolation of the saints”; this is, caring, calming, comforting, challenging, correcting Christian conversation.

While not a sacrament in the traditional sense, this sort of caring conversation that bears with it God’s Word of grace is certainly sacramental, and we do well to engage in it.

Notice how Jesus would have us deal with sin: not calling it our in social media, not increasing its misery in gossip and complaining, not putting the sinner on blast, but in careful and caring conversation.

Matthew’s Jesus would have us deal with sin—sin committed against us by a fellow believer—in serval simple (even if complicated) steps:

The end result in the spiraling out of the wages of sin may seem to land with us in the terrible situation of someone being cast out of the church. But that is not where the emphasis should lie, as though it were the goal of this conversation. Not at all! In fact, the goal is the very opposite, to name sin and the damage that it does, to speak truth to the situation, and through honest, loving conversation to “regain that one.”

This kind of mutual conversation that is meant to lead to consolation—of both parties—is to be done in the name of Jesus. For where his name is invoked, there he will be also; even in the midst of conflict.

This is Week 5 of a 5-week preaching series on Sacraments.
Print All Text Print All Commentary