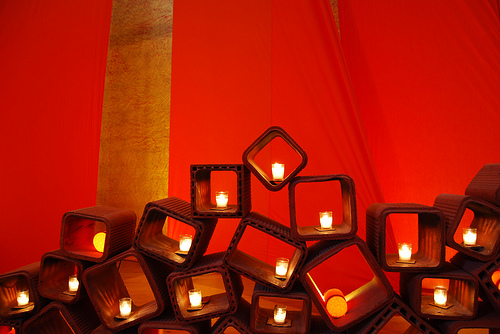 Taizé 2012(Creative Commons image by Christian Appelsved on flickr)
May 9, 2021

Typically, when I hear such a statement, I attempt to maintain my composure, but inevitably end up sadly succumbing to a work of the flesh, albeit one which Paul left of out Galatians, namely: theological rage resulting in a red-hot face, cartoonishly-raised eyebrows, and the steam of a thousand wrathful gods bursting forth from my ears.

Why, you might ask, would this produce in my soul such unsanctified scholarly steam? Is this not what the apostle Paul clearly communicates in Galatians 2-3? After all, he writes, “we know that a person is justified not by the works of the law but through faith in Jesus Christ” (Galatians 2:16). I am convinced, however, that this is a severely inaccurate interpretation that totally misreads Lutheranism (and Protestantism more broadly), Catholicism, and most importantly, Galatians. But if Galatians 2 is not an ancient polemic against legalism in favor of mere belief, what is Paul on about in this passage?

An important clue appears in Galatians 1:16 that helps to frame our exegesis. Paul notes that Jesus was revealed to be God’s Son in order that he might “proclaim him among the Gentiles.” Thus, threaded into the very fabric of Galatians from the get-go is a key theological theme, namely, that the ancient promise of God to bless all the families of the world through his people, Israel, is now being fulfilled by Messiah Jesus. Central to the narrative of Galatians—and to the story of salvation throughout the entirety of Holy Scripture—is the truth that Judaism does not exist as a sub-par foil for a superior religion called ‘Christianity.’ Rather, Christianity exists as the gracious fulfillment of the already gracious Judaism. Christianity is the “climax of the covenant,” as N.T. Wright has said, not its cancellation. The apostle John echoes this in his Gospel, when he asserts that from the fullness of Jesus “we have all received, grace upon (Greek: anti) grace” (John 1:16) which is more accurately translated “grace instead of grace” or “grace in the place of grace.” Thus, Holy Scripture tells the story of how God’s past, present, and future grace goes forth from Israel to the world through the faithfulness of Jesus Christ.

When Paul opposes Peter “to his face” (Galatians 2:11), this is not because Peter was a religious legalist, attempting to earn his way to heaven. Rather, Paul explains that Peter was acting hypocritically by leading others to walk in a way that was out of step with the multi-ethnic, cross-cultural nature of the gospel (see also Galatians 3:28). By refusing to eat with Gentile Christians when a faction of Jewish Christians arrived, Peter was essentially saying that there are actually two classes of Christians divided by ethnic lines. To be a ‘real’ Christian, Peter was inferring, all disciples (whether Jew or Gentile) must live according to boundary markers of the Jewish Torah (see Galatians 2:11-14). Paul was not having any of that.

Galatians 2:14-21 represents the essence of Paul’s response to Peter’s ethnically biased, gospel-impeding error. He highlights two central aspects of the authentic gospel: the badge of gospel belonging and the foundation of gospel belief.

It is now generally recognized that first-century Jews did not, by and large, think that their right covenantal status (for example “righteousness” or “justification”) with God came from morally perfect law-keeping. Rather, they believed that they were saved by grace which was demonstrated by their obedience to the Jewish Law. Thus, the “works of the law” spoken of here do not refer to generic religious activities, but to the specific ordinances of the Torah that marked out a Jew as a Jew, and that provided the framework for faithful (though fallible) Jewish obedience to God. Jewish works were not an instrument for obtaining acceptance from God; they were the evidence and expression of the salvation that they had already attained by God’s grace alone. Jewish believers worked from salvation; not for it.

In Galatians 2, the error that Paul is correcting is related to these Jewish works of the Law. Our right standing (“righteousness”) with God, Paul argues, is not demonstrated by badges of ethnic privilege but by the badge of faith for all who believe—whether Jew or Gentile. Thus, Peter’s hypocrisy is more than an instance of wrong theology or problematic practice; it is an assault upon the very nature of the gospel itself. This is because the error inadvertently ethnically limited to Israel what God meant to exponentially expand through Israel to all the peoples of the world.

Faith, however, is often assumed to function, not only as the badge, but also the foundation of our salvation. Yet, if our justification—our state of “being in the right” with God—is built upon the shifting sand of our own fallible faith, there is no blessed assurance but only a perpetual dread of the dark night of the soul produced by our own forthcoming inevitable failure and fully-assured faithlessness. Paul, however, places the theological emphasis elsewhere. The instances of justification by “faith in Jesus Christ” in verse 16 can also be translated as justification by “the faithfulness of Jesus Christ.” Grammatically, there is no way to tell which one Paul had in mind. But, theologically, both are true. Our imperfect faith testifies to our right standing with God by reaching out by grace to grab for dear life onto the perfect divine life of Jesus Christ on our behalf. This right standing, this justification, creates a new status and it makes us a new creation (see also 2 Corinthians 5:17)! It is both declarative and transformative. Faith becomes our badge of gospel belonging even as it rests upon something far more foundational—the infallible faithfulness of the crucified and resurrected Christ.

Lord of justification,
With great joy we receive the gift of salvation which is ours not because of our own efforts, but because of the saving work of Christ. Grant us full access to the glory of your salvation, an abundance that is more than enough for all humankind, for the sake of our redeeming Christ. Amen.