At this point in Luke’s Gospel we’re only just over a third of the way through the story, but already Jesus has set his face toward Jerusalem. 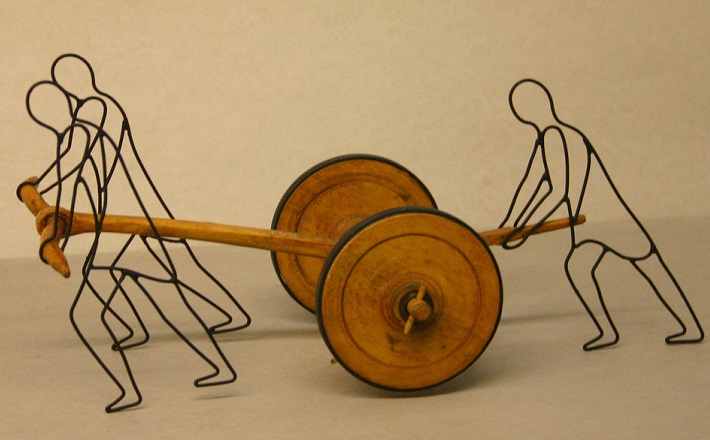 At this point in Luke’s Gospel we’re only just over a third of the way through the story, but already Jesus has set his face toward Jerusalem.

The disciples were distressed by this earlier in chapter 9, as heading toward Jerusalem is part and parcel of Jesus’ destiny on the cross, the terrible truth that brackets the revelation of his glory in the Transfiguration.

Now it’s time for the Samaritans to get offended for reasons of their own. Luke gives us little hint as to why, exactly, this irritated them so, but we can infer that the longstanding religious competition between the northern kingdom of Israel (or rather its dismembered remnant in Samaria) and the southern kingdom of Judah about the right place to worship has something to do with it (see also John 4 and Jesus’ conversation with the Samaritan woman).

It would be easy to gloss over the reference to the Samaritans, but details such as these are never accidental. Taking the long view of Luke-Acts — which starts in the most perfectly Jewish of environments with the conception of John by elderly Sarah-like Elizabeth and temple priest Zechariah, and ends in the most Gentile of environments with Paul headed toward a confrontation with Caesar in Rome — the mention of Samaria here is deliberate, a clue and a foreshadowing.

The Narrative Lectionary has provided ample opportunity to follow this very Lukan trajectory from Jews to Gentiles. Joseph has been the salvation of Egypt and many other nations. Elijah saved the widow of Zarephath. Jonah was forced to intercede for Israel’s number-one threat, Nineveh. Jeremiah and Joel allude to a forthcoming covenant with all flesh. Jesus reminds the synagogue audience of the intervention of the prophets with the widow of Zarephath and the Syrian general Naaman and tells Peter he’ll become a fisher of people.

A couple more relevant stories in Luke can be garnered outside the NL: most notably the healing of the centurion’s son in Luke 7 and of the Gerasene demoniac in Luke 8. Jesus’ ongoing confrontation with the religious officials of his day tends to rivet the attention, but Luke wants to move us toward a much wider horizon: the gathering in all of the nations estranged from God, starting (a bit ironically) with Israel and then heading outward. Acts 1 tips us off that Samaria is the next stop after Judea.

So the fact that the Samaritans reject Jesus here is a bit of a surprise, since Jesus is going to get them in the end. Adding to the confusion is that in the very next chapter, just after this snub in Samaria, Jesus turns around and makes the hero of his most famous parable a Samaritan. A Samaritan is also the only one of the ten lepers to return to Jesus to give thanks (Luke 17) — and Jesus even identifies him as “this foreigner”!

But it’s a mixed bag again when Philip goes preaching in Samaria (Acts 8), as the people there believe convincingly enough to persuade skeptical Peter and John, but one of their number is Simon Magus, the magician who tries to buy the Holy Spirit off the apostles (hence “simony,” the buying and selling of clerical offices).

The Gospels tell their points subtly and narratively rather than spelling things out in epistolary fashion. Yes, probably Samaria deserved — more than once — to have fire called down upon it. So did Judea and pretty much everyone else Jesus came across, hence the salutary warning to attend to the log in your own eye first (Luke 6:41-42). It’s easy to make grand promises of following Jesus wherever he goes, so long as the Lord respects the little caveats we put in place. Jesus concludes the day’s reading with “No one who puts a hand to the plow and looks back is fit for the kingdom of God,” which is really a nice way of saying, “No one is fit for the kingdom of God.”

And yet the encounter with Jesus changes things. The Word does not return empty, whether it’s the spoken Word or the incarnate Word. Samaritans who once disregarded Jesus can change so drastically as to rescue a beaten Jew at the side of the road. Samaritans who once disapproved of Judean religion can be so overcome by faith that they fall at Jesus’ feet in thanksgiving. Jews who would have willingly called down the fire of perdition on Samaritans can obey the Spirit’s prompting to preach in their midst and lay hands on them.

This is Luke’s grand tale: how the unfit, unclean, unfaithful nations are forged into one church by their meeting with Jesus. Only the unqualified need apply.

Lord Jesus, Great Teacher,
You place tremendous responsibility upon those who follow you. You demand more than we are often willing to give. You promise no safety, only that the way will be rough. Make us ready and willing to walk your rocky path and carry your subversive word to hostile ears, for the hope and promise of rewarding life in Jesus Christ. Amen.

Hide not thou thy face, Richard Farrant

At this point in Luke’s Gospel we’re only just over a third of the way through the story, but already Jesus has set his face toward Jerusalem.
Print All Text Print All Commentary