Reading the call of Jeremiah in Jeremiah1:4-10 together with the opening verses of the book (verses 1-3), offers the reader insight into the particular moment in time that Jeremiah is called to be God’s prophet.1 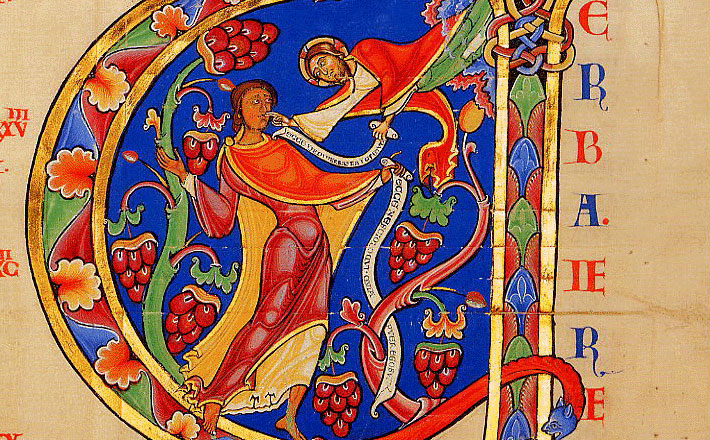 Reading the call of Jeremiah in Jeremiah1:4-10 together with the opening verses of the book (verses 1-3), offers the reader insight into the particular moment in time that Jeremiah is called to be God’s prophet.1

In Jeremiah 1:3 it is said that Jeremiah heard the divine word during the reign of King Josiah, Johiakim, and Zedekiah — thus the tumultuous years during which time Israel was attacked by the Babylonians and the inhabitants of Jerusalem taken into exile. For an exceedingly trying time such as this, the prophet Jeremiah is called.

A central theme in this first of the two lectionary texts for today regards the important role of God’s presence in the life of the prophet which calls to mind other famous call narratives such as Moses seeing the divine presence in the form of a burning bush (Exodus 3:1-6), Gideon being reassured of God’s presence in Judges 6:11-12 by being offered a sign, and Isaiah finding himself in the divine throne room, his lips being touched by a burning coal (Isaiah 6:1-5).

For people who had serious doubts about whether God is still with them, particularly as circumstances caused them to wonder whether God had not forsaken them, the call of Jeremiah emphasizes that God is intimately involved with God’s people. From before he was born, God already had Jeremiah in mind for this special vocation to be God’s prophet, before God formed (root ytsr) him in his mother’s womb, God already intimately knew him (verse 5). And in v 8, God ensures the prophet of God’s enduring presence — a promise that is beautifully illustrated by the reference to God touching Jeremiah’s mouth (verse 9), so giving him the words to speak.

Despite this affirmation of God’s presence, Jeremiah still voices his feelings of being incapable of fulfilling his mission. Echoing the psalms of lament in v 6, “Ah Lord God!”, Jeremiah states that he is very young, only a boy. With this hesitation, it is clear that as elsewhere in the biblical witness, God uses ordinary, fallible human beings to serve as God’s witnesses. Truly in the very difficult circumstances captured in the book Jeremiah, which would also throughout Jeremiah’s life cause him much pain and the suffering, the only way the prophet would be able to fulfill his calling is due to God working through him.

In verse 10, one finds a summary of the message Jeremiah was to proclaim. In the formulaic phrases that will run throughout the whole of the book, the prophet’s message captures the disaster that would see their world “plucked up and pulled down”, “destroyed and overthrown.” But in spite of this large-scale devastation that is captured in these four verbs, there is still the hope of building and planting which foreshadows the hope that will be preached in the Little Book of Consolation (Jeremiah 29-33).

Verse 10 is a great example of the prophet Jeremiah’s task of meaning making, i.e. giving the people, as the contemporary “prophet” U2 says so beautifully in their song, “Moment of Surrender,” “vision over visibility.” Kathleen O’Connor writes that through these formulized accounts of breaking/building; uprooting/planting and scattering/gathering that occurs throughout the book of Jeremiah, the chaos of war and its effects is captured into a standardized narrative that bestows some kind of order upon the chaotic events caused by the Babylonian invasion which may help the survivors of trauma to gain control over what has happened to them.2

The lectionary text for today also chooses to read a second text, i.e., the temple sermon in Jeremiah 7:1-10 together with the call narrative of Jeremiah. This temple sermon is interesting as it continues the theme of divine presence that featured so prominently in Jeremiah 1. However, in an ironic fashion, the promise of divine presence that was so important for Israel is turned on its head. So Jeremiah 7:1-10 challenges the idea that is found in many of the hymns of Israel: God is in his temple so we are safe. For instance in Psalm 48, the idea is found that God’s presence in the temple of Jerusalem is like a kind of protective shield over Jerusalem that makes her invincible (cf. also the temple liturgies in Psalms 15 and 24).

Jeremiah is faced with the reality that the temple and the city is not invincible as evident in the devastating Babylonian attacks that three times invaded Jerusalem and in 587 BCE destroyed the temple. Dealing with this loss, the prophet warns against an uncritical claiming of the promise of God’s presence for one’s own sake. God is not a security blanket, nor can God be used like an amulet or magic wand to ward off danger.

Even though one has to be careful not to merely uncritically accept the prophet’s view that sees a link between the terrifying suffering the people experienced by the hand of the Babylonian empire and the sins of the people (cf. the dominant view of the DTR historians in addition to most of the Prophets and the traditional wisdom reflected in e.g. the book Proverbs), one finds a powerful call to justice in verses 5-6. Continuing the theme of God’s presence, the prophet’s message implies: If God truly was in your midst in this worshiping community, you would be dealing justly with all people; you would not take advantage of those who are powerless; you would not commit violence against others. This perspective is captured in verse 11 when the prophet laments that the people have turned the temple into a den of robbers — a reference that would find its way into Jesus’ sermon when in Mark 11:17 he cleansed the temple from bloodsucking money lenders. The pericope ends with the ominous warning: “God is watching you!” (verse 11) — a haunting reminder of God’s presence that predicts nothing good for the perpetrators.

Furthermore, even while resisting the mechanistic view that there is in all cases a direct link between our actions and tragedy, it is important to realize that injustice destroys us all. It has been shown that both the perpetrator as well as the victim suffer great harm — the oppressor becoming less than human by treating the oppressed in an inhumane fashion.

God of cleansing, you showed the people of Israel how to behave in ways that honor you and your people. Show us how to behave so that your world might be blessed through our actions. We pray these things in the name of Jesus Christ, our Savior and Lord. Amen.

Come forth to be renewed, Robert Powell

Reading the call of Jeremiah in Jeremiah1:4-10 together with the opening verses of the book (verses 1-3), offers the reader insight into the particular moment in time that Jeremiah is called to be God’s prophet.1
Print All Text Print All Commentary