As we saw two weeks ago with the reference to compassion as a counter-cultural “suffering-with,” Jesus consistently chooses the “path of downward mobility.” 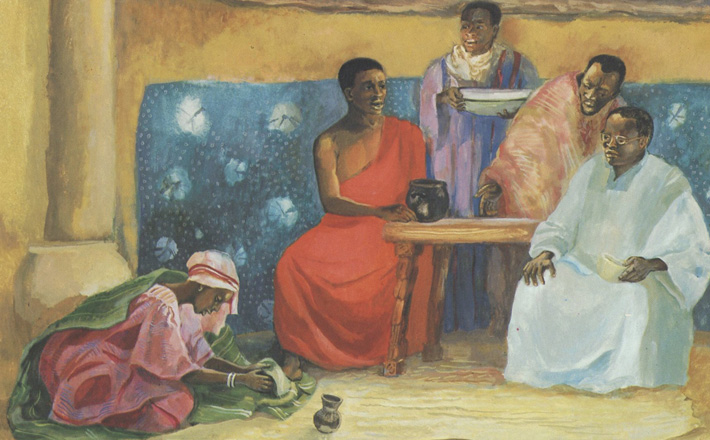 JESUS MAFA. Jesus absolves the pentitent sinner, from Art in the Christian Tradition, a project of the Vanderbilt Divinity Library, Nashville, Tenn.
February 19, 2017

As we saw two weeks ago with the reference to compassion as a counter-cultural “suffering-with,” Jesus consistently chooses the “path of downward mobility.”

In fact, in Luke’s Gospel, it is precisely because Jesus was “suffering with” the outcasts — showing them compassion — that those in power challenged his authority. This is the case in today’s passage, as well.

Simon the Pharisee, a religious leader, has invited Jesus to dine in his home (only Luke has Jesus being invited specifically to the home of a Pharisee). Suddenly, an uninvited, unnamed woman appears who is described simply as a “sinner in the city.” Without speaking, she weeps, wets Jesus’ feet with her tears, wipes them with her hair, kisses them, and anoints them with perfumed oil (verse 38).

Many commentaries point out that this anointing story could be read as preparation for Jesus’ death and resurrection — an ironic coronation for the rightful King of the Jews. Jesus makes Messianic overtones explicit in the gospel parallels to this story (Matthew 26:12; Mark 14:8; John 12:7). Others (taking their cue from Jesus’ indictment of Simon in 7.44-47) contrast the woman’s lavish act of hospitality and faithfulness with Simon’s failure to demonstrate the ancient virtue of hospitality, bringing shame upon his entire household. Still others point out that the setting in Luke 7:36-50 is similar to a Hellenistic symposium, an ancient genre in which a host invites guests to his home to dialogue about weighty abstract matters like love, friendship, or wisdom.

I wish to focus instead on a small detail of the story that often goes unnoticed: the fact that Simon objects “to himself.” Simon thinks, “If this man were a prophet, he would know who and what kind of woman this is who is touching him, that she is a sinner” (Luke 7:39). Let’s explore this a little more closely: the story of the woman anointing Jesus’ feet occurs in each of the other canonical Gospels, but in comparison with the other versions, only Luke makes it clear that Simon objects silently, “to himself.”

In Mark’s version, the onlookers object to the woman’s actions “among themselves” (Mark 14:4), which implies that they spoke aloud, (though perhaps only amongst themselves), rather than directly to Jesus. In Matthew, the disciples object openly (Matthew 26:28), and similarly, in John, Judas voices his concerns out loud (John 12:4-5). Only Luke highlights Simon’s unspoken thoughts, and Jesus’ ability to perceive them. We find in the Lukan version of this scene a fulfillment of the prophecy pronounced over the infant Jesus by Simeon that because of him, “the thoughts of many hearts will be revealed” (Luke 2:35).

Internal monologue is so common in today’s literature that we hardly even notice it, but ancient authors rarely used this device in telling their stories. When they did, it was typically at a moment of crisis in the story, when the hero is undergoing some intense internal conflict. In fact, authors like Homer, Ovid, and Virgil often followed a 3-part formula: (1) The introduction to the inner speech (2) Taking stock of the problem (3) The hero’s chosen solution.

Luke also tends to incorporate interior monologue into crisis situations, when the thinker wrestles with a difficult decision, but unlike these other ancient authors, Luke’s thinkers are not heroes. We never see Jesus “thinking to himself.” Instead, Luke tends to use internal monologue for characters who are not noble or heroic — in fact, they embody self-centeredness. This is a prominent theme in ancient Jewish literature: what one says to oneself indicates wisdom or foolishness.

Luke 7.36-50 is the first story in the Third Gospel where a character thinks to himself (the others are in Luke 12.17, 45; 15.17-19; 16.4-7; 18.18.4-5; 20.13). Like other ancient thinking characters, Simon faces a choice; he is deciding between two opposing views of Jesus’ identity — either Jesus is a prophet or he isn’t. The question itself demonstrates that Simon lacks love, hospitality, and true discernment. Furthermore, he clearly does not want to dialogue with Jesus; he simply “thinks to himself.”

When Jesus says, “Simon, I have something to say to you” (Luke 7:40), he may be implicitly contrasting his own willingness to dialogue with Simon’s failure to do so. Jesus then goes on to address Simon’s unspoken objection directly. Ironically, Jesus’ response proves exactly what Simon is questioning: he does, in fact, know the character not only of the one who is touching him (the woman), but also of the one who is judging him suspiciously (Simon).

Internal monologue has a significant function for an audience, as well. Giving voice to a character’s thoughts can uniquely engage readers’ or hearers’ emotions by inviting them to imagine their own personal reactions to similar situations. Luke invites us to ask, “What would I do in this situation?” “What would I say in my own heart?” In addition, Jesus’ response to Simon might serve as a useful prompt for us to think carefully about how we can transform our internal monologues (what psychologists today refer to as “self-talk”) into dialogues with God — into that “prayer without ceasing” to which 1 Thessalonians 5:17 refers.

Forgiving God,
Too often we take your forgiveness for granted. Too often we cling to our sin, believing that it is our right to harbor resentments and hatred. Be merciful to us, and show us the depth of healing that is offered when you forgive, for the sake of the one who recognized total surrender to forgiveness and offered it willingly, Jesus Christ our healer. Amen.

Forgive our sins as we forgive, James Laster

As we saw two weeks ago with the reference to compassion as a counter-cultural “suffering-with,” Jesus consistently chooses the “path of downward mobility.”
Print All Text Print All Commentary