Being a channel of God’s blessings to the entire world

Photo by Thom Milkovic on Unsplash; licensed under CC0.
September 18, 2022 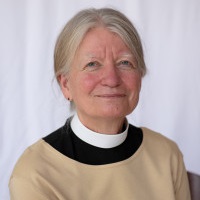 We are introduced in today’s lection to the “father in the faith” of Judaism, Christianity, and Islam. It is a familiar and simple story, until one begins to look even slightly under its placid surface.

The final verses of Genesis 11 introduce us genealogically to Abram and his immediate family. We are told that Abram had two brothers and a nephew whose father has died, he and his remaining brother marry, and Abram’s wife Sarai has no children. At the start of chapter 12, God calls to Abram and tells him to leave behind all he has known and journey to a new place. He is to leave his family, and yet takes not only his wife but also his nephew Lot with him on this new journey. God promises him three things: a place, a people, and a job. These are the basic necessities of every human. God seems here to be working with a stripped down version of the mid-twentieth century psychologist Abraham Maslow’s hierarchy of human needs, covering safety, belonging, and esteem/self-actualization.

Everyone needs a place of some sort where they feel they truly belong. I grew up in a succession of parsonages in Ohio and Illinois. I remember a succession of women on the parsonage committee of each church who would be sure to remind me and my brothers that the house we were living in was not ours. There was never any doubt in our minds that we didn’t live in “our” house. Still, through many moves I had my own bed and my own desk. They went with me every two or three years to our next house that wasn’t ours and provided a sort of security that protected me from the worst admonishments of those parsonage committee women. Abram is being told to leave a place of familiarity and go to a land he knows nothing about. How will he be able to find his place in a strange land? Abram will never own more land than a field with a burying cave which he buys at Sarah’s death (Genesis 23).

Everyone needs family, needs people with whom to feel a secure sense of belonging. Some of us have that blessing within our biological families; others find it among friends or colleagues or any number of fictive kin possibilities, including at times the church. Not only is Abram told to leave his extended family behind as he embarks on his journey, we have already been told that his wife is barren. He will finally have two sons with two different women—Ishmael with Hagar and Isaac with Sarah—as well as several rarely-remembered children with at least a third woman, Keturah, and some unnamed concubines (25:1-6).

There are some English translations that change the “blessing” verb from passive to active: “they will find blessing in you” (New American Bible Revised Edition) or “shall bless themselves” (Revised Standard Version). The importance of this is more than mere grammatical detail. It hinges on the notion of responsibility. If all the families of the earth are to be blessed through Abram and they are not blessed, whose fault is that? Is it not Abram’s responsibility to see that the blessings do indeed flow far and wide? Note also how the recipients of those blessings are described: “all the families on earth.” No modifiers that might seem normal are to be found here. The benefits are not limited to Abram’s family, nor to those who live near him, nor even later to his co-religionists. “All the families on earth” contains no delimiting adjective at all.

But if all those families are to bless themselves and they find the blessing lacking, where does the responsibility lie? Is it not within all those families of the earth themselves rather than with Abram? It is easy to see why some people might prefer this translation. The reality is that few preachers are familiar with the nuances of the ni’phal verb forms in Hebrew; even fewer congregation members would know or even be interested in them. The Hebrew and the intention behind it, I think, are clear. As long as the church wishes to think of itself as the “New Israel,” and to claim the blessings of Abram, we need to take this final part of verse 3 with utmost seriousness.

Why did God choose Abram? We are not told. What was Abram’s response? We have no direct speech from him in this entire pericope but he does pack up all that he owns and journey south. He is presented as a very rich man, with many goods and also many “souls” he had acquired in Haran. That is to say, he had enslaved folks with him, described as among his many possessions. His very wealth may be what gets him into some trouble in the second half of this chapter, when a famine arises in Canaan. But explication of that will have to wait for another Sunday when Genesis 12:10-13:1 can be read.

I give you my hands, Lord, Christopher Tambling

School of Theology, The University of the South